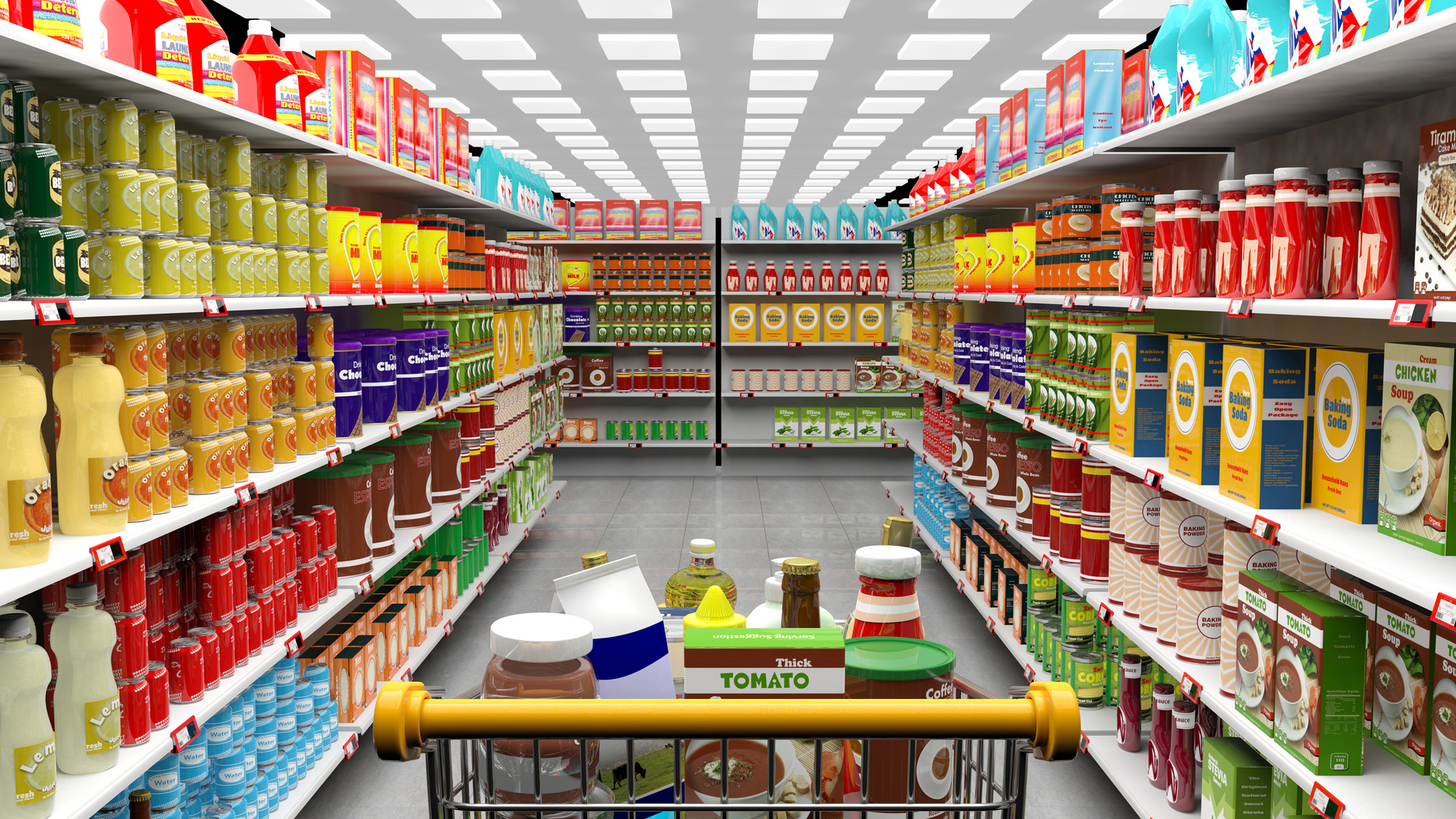 Several countries in Central and Eastern Europe (CEE) allege that some multinational brands and supermarkets’ private-label food products sold in Western Europe are of superior quality than those available under the same brand name and packaging in their home markets. Food producers contend that they often change composition or characteristics of food products in different countries to adapt to local taste preferences. However, this practice has led to resentment among the CEE consumers who feel that food producers deliberately offer inferior quality products in CEE to save on costs. Taking into consideration the results of comparative tests (conducted by few CEE member states) indicating dual quality of food products to be a fact, European Commission has come out in support of countries complaining about double standards of food products. As European Commission is working out an approach to tackle the issue of dual quality of food products, the packaged food industry must prepare for possible impact.

Slovakia, Hungary, Czech Republic, Croatia, Bulgaria, Poland, Slovenia, Estonia, and Romania are among the countries that have voiced their concerns over dual quality of food products. These countries claim that some of the packaged food products sold in their home markets differ in composition and ingredients when compared to same brands’ food products sold in western markets, for instance, some products contain lower quality of the primary ingredient (e.g. less fish in fish fingers) or contain ingredients considered as less healthy (e.g. sweeteners instead of sugar in beverages). Some countries also complain about the difference in sensory characteristics such as taste, texture, or color.

Investigations by national institutions of few CEE countries revealed that, despite being marketed under identical packaging, many packaged food products differ in composition and characteristics across European Union (EU) member states. In many cases, food products available in CEE markets were less healthy as compared to same brand products available in western markets such as Austria, France, or Germany. In 2015, the Prague University of Chemistry and Technology tested 23 products marketed under the same brand name in Czech Republic and Germany and uncovered differences in eight products. Slovak Agriculture Ministry and the State Veterinary and Food Administration (ŠVPS) conducted a similar study in 2016 and found discrepancies in nearly 50% of the products tested. In 2017, NEBIH, Hungary’s food safety authority, compared 96 products in Hungary, Austria, and Italy. The study included multinational brands, supermarkets brands, as well as some products with similar composition but not the same brand. While 25 of these products were found to be identical, 8 products were different in composition and 30 products exhibited difference in sensory characteristics, whereas 33 products indicated differences in both.

Multinational companies contend that this is a common business practice to change the composition of the branded products as per the local preferences and demand, difference in purchasing power, local sourcing requirements, variation in production lines, etc. EU legislation requires companies to properly label ingredients, but it does not mandate sale of the same recipe under the same brand name across the EU markets. However, it is difficult for consumers to identify the difference in quality of products based solely on information presented on the label. Consumers generally expect that products of the same brands with identical packaging and appearance are the same and thus the purchase decision is often based on brand image and reputation.

The frustration and dissatisfaction is building up among consumers in these markets as they feel as if they are being unfairly treated as second-class consumers. The dual food quality issue has now come under the political radar as the concerned countries have joined forces compelling the European Commission to take necessary actions to eliminate double standards in the quality of food products sold across EU. 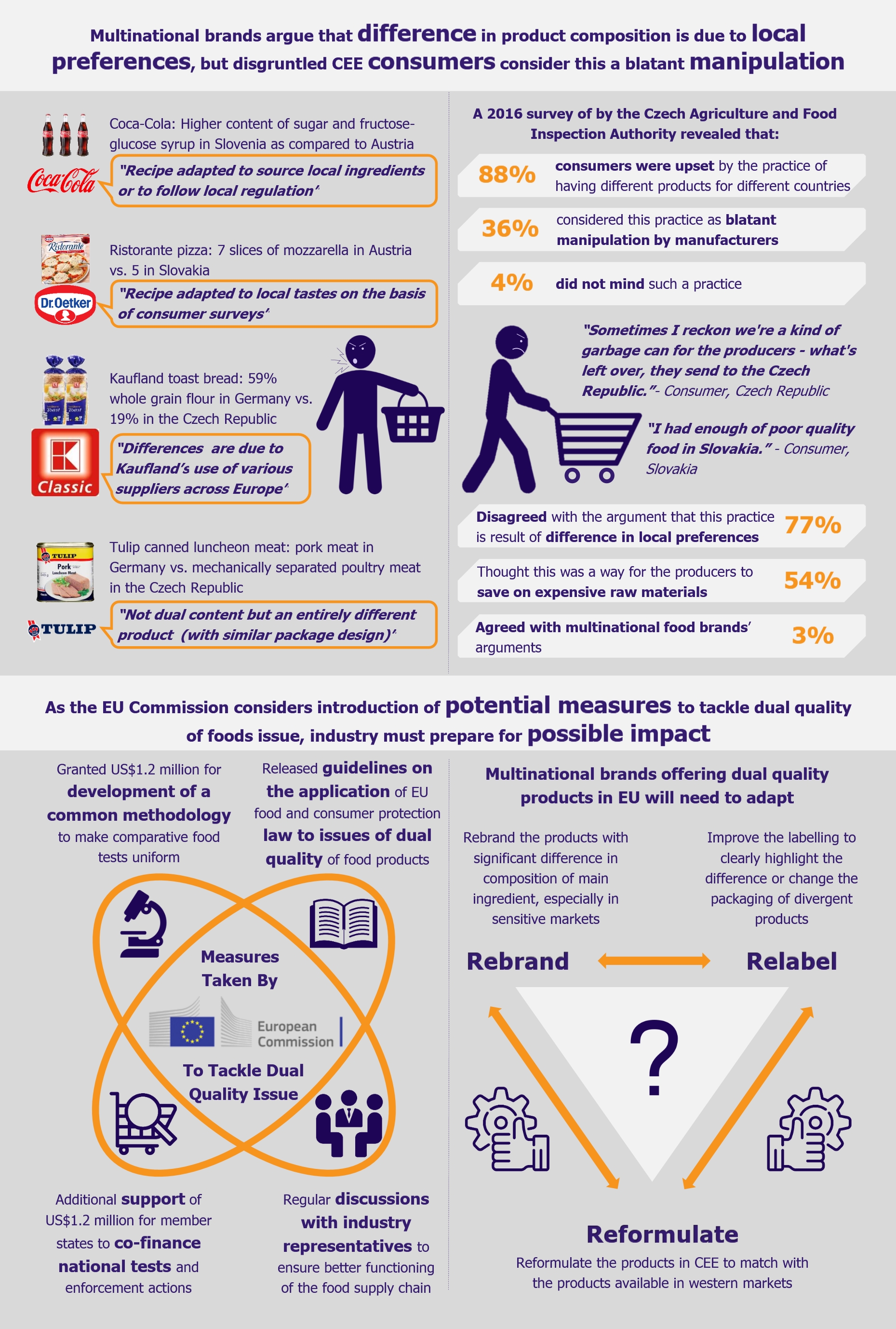 After years of perseverant diplomatic efforts, in 2017, European Commission finally acknowledged the issue of dual quality in food products and pledged necessary action against such practices as they may lead to single market fragmentation. In September 2017, the European Commission offered a grant of EUR 1 million (~US$1.2 million) to the Joint Research Centre (European Commission’s science and knowledge service) to develop a common methodology which can be used across the EU market for comparison of products. Additional EUR 1 million (~US$1.2 million) will be offered to member states for conducting further tests and to take actions to ensure compliance.

Alongside, European Commission also released guidelines highlighting application of the existing EU food and consumer protection legislation to determine whether a brand is acting in breach of these laws when selling products of dual quality in different countries. Unfair Commercial Practices Directive (UCPD) prohibit “a misleading commercial practice if in any way it deceives or is likely to deceive the average consumer, even if the information is factually correct, in relation to the main characteristics of the product”. National authorities are directed to determine on case-by-case basis whether consumers would still buy a product of a particular brand if they were aware that its main characteristics differ from those of the product sold under the same brand name and packaging in most EU member states – if they would not, then the company can be considered acting in violation of UCPD (though such a determination will undoubtedly be challenging with regards to maintaining objectivity and common fixed criteria). European Commission, along with the help of industry stakeholders, is also preparing a new code of conduct that will include standards to improve transparency and thereby avoiding the dual quality issue.

Dual quality of food products has been proven to be a fact and is perceived as an unfair distortion of EU single market. European Commission advocates to strengthen enforcement of existing consumer protection laws, however, some of the EU member states’ representatives are demanding legislative amendments as they believe that the current laws are inadequate to tackle the issue of dual food quality. CEE countries demand that the multinational brands must standardize their food products across the EU market to put an end to the discriminatory practice. However, this would require revision of EU food legislation, a proposal relished by neither the European Commission nor the industry.

In May 2017, Hungary submitted a draft legislation to European Commission to introduce a labelling obligation to include distinctive warning on dual quality food products. However, food law experts contest that such an obligation will restrict the food producers to distribute their products freely in Hungary, unless they bear an additional cost for labelling. This conflicts with article 34 of EU’s treaty that guarantees free circulation of goods within EU. However, if a similar proposal is considered for EU, it would force the food producers to include a warning on the labels, and this could be perceived as a mark of a potentially negative marketing.

It is about time that multinational brands offering dual quality products acknowledge the intensity of the allegations. Companies must prepare an acceptable justification for the difference in quality of their products, more specifically, if their products in certain markets are of inferior quality. Companies may consider reformulating their products in CEE markets to standardize their product offering across the EU bloc. For instance, in September 2017, HiPPs, a German baby food producer, announced that it would reformulate one of its Croatia-sold products to match with the German recipe.

Rebranding is another option that the companies could explore. Products with significant difference in composition could be launched under a new brand name exclusively for that local market. Companies for whom rebranding and reformulating is not deemed feasible, should consider relabeling and repackaging their products to clearly differentiate the products across markets. For instance, Tulip is considering changing the packaging of canned luncheon meat in the Czech Republic to differentiate it from the similar product available in Germany. An unquestionable fact here is that whichever approach companies take to address the dual quality issue, it will result in additional costs, which might affect the products’ prices and make them less accessible, especially for consumers from low-income sections of the CEE population.

For the multinational brands offering identical products across EU, the dual quality issue can be seen as an opportunity. Such companies could consider multilingual labelling informing consumers that same product is sold across markets, and this approach would also help standardize the packaging and labelling across the region. Further, these companies could also benefit from a positive PR and marketing campaigns to reinforce the fact that they consider all their customers equal across EU single market.

Packaged food producers who have presence only in Western Europe are presented with a unique opportunity to expand in CEE markets. As the general perception in CEE is that packaged food products made in western EU countries are often of superior quality, the western-recipe version of a given product may be well received by the CEE consumer.

Local e-tailers as well as retailers in border cities can also be at gain. For instance, Czech e-tailers such as Rohlik.cz and Košík.cz have added special sections on their websites offering German products; likewise, supermarkets in German towns such as Altenberg and Heidenau have put up sign in two languages, due to increasing footfall from Czech cities across the border.

As the debate on dual quality of food products is gaining heat, multinational brands such as HiPPs and Tulip are already considering changing product composition or packaging to reflect the differentiation of their products across member states. Though food producers are not required to offer standard products across the EU countries, they will need to justify the difference in their products, and failure to do so may lead to legal action. The recent guidelines announced by European Commission are more of a soft warning to food producers. If the issue remains unresolved, then European Commission may consider more extreme measures. European Commission warned that if the situation does not improve, it will make the name of brands that are involved in the practice of dual quality publicly available. This might severely impact the brand image of these multinational brands in consumer’s view. Revision of packaging and labelling law is also one of the recommended alternatives that might be explored as a last resort.