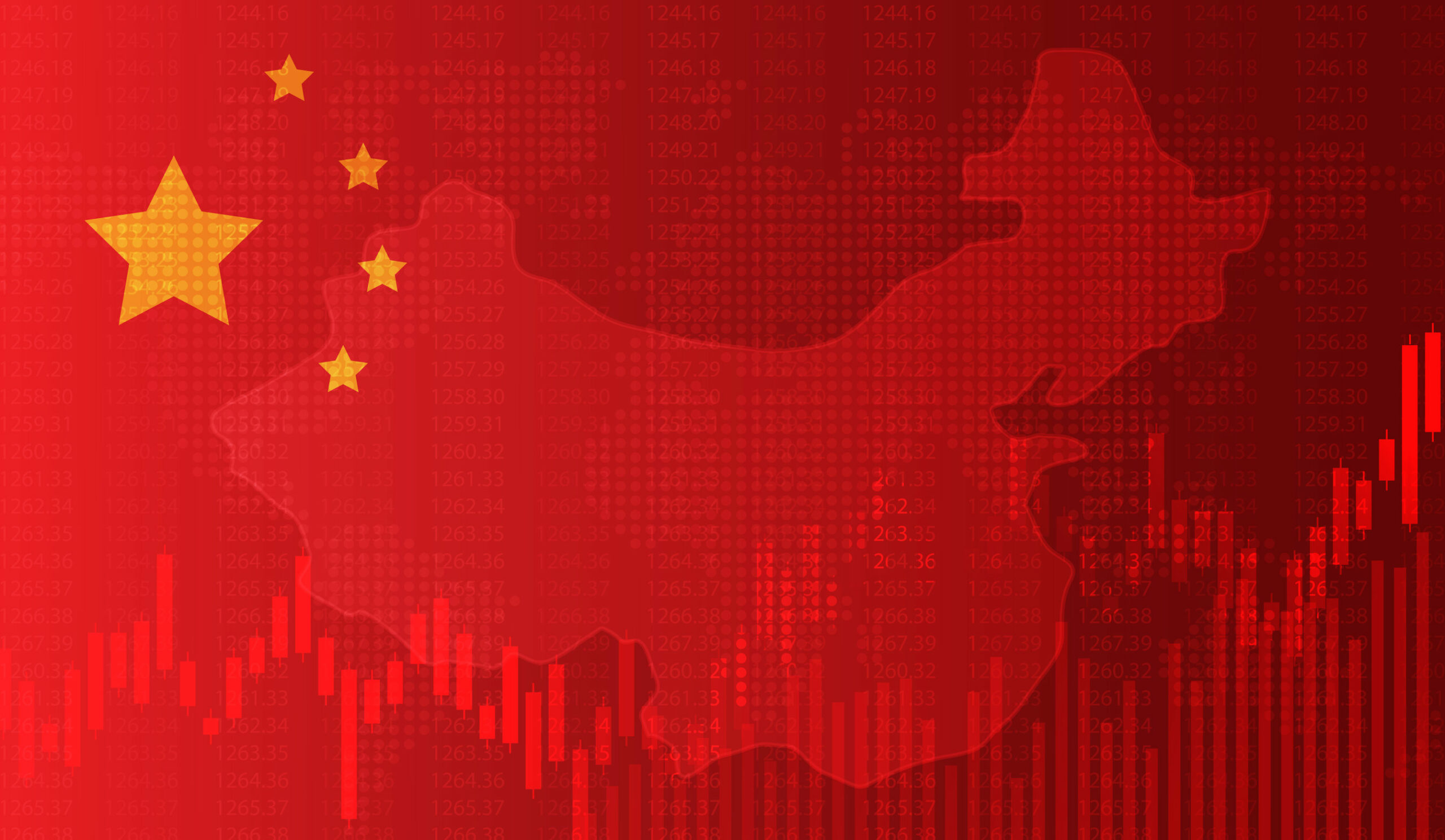 In 2013, China launched its infamous Belt and Road Initiative (BRI), which has gone about developing several infrastructure projects across developing and underdeveloped countries across the globe. However, BRI has faced significant criticism as it brought heavy debt for several countries that are unable to pay the loans. Moreover, it is believed that China exercises significant political influence on these countries, thereby building a sort of dominance across the globe. To counter this, several developed economies have come together to launch alternative projects and partnerships that facilitate the development of infrastructure across developing/underdeveloped countries without exerting significant financial and political bindings on them. However, the main aim of these deals seems to be to keep a check on China’s growing might across the Asian and African continent.

Read our previous related Perspectives: OBOR – What’s in Store for Multinational Companies? and China’s Investments in Africa Pave Way for Its Dominance

China’s BRI program has signed and undertaken several projects since its inception in 2013. As per a 2020 database by Refinitiv (a global provider of market data and infrastructure), the BRI has signed agreements with about 100 countries on projects ranging from railways, ports, highways, to other infrastructure projects and has about 2,600 projects under its belt with an estimated value of US$3.7 billion. This highlights the vast reach and influence of China under this project and its growing financial and political power across the globe.

Over the years, BRI initiative has been criticized for being a debt-trap for developing and underdeveloped nations, by imposing heavy debt through expansive projects over the host countries, the non-payment of which may lead to significant economic and political burden on them. While the USA, the EU, India, and Japan have been some of the most vocal critics of the BRI program, several participating countries now voice a similar message as they have enveloped in high debt under these projects.

In one such example, the Sri Lankan Hambantota Port was built under the BRI scheme by China Harbor Engineering Company on a loan of nearly US$1.26 billion taken by Sri Lanka from China. The project was questioned for its commercial viability from the very beginning, however, given China’s close relationship with the Sri Lankan government, the project pushed through. As expected, the project was commercially unsuccessful, which along with unfavorable re-payment plan resulted in default by Sri Lanka. Thus, in 2017, the Chinese government eventually took charge of the port and its neighboring 15,000 acres region under a 99-year lease. This transfer has given China an intelligence, commercial, and strategic foothold in a critical water route.

In a similar case, Montenegro is also facing a difficult time repaying its debt to China for a highway project under BRI. In 2014, Montenegro contracted with China Road and Bridge Corporation (CRBC) for the construction of a highway to offer a better connection between Montenegro and Serbia. However, the feasibility of the project was questionable. The Montenegro government took a loan of US$1.59 billion (85% of the first phase of the project) from China Exim Bank at a 2% interest rate over the next 20 years. However, the project, which is being undertaken by Chinese companies and workers using Chinese materials, has faced unplanned difficulties in completion, has put significant financial pressure on the Montenegro government. This is likely to further degrade the country’s economy, delay its integration with the EU, and leave it vulnerable to Chinese political influence. While the EU has refused to finance the loan altogether, it is offering special grants and preferential loans to the country from the European Investment Bank to facilitate the completion of the highway.

Moreover, as per a 2018 report by Center for Global Development, eight BRI recipient countries – Djibouti, Kyrgyzstan, Laos, the Maldives, Mongolia, Montenegro, Pakistan, and Tajikistan – were at a high risk of debt distress due to BRI loans. These countries are likely to face rising debt-to-GDP ratios of more than 50%, of which at least 40% of external debt owed to China in association to BRI related projects.

Owing to the growing concern over increasing Chinese investment debt, several countries are now looking to reduce their exposure to Chinese investments and financing. In 2018, the Myanmar government, in an attempt to avoid falling deep into China’s debt-trap and becoming over-reliant on the country, scaled down China-Myanmar Kyaukpyu port project size from US$7.5 billion to US$1.3 billion.

China’s long-term ally, Pakistan, also opted out from China’s BRI in 2019, exposing some serious flaws with the project. In 2015, the two countries unveiled a US$62 billion flagship project under BRI, called the China-Pakistan Economic Corridor (CPEC). While it was started with an ambition to improve Pakistan’s infrastructure (especially with regards to energy), this deal resulted in severe debt woes for Pakistan as the nation started to face a balance-of-payment crisis. This in turn resulted in Pakistan turning to International Monetary Fund (IMF) for a three-year US$6.3 billion bailout package. Pakistani officials have even claimed that the CPEC project is equally (if not more) beneficial for China in terms of gaining a strategic advantage over India and by extension the USA. Thus, given its partial failure and increasing financial pressure on Pakistan, many ongoing projects under CPEC have been stalled or being rebooted in a slimmed-down manner.

Similarly, more recently, in April 2021, Australia scrapped off its deal it had with China under BRI, stating the deal to be over ambitious and inconsistent with Australia’s foreign policy. 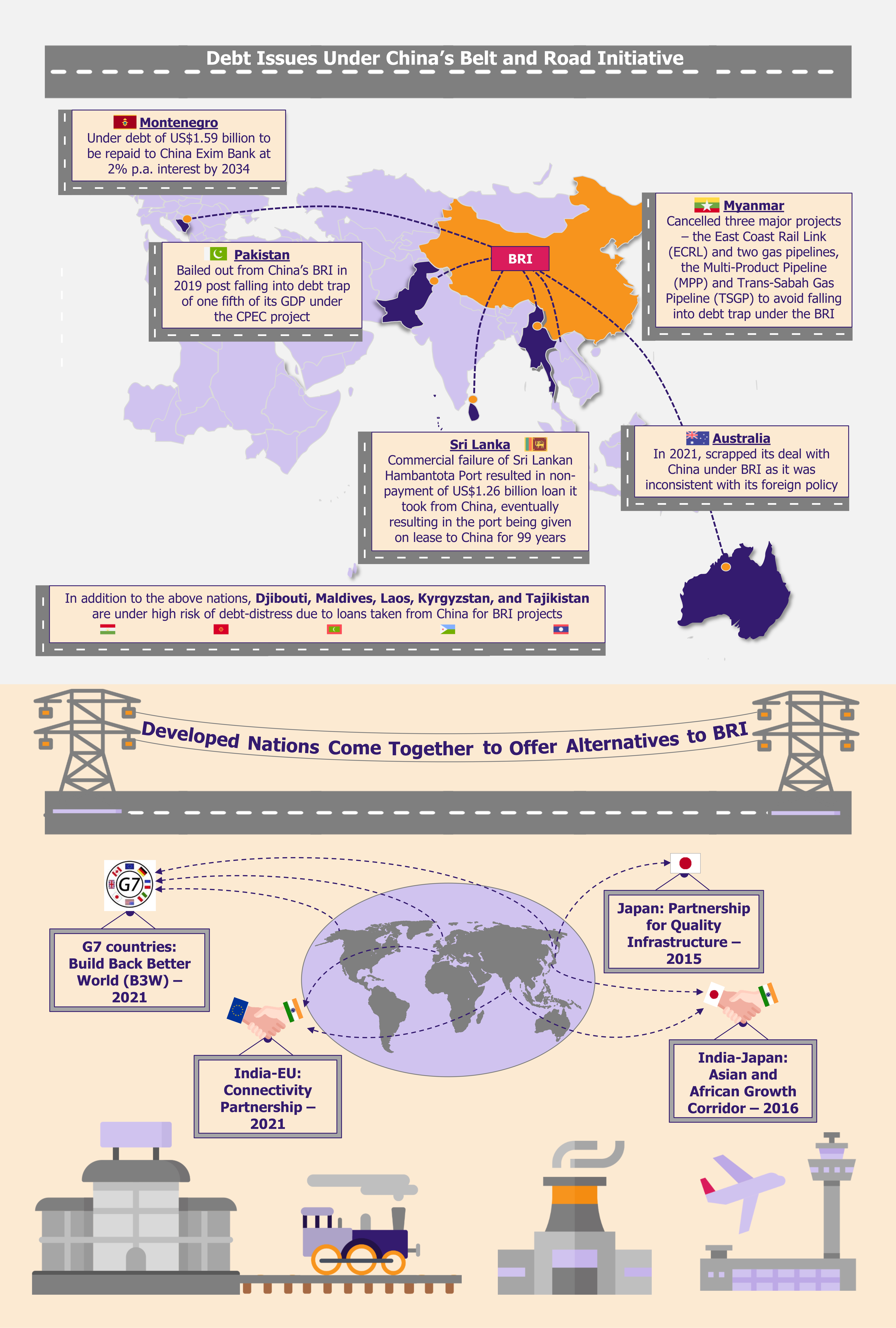 Given the push against BRI, several developed nations have come out with alternative infrastructure plans, either individually or in partnership with each other. The key purpose of this is to not only offer more viable options to developing and underdeveloped nations but also to keep a check on China’s growing global influence.

In one such move, in May 2015, Japan launched a ‘Partnership for Quality Infrastructure’ (PQI) plan, which came out as a direct competitor to China’s BRI. The PQI Japan (in collaboration with Asian Development Bank (ADB) and other organizations and countries) aimed at providing nearly US$110 billion for ‘quality infrastructure investment in Asia from 2016 to 2020. Although, on one side, this initiative is intended to secure new markets for Japanese businesses and strength export competitiveness to further bolster its economic growth, on the other side, politically PQI is a keen measure to counter China’s influence over its neighboring countries.

Just like Japan, India has also been a staunch critic of China’s BRI as it feels that the latter uses the BRI to expand its unilateral power in the Indo-Pacific region. Thus, to counter it, India, formed an alliance with Japan in November 2016, called ‘Asia-Africa Growth Corridor’ (AAGC).

The alliance aims at improving infrastructure and digital connectivity in Africa and connecting the continent with India and other Oceanic and South-East Asian countries through a sea passageway. This is expected to boost economic collaborations of India and Japan with African countries by enhancing the growth and interconnectedness between Asia and Africa.

The alliance claims to focus on providing a more affordable alternative to China’s BRI with a smaller carbon footprint, which has been another major concern in BRI project execution across Indo-Pacific region. The emphasis has been put on providing quality infrastructure while taking into account economic efficiency and durability, inclusiveness, safety and disaster-resilience, and sustainability. The countries do not have an obligation of hiring only Japanese/Indian companies for the infrastructure development projects and are open to the bids from the global infrastructure companies.

In more recent times, in May 2021, the EU and India have joined hands for a comprehensive infrastructure deal, called the ‘Connectivity Partnership’. This deal aims at strengthening cooperation on transport, energy, digital, and people-to-people contacts between India and the EU and developing countries in regions across Africa, Central Asia, and the Indo-Pacific region. Moreover, it aims at improving connectivity between the EU and India by undertaking infrastructure development projects across Europe, Asia, and Africa. It also focuses on providing a more reliable platform to the already ongoing projects between the EU and India’s private and public sectors.

While the two partners claim otherwise, the deal seems to be their collective answer to China’s BRI and its growing influence in the Asian, African, and European belt. Unlike BRI, the EU-India Connectivity Partnership aims to follow a clear rule-based approach to have greater involvement from the private sector with backend support from the public sector of both sides. This protects the host country against heavy debt and in turn restricts the level of political influence that both sides may have on the host country. This advantage over China’s infrastructure deal makes this project a serious competitor to the BRI in this region as host countries are most vary of falling into a debt-trap with China.

Another recent initiative to dethrone the BRI has been the ‘Build Back Better World’ (B3W), which has been undertaken by the Group of Seven (G7) countries in June 2021. This project, led by the USA, is focused on infrastructure development in low- and medium-income countries, and aims to accomplish infrastructure projects worth US$40 trillion in these countries by 2035. Further, the project is intended to mobilize private-sector capital in areas such as climate, health, digital technology along with gender equity and equality involving investments from financial institutions of the countries involved.

This project claims to be based on the principles of ‘transparency and inclusion’ and intends to cease China’s rising global influence (through BRI) as it aims to make B3W comparatively more value-driven, market-led, and a higher-standard infrastructure partnership for the host country. To ensure inclusivity and success of the project, the USA invited other countries such as India, Australia, South Korea, and South Africa to join the project. However, considering the nascent stage of the B3W development, the proceedings and details of the project are not explicitly clear, however, given that its intention is to help the USA compete with the BRI, it is expected to be well-funded, robust, and inclusive.

China’s BRI started on a very high note, garnering multi-billion-dollar infrastructure projects across a host of Asia, African, and European countries. However, over the last couple of years, increasing number of countries have become wary of its inherent problems, such as looming debt, increasing Chinese influence, and incompletion of projects. This has helped shift the momentum towards other developed countries that have for long wanted to counter China’s growing global influence. Using this opportunity, Japan, India, the EU, and the USA have come up with alternative infrastructure deals to compete with the BRI.

That being said, BRI will not be easy to shove aside as China has been in this game for several years now and has a significant time advantage. While countries such as India can try to compete, they do not have the financial might to take up projects that are strategically important and commercially viable.

Further, several of the alternative projects, such as India-EU Connectivity Partnership and G7 B3W aim to significantly involve the private sector for investments. While this is good news for the host countries where the project will be undertaken, private players will definitely be more concerned about financial viability of their investment and may not be able to match the BRI investment values, debt rates, etc. Moreover, geographic location puts China in an advantage for projects in the Asian region (when compared with the USA and the EU).

Therefore, while the attempt to dethrone China’s BRI has gained significant momentum and found proper backing, it is something that cannot happen in the short term. However, given the growing anti-China sentiment, it can be expected that with the right partnerships and project terms, BRI may start facing some serious competition from global powers across the globe.