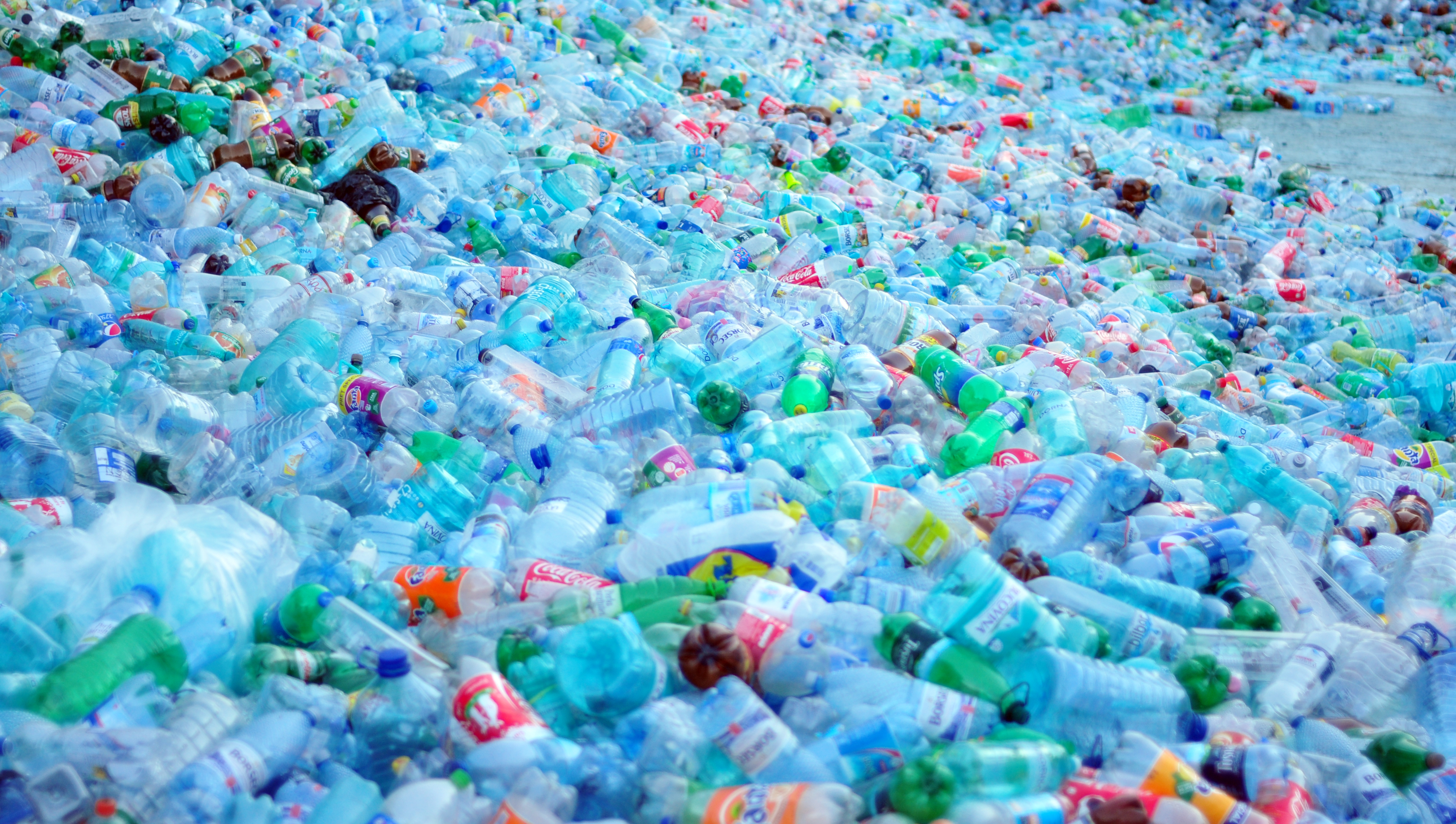 It is not often that one can hear that a US$100 billion industry is in tatters, however, this is currently the reality in case of the US recycling industry. For years, the USA has been dependent on waste exports, to countries such as China, India, and Korea. However, that dependence has now placed the USA in a very difficult position, as the implementation of National Sword policy by China, the largest export destination for US waste, amidst the China-USA trade disputes, resulted in waste exports coming to a virtual halt since the start of 2018.

With waste generation growing, the USA has been left scrambling to look for alternative destinations for its waste, the largest being India, Malaysia, Thailand, and Vietnam, albeit none of them capable of completely compensating for waste exports to China. Recently, in March 2019, India also banned imports of plastic waste, eliminating another major avenue through which the USA could get rid of its trash.

US dependence on exports for waste recycling meant that the development of domestic recycling facilities has been neglected. The country’s domestic waste recycling sector is now incapable of handling the ever-increasing waste, a major chunk of which ends up in landfills, creating other environment and health-related problems.

However, where there are challenges, there are opportunities as well. We look at what challenges the USA currently faces, and how the recycling industry is trying to adapt and come up with potential solutions to the country’s waste problem.

Traditionally, US municipals have depended on external companies to dispose their waste. Most disposal companies follow a linear model, under which they collect the municipal waste and then segregate it for further processing (with majority of it previously being exported to China). This dependence on waste exports led to limited investments in developing or expanding the domestic recycling infrastructure, which the country has been left to rue in the wake of the waste import ban imposed by China and India.

Limited capacities have put extra burden on the system. Moreover, elimination of revenue from scrap sales to China puts additional economic pressure on waste processors. As a result, many waste collection agencies have either suspended waste pickup or raised prices to dispose of waste. Municipals too have to bear greater economic burden. Cities, which were earlier paid for their waste, are now being charged significant amounts for hauling waste.

Current waste disposal process is not up to the mark

Another key challenge is the lack of sorting at source, i.e. at the household level. Due to consumer’s preference, the USA follows a single-stream recycling system, where all recyclables are collected in the same receptacle. With no segregation happening at this stage of waste collection, the processor is responsible for sorting different type of materials for recycling.

However, the lack of capacity and established infrastructure makes it difficult and expensive to sort these waste materials, resulting in most of the waste being discarded, either ending up at an incineration facility or a landfill, which are much more cost-effective compared with recycling. Currently, only 10% of plastic waste generated in the USA is recycled, while 75% of it is discarded in landfills (remaining 15% being incinerated to form electricity – but that too has its critics due to the pollution caused). 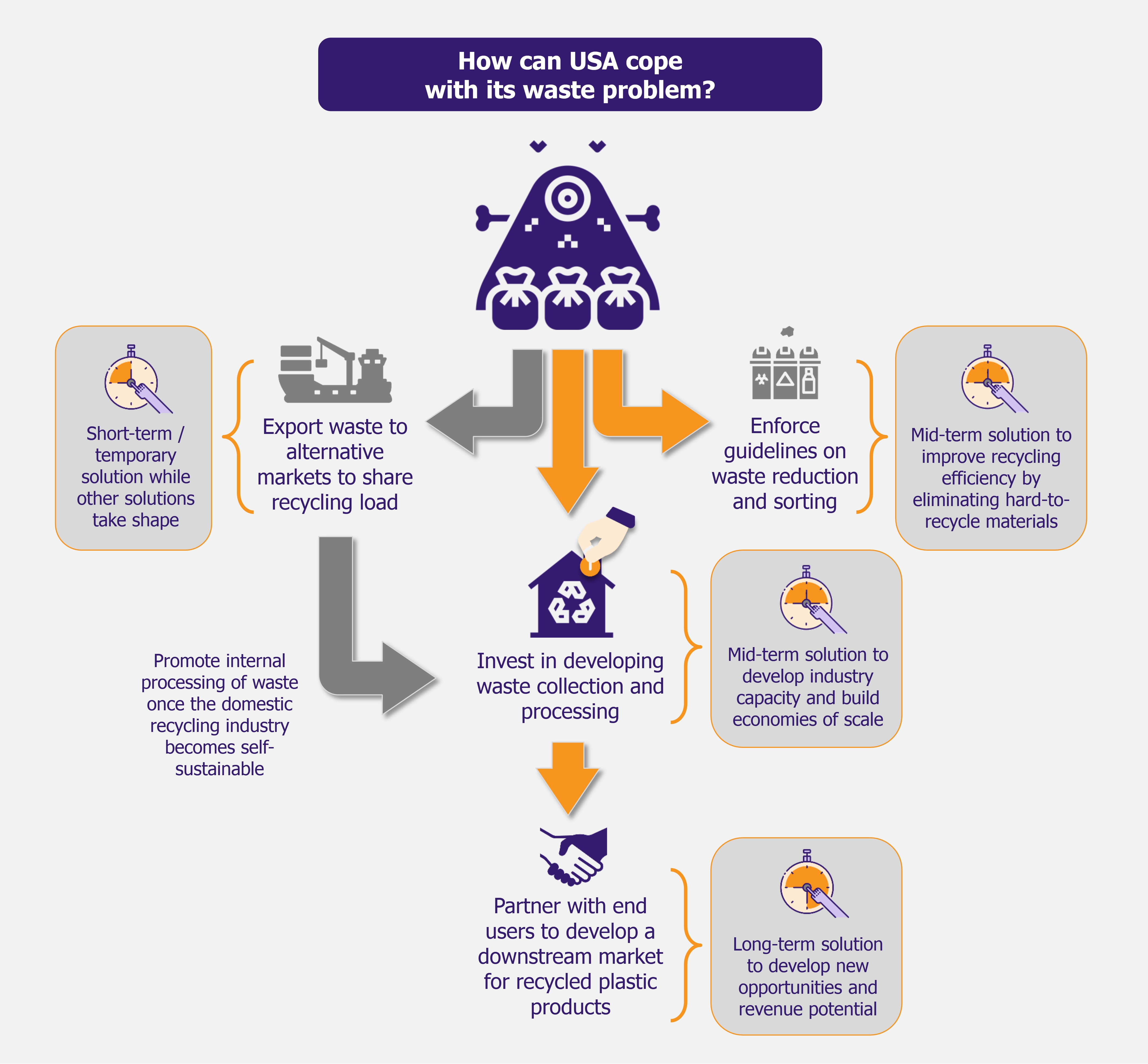 Impacted by the loss of the key buyer and facing own limited capacities, several smaller recycling companies reliant on exports to China have shut down their operations, while several other recyclers have been forced to reassess market strategy from exports to processing.

With limited capacities and waste production growing, there is a need to improve the overall efficiency of waste sorting and recycling process. Companies across Europe and Asia Pacific have been researching and developing trash robots (also called “trashbots”) capable of collecting, sorting, and recycling waste and other scrap materials.

The trend is now catching up in the USA as well. Waste Management has already installed a waste sorting robot at one of its material recycling facilities, and plans to install three more robots in 2019. The company is also planning to install additional screeners and optical sorters at its facilities.

With a significant focus on promoting sustainability, several other companies also see recycling as a promising business opportunity, thereby driving investment in recycling infrastructure. GDB International, a US-based company selling plastic scrap to international markets, was impacted by the Chinese import ban, and decided to invest in developing its own recycling capabilities. The company plans to recycle plastic scrap domestically, and sell recycled plastic pellets to plastic product manufacturers within the USA and abroad.

Chinese and Indian waste import bans have jolted the US recycling industry as a whole, pressing it to search for a solution to its swelling problem. The industry is witnessing problems which question the entire structure of the industry and challenge companies to reconsider their commonly utilized business model – shifting from a linear model to a circular economy.

The most obvious solution for the US recycling industry, in the short term, is to consider alternative waste destinations, such as Vietnam, Malaysia, and Thailand, to share the waste burden. However, since none of these markets are developed enough to sustain over a long term, this solution, at best, can be considered a temporary fix.

The government needs to take several initiatives to lay a strong foundation for a revamped recycling industry, such as banning or restricting the use of hard-to-recycle plastics (including single-use plastics such as straws and disposable spoons), and laying down strict guidelines for sorting of waste already at the household level, which will improve the efficiency and costs associated with the recycling process.

A coalition of plastics players and other industry groups is lobbying for provision of funds by the US government, an investment of US$500 million, to help develop local waste management systems. If disbursed, these investments will enable development of the recycling industry until it becomes self-sufficient in handling domestic waste. Once this happens, the costs of disposing and processing waste are also likely to reduce.

In the long run, significant private investments in building domestic recycling capacities will be required to effectively address the ever-increasing waste. Excess waste, which was earlier exported to China and India, offers a sustainable source of raw materials to justify these investments in developing the recycling infrastructure. Furthermore, increasing focus on sustainability is driving a demand for recycled raw materials. Development of downstream recycling and processing capabilities can also enable recycling companies to tap this lucrative business opportunity. Partnerships with end users are likely to open further revenue stream.

While private investments in recycling infrastructure have started flowing in and the rate is expected to pick up, these investments will take time before the added capacities actually become operational. The success of these investments, however, will depend on how effectively the US government is able to execute initiatives to aid growth of domestic recycling industry. 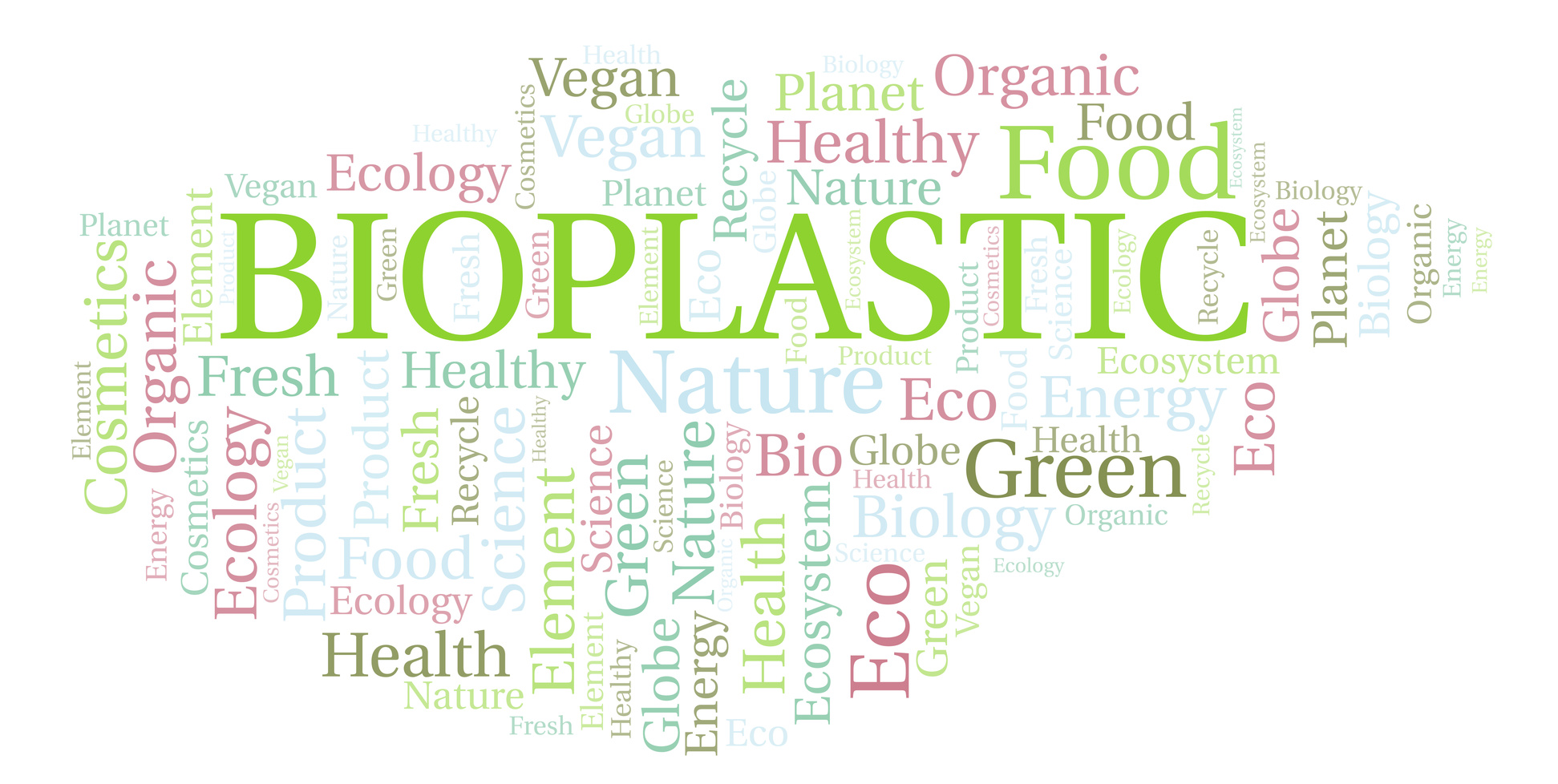 The term ‘bio-plastics’ appears fascinating as it seems to revolutionize what plastics have always stood for. Being derived from plants and having the ‘bio-‘ prefix in their name, these plastics are considered to offset the main underlying negatives of conventional plastics, thus seem like ideal products. However, there is more to bio-plastics than meets the eye, as they carry their own fair share of baggage.

We are surrounded by plastics all the time and everywhere – may it be at home, at work, or in transit. The use and abuse of products containing plastics has increased exponentially over the past few decades, fuelled by low oil prices and limited awareness about their ill-effects on the environment. But the tide is turning now, with bio-plastics entering the stage.

Still in their nascent stage of commercialization, bio-plastics are portrayed as able to revolutionize the plastics industry over the next couple of decades. Playing on the key drawbacks posed by traditional plastics, such as limited supply and rising prices of feedstock as well as environmental concerns, the currently insignificant bio-plastic share of about 1% of overall demand for plastics is expected to soar to about 25% over the next 15-20 years. Advanced technical properties, potential for cost reduction (owing to easily available feedstock), biodegradability options, and higher consumer acceptance, are some of the key factors that usher the market to higher growth rate, especially in products such as PET bottles and disposable cutlery used by foodservice industry. While the market stands to grow at about 20% a year, there are also several factors that conspire to withhold the potential of the market.

First and foremost, bio-plastics cannot replace conventional plastics in all applications, and at this stage of development and commercialization are also known to generally offer poorer quality. While they are suitable for disposable products, they cannot yet replace traditional plastics where stability of material properties and durability over time is necessary, therefore, discouraging traditional plastics’ substitution on a mass scale.

At the bio-plastics production end, large land requirement for bio-feedstock (corn, sugarcane, etc.), which leads to conversion of forests into agricultural lands and increases the use of fertilizers and pesticides, may just negate the ecological benefits of bio-plastics to a certain extent.

At the consumption side, the key challenge is the lack of dedicated end-of-life facilities for bio-plastics. There is limited infrastructure for industrial composting and incineration worldwide, which largely limits the benefits reaped from the biodegradable property of these plastics. Moreover, bio-plastics are not uniform and vary greatly, thereby require different end-of-life infrastructure (including segregation, disposal, composting, and incineration). This makes it a much more complicated and expensive process. The recyclability of bio-based plastics is also limited and relatively more expensive. Furthermore, the mixing of conventional plastics and bio-plastics in the recycling stream results in poorer quality of the resultant recycled plastic.

Lastly, the traditional plastics market is much more developed. Bio-plastics on the other hand, are still in the pilot production stage and generally lack economies of scale, thereby costing much more than synthetic plastics. Instead of substituting incumbent plastics, the bio-based plastics market currently caters to a niche audience, which is highly environmentally-conscious and is willing to pay a premium for such products.

Despite the mixed opinions on bio-plastics, several small- and large-scale bio-plastic adoption programs are increasingly undertaken by leading consumer goods producers. It can be expected that these programs and investments will eventually lead to economies of scale for bio-plastics, but as of now it seems that these players have been jumping into the bio-plastics arena mainly for marketing and PR-building purposes, as the group environmentally-conscious consumers expands globally. Here are some examples of investments and innovations by leaders in bio-plastics adoption-

Notwithstanding the many benefits of using bio-plastics, they are not the perfect eco-friendly products the world would want them to be – at least at the current level of development and commercialization. While the benefits reaped from them at this point are marginal, companies are marketing these new plastics as the revolutionary heroes that will save our environment. However, with a strong momentum towards innovation to improve product quality, huge investments by leading players, drive towards commercialization, and a host of government initiatives, it seems too early to judge the industry as of yet.