The whole world has its eyes on China and the USA as both nations are threatening to impose massive tariffs on each other in a ‘tit for tat’ trade skirmish. According to the Trump administration, the proposed tariffs are intended to punish China for pursuing its protectionist policies, currency manipulations, and alleged intellectual property (IP) theft. Fears of a possible full-scale trade war between the world’s two largest economies have caused global stock exchanges to plunge and cautioned investors as well as governments across the globe. There is no doubt that a trade war would not only hurt both economies, but it would also impact the overall global economy. As the proposed tariffs would pertain, amongst others, to vehicles and auto components, we are taking a look at potential implications this trade war might have on automotive industry in both countries.

Since his presidential campaign, president Trump has criticized China for pursuing protectionist policies, currency manipulations, and IP theft. In order to punish China for its current trade policies, and to reduce USA’s huge trade deficit with China, Trump proposed tariffs on approximately US$50 billion worth of Chinese goods coming into the country. Of these, approximately US$34 billion worth of Chinese goods including vehicles and auto parts will be subject to new tariffs starting from July 6, 2018, while the remaining US$16 billion are still under review.

The total automotive trade between the USA and China stood at US$33.9 billion in 2017. At present, in the USA, a 2.5% import tax is levied on imported vehicles and components. The current government proposes to raise this to 25% for vehicles and parts coming from China. China charges around 25% tax on vehicle imports from overseas, and now have threatened to add an additional 25% for vehicles built in the USA. Although these are just proposals for now, if they do get implemented, they will have implications on the entire automotive ecosystem in both countries, including carmakers, dealers, and auto parts manufacturers, and suppliers. 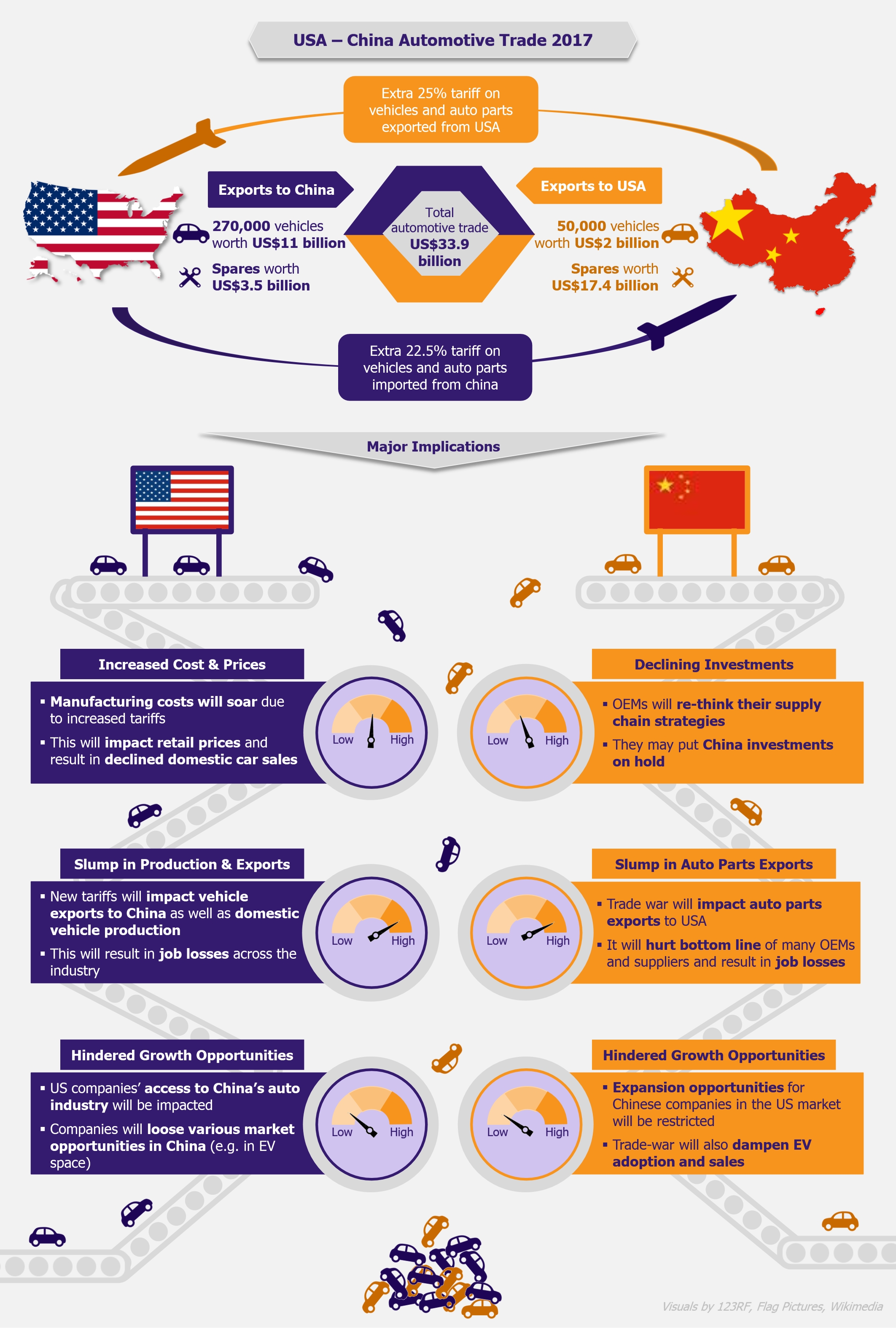 A trade war with China will make domestic-made cars more expensive at home and less competitive in China. As a significant portion of the auto components and parts used by the US carmakers is sourced from China, increased tariffs will lead to increased production costs. Experts fear that OEMs will pass the increased costs onto the consumer. As a result, domestic auto sales are expected to witness a dip. Further, automakers based in the USA will become less competitive in China and may not be able to retain their current market share any longer.

Tesla is one of the companies that will feel the heat of higher tariffs. Chinese market accounted for approximately 17% of Tesla’s revenue in 2017. The company is already struggling to cope with the existing 25% import duties amid stiff competition from local rivals, such as BYD, NIO, and Byton, who have cheaper alternatives. American OEMs, such as Ford, GM, etc., fear that vehicles made by their subsidiaries in China and exported to the USA could end up being hit by the proposed tariffs.

Besides USA, German automakers such as BMW and Daimler will also be highly exposed since they are the largest vehicle exporters from the USA to China. Potential implications of the Sino-US trade war on companies mentioned above could lead to several job losses at US manufacturing plants. According to a report by Peterson Institute for International Economics, the trade war could result in loss of around 195,000 jobs over the next three years. Additionally, it will also impact other industry players such as auto component OEMs and suppliers, dealers, as well as local retailers.

Trade war could also hamper and limit US companies’ access to the Chinese automotive market, which is currently the largest market globally both in terms of production as well as sales. China is also the best-performing market in the world for electric vehicles (EVs) from sales, infrastructure, and government support perspective. With trade war in place, US companies could lose out to EU and other Asian counterparts on various market opportunities in China.

With trade war in place, US companies could lose out to EU and other Asian counterparts on various market opportunities in China.

Besides automakers, trade war will also have serious implications on auto parts manufacturers and suppliers as well. For example key tier-1 suppliers such as Lear, Delphi Automotive, Adient etc., rely heavily on China for their revenue. On the other side, there are many suppliers that rely on China for sourcing. China is also the largest trading partner for USA in tires. Exports in 2017 reached nearly US$2 billion, an increase of 28.2% as compared to previous year. If the proposed tariffs become reality, all these players will face business challenges on sales as well as supply-chain fronts.

For the Chinese automotive industry, the trade war will impact mainly imported cars produced in the USA and domestic cars that use components from the USA. Since most cars sold in China are manufactured locally, the impact on Chinese auto OEMs will not be as significant as felt by their US counterparts. However, China is a major exporter of auto spare parts and components to the USA. In 2017, China exported auto parts worth US$17.4 billion to the USA. Thus, the trade war will heavily impact Chinese car parts manufacturers and exporters that rely on US business. On the EV front, new tariffs will raise the prices for parts and components imported from the USA. This in turn, will dampen the adoption of EVs due to higher initial costs and impact domestic EV sales.

Trade war is likely to hinder auto investments in China up to some extent as many companies might re-think their production and supply-chain strategies and put China investments on hold. For example, Ford has kept its plan to export Focus compact to the USA from China on hold due to the ongoing rift. Trade war will therefore impact local production as automakers serving USA market might scale down production in China. This might result in layoffs at local manufacturing units. In addition, trade skirmish with the USA will also create more obstacles for Chinese companies, such as Geely and GAC Motor, looking for market expansion in the USA.

In May 2018, president Xi announced to lower tariffs on imported cars to 15% effective from July 1, and ease ownership restrictions in automotive joint-ventures. This had somewhat cooled down the ongoing tension between the two nations. At this stage, many experts believed that the current situation will be resolved between the two nations via negotiations. However, despite three rounds of negotiations, both sides have failed to reach an agreement yet.

In the recent chain of events, Trump has threatened to slap extra tariffs on additional Chinese products worth US$400 billion. He also plans to restrict Chinese investments in American technology companies and technology exports from USA to China. This has opened up another front in the ongoing battle. In response, Beijing has warned to retaliate with levies on additional list of American products.

As of now, the potential effects of a full-blown trade war on the auto industry are not clear as they are still proposals. However, if tariffs were imposed, OEMs based in the USA would feel the strongest impact as they export around 280,000 vehicles to China each year.

In addition, considering that automakers today are more globalized than ever and depend on globally-integrated supply-chain networks to optimize their bottom line, a broader impact of the trade war would impact the supply-chains of many global OEMs. The business losses suffered by them will eventually pour down to auto parts suppliers, dealers, retailers, and local auto businesses, who will all feel the heat with varying degrees. It will be interesting to see how things progress and finalize over the next few days. For now, industry stakeholders are sweating over the looming trade war between the two powerhouses.