Several decades ago, meat consumption was seen as luxury by the Chinese. Fast forward to today, meat (especially pork) has seeped into the diet of the everyday Chinese man to such an extent that today China consumes 28% of world’s total meat, including half of its pork. While this showcases immense income growth, the flip-side are the escalating environmental and health issues attributed to meat consumption. This has prompted China’s National Health and Family Planning Commission (NHFPC) to issue new guidelines which ask the Chinese people to reduce meat consumption from about 60-63kg/year to about 14-27kg/year by 2030. However, without any actionable initiatives from the government (be it in the form of investments or taxes), these recommendations are not likely make a strong dent in the surging meat consumption levels.

China has witnessed a steep growth rate in meat consumption, which soared from a mere 13kg/person in 1982 to about 63kg/person in 2016. If the current trends continue, it is predicted that by 2030, the average Chinese man will eat close to 93kg/person if suitable measures are not taken to halt this growth. Owing to these consumption levels, China is one of the largest contributors to livestock agriculture-created greenhouse gases. The predicted rise in meat intake in China (by 2030) is likely to add another 233million tonnes of greenhouse gases to the atmosphere on a yearly basis. Moreover, China’s growing love for meat has also contributed to an exponential rise in the number diabetes and obesity cases, with more than 100 million Chinese suffering from diabetes at present.

To combat these growing concerns, NHFPC issued new guidelines in 2016, urging the Chinese population to reduce their meat intake to 40-75 grams per day, which translates to about 14-27kg/year from the current rate of 63kg/year, thereby aiming to reduce the meat intake to less than half by 2030. Along with these recommendations, the government has also undertaken some measures to achieve the recommended consumption levels, however, a few of them seem rather shallow to lead to the desired change.

The government, along with few NGOs such as WildAid, are trying to create awareness regarding the new guidelines. International celebrities, such as Arnold Schwarzenegger and James Cameron, have featured in videos hailing this government action and urging Chinese people to adopt vegetarianism. Moreover, the government has introduced health education in school curriculum and is promoting “health as a habit” to push life expectancy from 75 years to 79 years. A part of this campaign is to promote healthy eating and eating less meat and more vegetables.

At the same time, however, the government has been cutting down subsidies for small-scale pig farmers as well as formulating stricter environmental regulations, in order to push backyard pig farmers to either expand and clean their operations or exit the market. However, instead of curbing the industry growth, this may only result in strengthening the operations of larger players and may also lead to market consolidation.

While the government’s latest recommendations seem necessary, albeit ambitious, given the level of current actions, they seem far from sufficient to realistically curb demand for meat in the growing economy. As per local experts, NHFPC’s guidelines have received limited coverage by the media, especially in livestock-heavy regions of Shandong, Liaoning, and Inner Mongolia. China has strong cultural traditions attached to meat-eating (such as the Yulin Dog Meat festival and the Double Ninth festival), which makes it difficult to initiate change in eating habits. Moreover, at the time when the government should initiate import restrictions and taxes to curb supply of meat (which may lead to price rise and in turn probably contract demand and consumption), the government has recently re-allowed beef imports from the USA, which is clearly a counter-productive move. 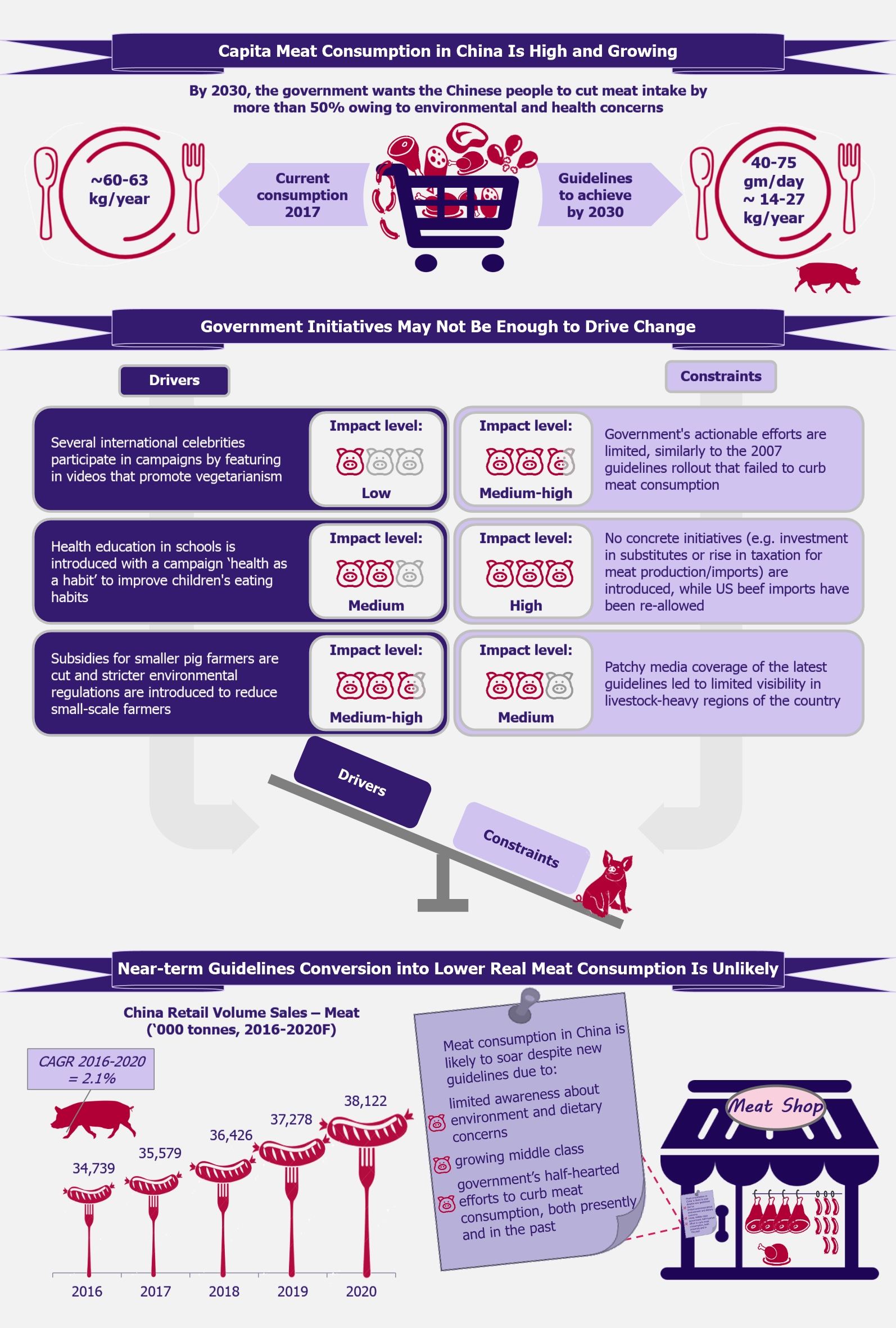 China Beefs up Meat Consumption Guidelines, but Chickens out of Action by EOS Intelligence

NHFPC’s guidelines seem to be a step in the right direction, however, in the absence of a larger and more concrete government action, these recommendations do not come across as anything more than a formality undertaken by the country’s government to please global climate campaigners. While the government announced an infusion of US$450 billion into the country’s agriculture system in September 2016, its seriousness towards these guidelines will be determined by how much of this sum will be apportioned (if any) to programs encouraging vegetarianism.

Since meat (pork/beef/poultry/sheep) farming is a large industry in China, providing key dietary ingredients for the population at large, a sudden increase in taxes or a cut down of major subsidies may not be possible. However, the government can work to fuel the desired dietary changes in a phased fashion, e.g. by starting to reduce meat imports by imposing restrictions, while simultaneously working on reducing people’s dependence on meat by promoting vegetarianism as a healthier as of life.

Although these actions may seem far-fetched, few local and large players are strategizing their future plans, mindful of these recommendations and the increased health awareness as a potential outcome of these initiatives. Since pork is the most widely used type of meat, it is likely that the intake of traditional pork dishes would be impacted the most by any actions taken by the government. Keeping this is mind, WH Group (a leading pork processing company) has already started expanding its focus to western-style products such as ham and sausages. The company expects a growing demand for such American-style foods that come with much higher margins, allowing to compensate for the potential loss of sales volume of the unprocessed, traditional cuts. The company is also diversifying into other meats, including leaner beef and lamb in their product mix, in anticipation of the growing health awareness trend.

On a final note, these guidelines alone definitely do not seem enough to stir a change in the Chinese population’s eating habits but the fact of the matter is that a change is required. It may take another decade and much greater initiatives from the government’s end to reduce the local people’s meat intake, but considering the global trend towards meat consumption reduction and the growing environmental and health concerns, it is likely that sooner or later, China will get there too. Now it remains to see if the meat farming and processing companies employ a wait-and-watch approach or proactively start investing and working towards change.