Over the past decade, China’s wine industry has evolved significantly and is at the forefront of becoming one of the most promising emerging wine markets globally. Globalization and massive socio-economic transformations among Chinese population have revolutionized consumers’ preferences and taste, which in turn created demand for high quality foreign wines in the country. Imported wines have been pouring into China, with approximately one out of every five wine bottles opened being imported. In 2016, China imported 638 million (15% y-o-y growth) liters of wine, valued at US$ 2.4 billion (16% y-o-y growth). The Chinese wine buyers are enthusiastically purchasing a variety of labels across all price ranges, making it an important market for global wine sellers. However, the burgeoning imported wine industry in China faces a few impediments. Faced with stringent import regulations, supply chain impairments, language barrier, counterfeit products, and exorbitant tariff rates, importing wine into China is not a simple process. Nevertheless, importers and producers need to overcome these challenges to establish themselves in the flourishing imported wine business in China.

China is one of the ten largest wine consumers in the world with over 2,000 brands of wine sold in the country, out of which 1,500 were imported in 2015. Consumption of imported wine is the highest in tier I cities including Beijing, Guangzhou, Shanghai, and Shenzhen, which together account for 53% of imported wine sales volume. These cities are populated with expatriates, western-educated young professionals, and consumers, who prefer imported wines. France has consistently been the key wine exporter, accounting for a share of 40% in total wine imports (by volume) to China in 2016, followed by Australia, Spain, and Chile. 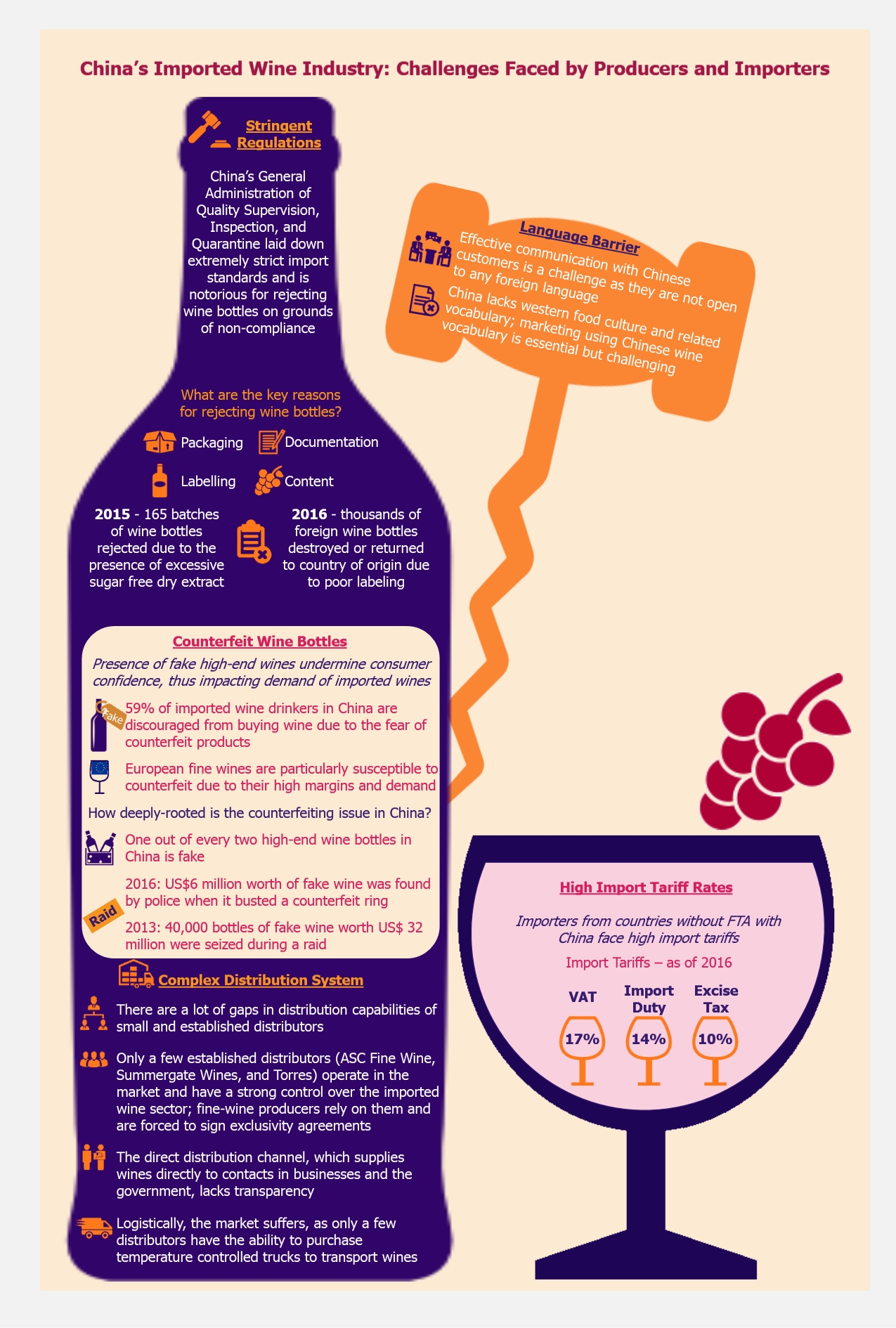 Imported wines are quickly trickling down among the wealthy Chinese citizens in urban areas, as consumption of wine is considered a status symbol, influenced by westernization. Growth is further driven by youth population and growing middle class learning about foreign liquor brands and demanding imported wines. In addition, increased consumer spending and government’s promotion of wine as a healthy substitute to the traditional alcohol ‘baijiu’ have accelerated demand for wine in the country.

Despite the growing wine demand, the imported wine industry faces several challenges including dealing with high import tariff rates and circulation of fake wine, breaking through the language and cultural barrier in China, and facing the complex distribution system along with strict import regulations.

Chinese consumers are typically interested and enthusiastic about overseas goods which explains their yearning for imported wines. The growing demand for foreign wines is driving the import business, with over 24,000 wine importers present in China, located mostly in Shanghai, Beijing, and Guangzhou. Although obstacles continue to hover above the imported wine market, certain steps have been taken to ease the hassles and this could help alleviate challenges to some extent.

What steps have been taken to overcome challenges?

The Chinese government is actively trying to curb the counterfeiting issue in the country and has introduced an anti-fraud initiative called Protected Eco-origin Product (PEOP) which is a label placed on wine bottles that acts as a guarantee of authenticity by the government. Several technologies are being adopted, including radio frequency identification (RFID) tags, Near Field Communication (NFC) chips, QR codes, etc., to combat counterfeiting. RFID tags and NFC chips offering unique serial identifiers are incorporated into wine bottle’s capsule. Using an app, users can quickly check the authenticity of wine bottles.

The government is also focusing on infrastructural development of tier II cities, which is likely to improve distribution channel across these cities, resulting in better access to imported wines.

What does the future hold for imported wine market in China?

Over 2016-2019, the Chinese wine market is forecast to reach US$ 69.3 billion, growing at a CAGR of 15.4%, with imported wines likely to occupy a significant portion of the market. In near term, imported wines are likely to filter down to tier II cities, as consumers’ knowledge and preference for imported wines is growing amidst government’s efforts to make wine more accessible across these cities.

Further, the imported wine market is likely to undergo certain structural changes. Presently, the Chinese imported wine market is very fragmented, comprising several small importers focusing and operating locally within one city. These smaller importers might realign themselves by joining forces through mergers and acquisitions, in order to take advantage of economies of scale to be able to better compete on price.

Online distribution of wines is likely to gain more popularity, as China offers highly developed e-commerce infrastructure to sell products online. Consumers are slowly opting for online channel to purchase imported wines due to the availability of wide selection, transparency of information, and ease of comparing different brands with each other through information available online. Some producers started selling their wines through marketplaces such as Tmall and JD.com, as well as through specialized alcohol platforms such as Yesmywine, Jiuxian, and Wangjiu. Further, importers use delivery apps such as Dianping and ELeMe to sell imported wines.

The foreign wine market is expected to continue thriving in China and remain an attractive proposition for importers and producers. However, the key challenges will most likely persist in the market amidst other weaknesses including slow implementation of regulations, corruption, and weak administration.

Nevertheless, wine importers and producers foresee tremendous growth opportunity in China’s imported wine industry, and they are likely to continue making efforts to navigate through all obstacles, hoping to make the struggle worthwhile in the long term.