Talk to any top executive at Gucci, Prada, Tiffany (or any luxury brand for that matter) and they will tell you the importance of Hong Kong as a market in their business. For years, Hong Kong has ranked among the top five luxury hubs and accounted for about 5-10% of the estimated US$285 billion luxury goods market. However, the recent pro-democratic protests in Hong Kong against China have left luxury brands grappling, with many undergoing store closures. With the situation seeming to worsen by the minute, luxury brands must act fast and with prudence to limit their losses, formulate strategies, and identify other regions that may help them offset loss of revenues from Hong Kong.

Hong Kong has been one of the top destinations for luxury brands with several leading brands operating multiple stores in this small area encompassing 427 square miles and housing a population of 7.5 million. Hong Kong achieved this cult status due to a large number of visitors from mainland China (as well as other Asian countries) who travel to Hong Kong to shop. This is due to Hong Kong’s tax-free policy and an assurance that the products purchased are genuine (unlike in China where stores are distrusted).

However, since mid-2019, Hong Kong’s retail market has taken a big hit. What started as a protest over an extradition law has translated into a full-fledged pro-democracy movement challenging China’s grip over Hong Kong and has brought the latter to a standstill.

Along with a large fall in visitors from China, several other countries have issued travel warnings against Hong Kong. Visitor numbers declined by 39% in August 2019 (compared with August 2018), with visitors from China falling more than 42% during the same period. In addition to fewer tourists, the local population is also avoiding malls and other public places owing to the ongoing protects. In fact, about 30 shopping malls shut down across Hong Kong in October due to violent protests. These closures have come around the peak festive time (the Golden Week holiday) and have continued to remain closed during the otherwise well-performing Thanksgiving week.

This has converted one of retail’s best performing markets into one of the poorest. Brands such as Burberry, Hermes, Prada, and Tiffany have been forced to shut down few of their stores in Hong Kong. The sales of premium goods, such as jewelry, watches, and other high-value items plunged by nearly 50% in August 2019, when compared year-on-year.

This has converted one of retail’s best performing markets into one of the poorest. Brands such as Burberry, Hermes, Prada, and Tiffany have been forced to shut down few of their stores in Hong Kong. The sales of premium goods, such as jewelry, watches, and other high-value items plunged by nearly 50% in August 2019, when compared year-on-year.

Brands are estimated to suffer a 30-60% quarterly drop in sales in Q3 2019 and considering how the protests are widening and worsening, the sales are expected to drop further in Q4. For instance, as per UK-based financial services firm, Jefferies, Burberry’s sales from Hong Kong are expected to fall by about GBP100 million (US$131.6 million) in 2019. While the brand is expected to offset half of the loss from growing sales in other regions, the remaining loss will be incurred by the luxury retailer.

Given the steep fall in sales and high real estate cost, brands are now revaluating their presence in Hong Kong. In October 2019, Prada announced its plan to shut down one of its flagship stores in Causeway Bay. The company used to pay HK$9 million (US$1.2 million) monthly rent for the 15,000 square feet store and could not justify the high costs anymore. While a few brands are shutting down stores, few others, such as Burberry, are talking to their landlords about rent reduction to cope with the gloomy sales in the short run.

The impact on luxury sales may not be just short term in Hong Kong. Several brands are re-strategizing their approach towards Hong Kong, especially with regards to the Chinese customer. Chinese customers are increasingly going for shopping trips to Japan and South Korea instead of Hong Kong.

Moreover, the Chinese government is also encouraging customers to shop in mainland China by reducing taxes and thereby narrowing the price gap between China and overseas. In 2018, the Chinese government reduced import taxes on luxury goods and followed it with a cut in value-added tax in April 2019. Post this, several brands such as Gucci and Hermes reduced their prices by about 3% in China. This might show that several brands are trying to offset their losses in Hong Kong by targeting the Chinese consumer in their home country.

Brands are also shifting their marketing investments from Hong Kong towards the mainland. Hermes and LV have been extremely bullish about the Chinese market and have opened new stores in the region. Hermes opened its 26th store in China in 2019 and has been expanding its e-commerce presence in China since launching it in 2018. 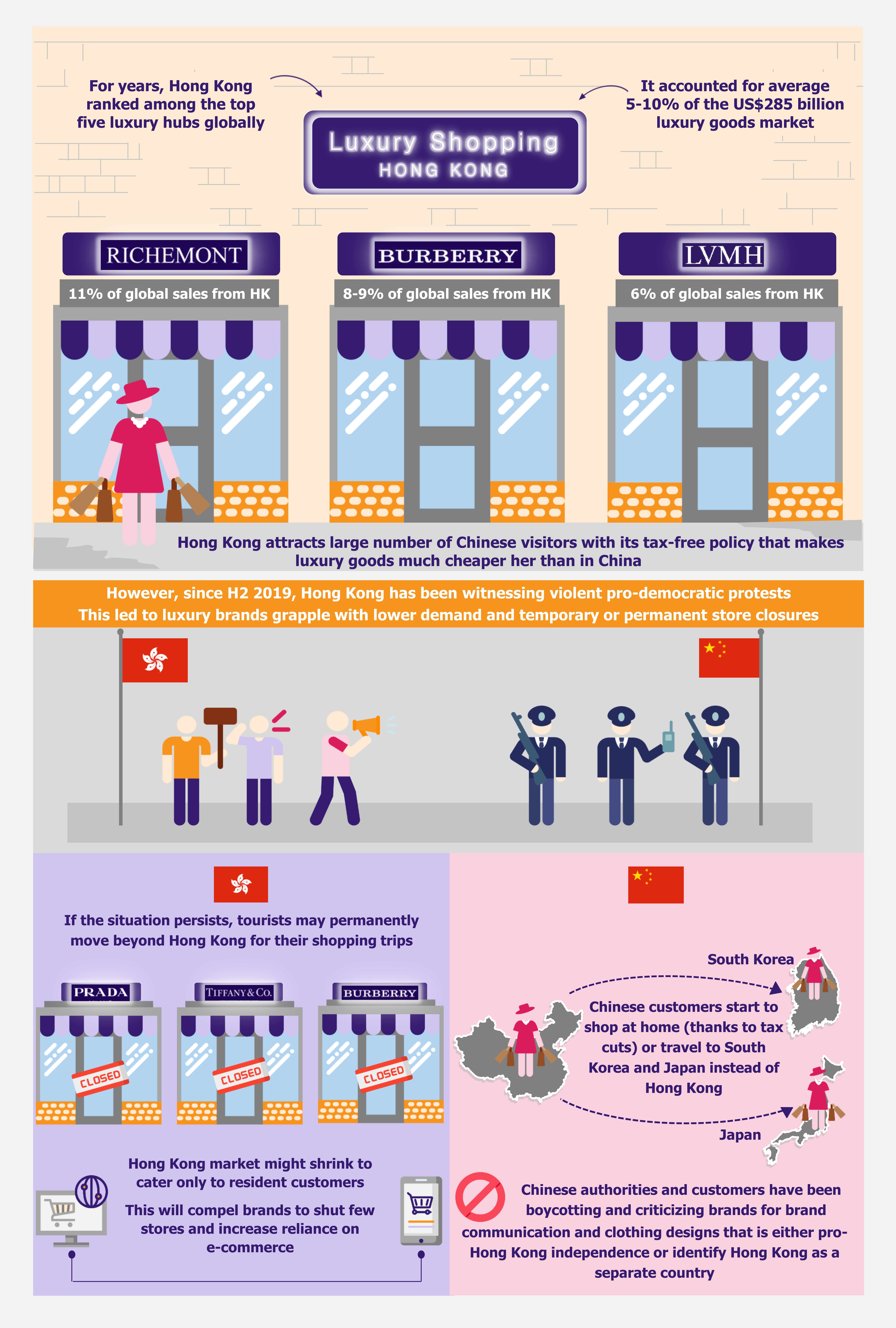 Brands are extra careful about their design and communication

In addition to focusing on reaching the Chinese customers (in their home market as well as new travel destinations), brands are also being extra cautious about not supporting Hong Kong in the conflict. China has been prompt at bringing brands to task if and when they identified Hong Kong as an independent country in any of their designs or brand communication.

Brands such as Givenchy, LVMH, Versace, and Coach have publically apologized to the Chinese nationals for their clothing designs that labeled Hong Kong as a separate country (from China). Moreover, they removed all such designs from their collections, globally, to ensure they remain in good books of the Chinese customers.

The Chinese have also been very sensitive about any support or sympathy shown to Hong Kong with regards to the conflict. For instance, Tiffany received significant backlash for one of its print ads, which showed a female model covering her right eye with her hand. The Chinese saw this as a sympathetic shout out to the Hong Kong protester who was shot in the eye in August 2019. While Tiffany clarified that the campaign was not a political statement and was conceptualized and shot much before the incident, they eventually removed the image from all digital and social media platforms.

Although not directly related to luxury brands, in October 2019, the Chinese government sanctioned the NBA for a pro-Hong Kong tweet by Daryl Morey, who is the GM of Houston Rockets team. The NBA and Tiffany cases show China’s lack of tolerance towards any pro-Hong Kong message by any brand or organization and thereby brands must ensure that they distance themselves from any pro-Hong Kong sentiment (real or perceived).

Thus it is quite possible that Hong Kong market may lose its luster for luxury goods for good, especially if the Chinese customers stray elsewhere for their shopping. In that case Hong Kong market will only remain relevant for its own residents, which may not justify more than 2-3 stores for a brand in the city.

Thus it is quite possible that Hong Kong market may lose its luster for luxury goods for good, especially if the Chinese customers stray elsewhere for their shopping. In that case Hong Kong market will only remain relevant for its own residents, which may not justify more than 2-3 stores for a brand in the city.

Most brands are currently following a wait and watch strategy, where they are not sending large amounts of their inventory to Hong Kong as has always been the case. They have temporarily shut down shops and given unpaid leaves to their employees. They will wait and gauge if the Chinese consumers do return to Hong Kong when the situation settles and decide the future course accordingly. In case the Chinese customer takes a fancy to other shopping destinations (such as Japan) or start shopping domestically, Hong Kong may lose its position as the luxury hub of Asia.

Opportunities that may arise

In case the Hong Kong conflict has any permanent impact on luxury sales in the region, brands will have to go back to the drawing board to ensure a strong position in Asia. In addition to identifying and developing new shopping hubs for the Chinese customers, brands will also have to alter their strategy and approach to retain Hong Kong’s resident customers. Hong Kong’s resident customers are also avid shoppers but they are more price sensitive in comparison with their Chinese counterparts.

Targeting solely the local residents may also widen the scope of e-commerce in luxury retail sales. Unlike most other markets, e-commerce has not been a major driver of sales in Hong Kong. This is due to the fact that a large number of shoppers are travelers and therefore prefer to make their purchases from retail stores. Moreover, the presence of multiple stores within a small area further reduced the need for e-commerce.

However, if brands plan to reduce their footprint in Hong Kong (only to cater to local residents), they may look at shutting down few stores and promoting e-commerce sales. Hong Kong residents are also more likely to purchase from online multi-brand aggregators (such as Farfetch and Net-a-Porter) that offer deals and discounts. Thus working with such aggregators to promote their brands may also be a good avenue for luxury retailers.

A growing focus and investment towards developing the e-commerce part of the business may also result in growing demand and thereby investments in the mobile payment technologies (which are used for easy payments for purchases) in Hong Kong. While this technology never really took off in Hong Kong as it did in China, this may help in providing the push that it needed.

While it is yet to be determined if the ongoing conflict will have a permanent effect on Hong Kong’s position as a prime shopping destination, it is safe to say that the situation will remain unfavorable for the next few months. While some brands such as Prada are already shutting down stores permanently and limiting their exposure in Hong Kong, others such as Burberry are a little more optimistic and want to wait before taking any such decision. This is due to the fact that Hong Kong previously faced a similar situation in 2014, when the umbrella revolution disrupted sales. However, sales bounced back shortly after and Hong Kong continued to be one of the most important luxury markets.

That being said, current protests have become much more intense than anything Hong Kong has endured before and do hold the ability to permanently contract Hong Kong’s role as a leading travel and shopping destination. This may force brands to rethink their strategy for the region with increased focus on e-commerce. This in turn could create opportunities for Hong Kong’s e-commerce and its ancillary markets.