The global smart water management market is expected to grow at a CAGR of 18.9% during 2016-2021, reaching US$20.1 billion by 2021, with USA expected to be one of the leading markets. Water utility companies across the country are focusing on installing smart water meters and replacing the old ones. Swapping the meters is a step towards deploying the infrastructure that manages water usage smartly, however, monetary, administrative, technological, and user acceptance challenges associated with adoption of this technology tend to overwhelm the public utility companies.

In the USA, just as in several other markets globally, the growth of the smart water metering industry can be attributed to the increased concern about water scarcity, reduction of water leakage, and upgrading the aging water infrastructure. Also with drought conditions becoming a common scenario in major parts of the country, the need for smart water meters to monitor both the usage and wastage of water has escalated.

Several water utilities across the USA have pursued automated metering infrastructure to monitor water usage. However, the cost of implementing smart technology is a concern for these utility companies, and acts as a major barrier to country-wide adoption. Some areas in the USA have succeeded in adopting and implementing advanced water metering solutions with the help of government funds. One such initiative was taken in 2016, when the New York Department of Environmental Protection awarded a US$68.3 million contract to ESCO’s Aclara RF Systems, a supplier of utility solutions, to provide advanced metering infrastructure solution for the city’s water service territory with 875,000 meters serving nearly eight million customers.

While such initiatives are helpful, the extent and availability of the government funds is limited, and it seems that support in the form of public funds to deploy smart water meters is crucial in driving the change on a nationwide scale. Indeed, the last period, in which US utilities saw an upsurge in spending on smart metering infrastructure, was around 2010, when US smart water meter investment reached US$395 million, coinciding with stimulus funding programs from public agencies, such as Department of Energy and Environmental Protection Agency.

As such funding flow from public programs slows down, so does the infrastructure investment, clearly indicating the inability by the utility companies to carry out such major upgradations by themselves. And they are not to be blamed, as there is a major resistance from their customers (especially residential users) to accept higher prices for such basic necessities as water, in the event the utility companies would want to generate funds through such a route. Many customers, in general, throw roadblocks at utilities’ smart metering roll out plans. Frequently, they simply do not want such meters, following reports of water bills doubling after smart meters installation for some residential users. Moreover, many residents raise questions with regards to health, privacy, overbilling issues, with resistance resulting in the rise of organizations such as StopSmartMeters.org, an advocacy group originating from California. With such a sentiment in some communities, it is virtually impossible to convince the users to accept higher prices to generate funds needed by utility companies for smart infrastructure investments.

The needs for funding are vast and frequently the availability of funds at public utilities does not match the requirement to roll out and integrate an extensive network of smart meters with the existing infrastructure. Such roll outs can only be done in phases, to accommodate for both availability of funds and network integration. For instance, Memphis Light, Gas and Water (MLGW), a three service municipal public utility company, first started rolling out the smart meter program in 2013, when about 60,000 customers in Memphis area had the new meters installed. The initiative moved to the next phase only in 2016, when Honeywell, a technology conglomerate, was selected to deploy smart meters over next five years for MLGW. The US$200 million contract included deploying one million meters (across three utilities) in MLGW’s service territory and providing the customers with access to their consumption data in order for them to manage the utilities usage in real time rather than seeing it after receiving the bill.

The MLGW service area is not fully covered with smart meters yet, as many layers of infrastructure must be developed simultaneously or ahead of time of the roll out. The smart grid project is still under way at MLGW, and includes development of fiber optic communications system required before even a single smart meter is operational in a particular area. MLGW received public funding for this section of the project, however it is only partially covered by a federal grant. The rest of the funds to develop these complex systems that require broader IT environment, including fiber optic or wireless connections, repeaters and gateways, analytical software, hydraulic modelling and network monitoring, must be typically generated by the utility companies. 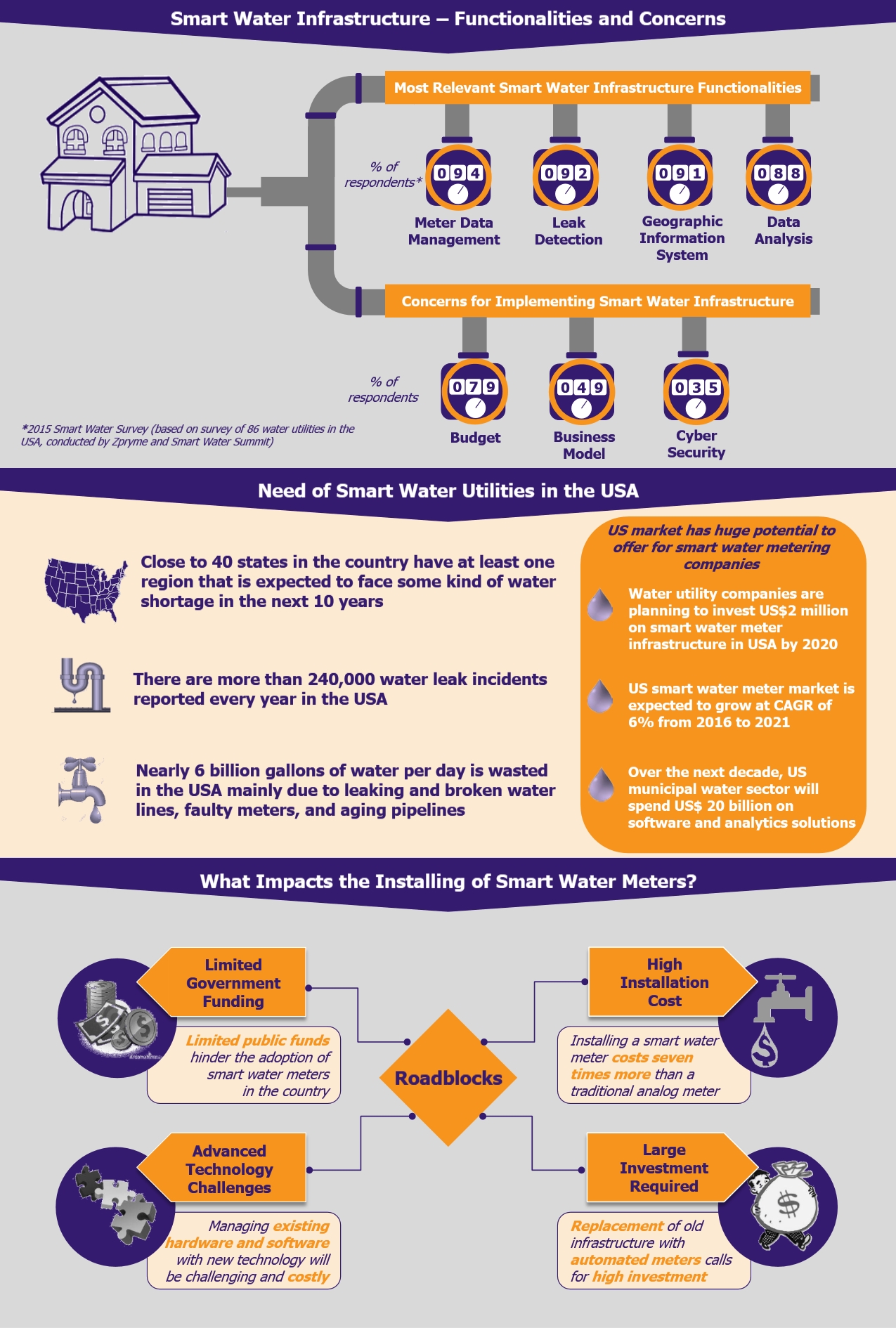 Many US water utility companies are switching from traditional mechanical meters for water reading to smart meters that capture real-time or near-real-time data about water usage and leakage. However, the transition has unquestionably been slower than desired, mainly because of the high cost of installing smart meters and related infrastructure, a major issue that continues to delay the deployment of smart meters across the country. The cost difference is indeed considerable – according to DC Water, a water services company based in Washington, DC, it costs an average of US$180 to install a smart meter in the capital as against a regular analog meter that costs around US$25. Replacing the old water lines with the new automated metering infrastructure also calls for a huge investment. As per a survey conducted in 2016 by West Monroe Partners, a US-based consulting firm, only 20% of the water utilities in the country adopted the automated water meters citing cost as a barrier to implementing smart meter technology.

Implementation of automated water meters is a complex task not only from the point of view of finances required but also with regards to the technological advancement, which is an ongoing process. Current generation of smart water devices have in-built capabilities that easily track water usage and detect leaks, but the technology continues to develop. As technological advancements intensify, it will not take long till the existing so-called smart meters will not support the features required in the future, making the present-day water meters obsolete. This is a considerable challenge for water companies when engaging in costly infrastructure projects. No utility provider will spend huge amount of money on smart meter today, only to replace them in a couple of years.

The limited government funding further complicates the situation for public utilities, putting a break on the smart meters systems truly taking off. With no clear funding policies, the road ahead is bumpy to achieve the goal of installing automated water metering systems throughout the country. US administration’s limited commitment to support installations, makes it difficult to anticipate by when the US water systems will be benefiting from smart technology. This uncertainty about the political will, clear resistance by some users, paired with high costs and the installations being outpaced by changing technology, make it hard to arrive with reasonable expectations of the timeframe in which consistent and widespread installations will be completed across the country. Till then, despite the fact that smart water metering can help reduce water loss and generate significant savings, a system that is only partially run with smart meters will not offer savings and smart management to its full potential.