The development of fossil fuels in the GCC has led to a rapid economic growth of the region. A couple of the GCC countries boast some of the highest GDP per capita globally, with the good economic performance attributed primarily to the hydrocarbon sector growth. Saudi Arabia, the UAE, and Kuwait are the second, sixth, and ninth largest producers of oil in the world, respectively in 2015, reflecting their position as hydrocarbon exporters and producers. However, with rising domestic demand for energy and the need for a sustainable future energy supply, GCC has been making efforts to introduce renewable energy sources with a view to balance economic needs with environmental factors.

The Gulf Cooperation Council (GCC) comprises countries that are among the largest hydrocarbon producers in the world, with GCC collectively holding around one third of crude oil reserves and almost one fifth of global gas reserves. While oil and gas exports have underpinned an extraordinary economic growth of the GCC over the past several decades, the increasing domestic demand for energy has made it difficult for these countries to maintain their export levels. For instance, in 2014, Saudi Arabia, one of the largest oil producers globally, was the seventh largest consumer of oil in the world. In the same year, its domestic energy consumption stood at 28% of production against 17% in 2000, reflecting a rising domestic demand.

Domestic demand for energy is increasing in GCC

Various reasons including industrialization, water desalination, and increase in population size, have led to this increase in domestic demand for energy in GCC. Industrial sector (comprising mostly oil refining, petrochemical, water, and fertilizer industries) accounts for nearly half of the total demand in the region.

The growth of the residential and commercial sector has also contributed to the rising energy demand, and currently almost half of the total electricity produced in the region is used by the residential sector. Moreover, electricity consumption by recent housing and commercial projects has grown at an average rate of 6% to 7% per year between 2003 and 2013, faster than anywhere else in the world in this time period.

Furthermore, rapid economic development in the region has led to rising water demand, leading countries to generate fresh water through seawater desalination. Desalination fulfills a large share of GCC’s water demand (e.g. around 27% of the total water demand in Oman and 87% in Qatar in 2015). Since desalination is an energy-intensive process, it has also put pressure on the consumption of fossil fuels.

These factors have forced GCC to focus on diversifying its energy mix to meet the domestic demand while still sustaining the countries’ economic growth. A diverse energy resources portfolio is needed to allow GCC to make the domestic energy production available for export. In addition, it would also reduce carbon-dioxide emissions to create a more environmentally sustainable future. Countries in the GCC region are thus focusing on developing the renewable energy sector, particularly solar energy.

The region is turning to alternative sources of energy

Several GCC countries have embarked on a path of setting more aggressing targets for sustainable energy production from sources other than traditional fossil fuels.

For instance, UAE plans to invest US$ 163 billion in the next 30 years in renewable energy sector. Moreover, it aims to increase the contribution of clean energy in total energy mix from 25% at present to 50% by 2050. It also plans to generate 44% of its power supply from renewable sources (e.g. solar), 12% from clean fossil, and 6% from nuclear energy.

Further, as Saudi Arabia’s renewable energy represents merely 1% of the total energy produced, the kingdom targets to increase the renewable energy share to 4%, an equivalent to around 3.45GW.

Other countries are also developing plans, and these include the renewable energy program in Kuwait that aims to generate 2GW energy from renewable sources, thus contributing 15% of the total energy produced by 2030. The country also commissioned its first solar power project of 10MW with an investment of US$ 99 million in 2016 and plans to generate around 20% electricity from alternative sources by 2020. 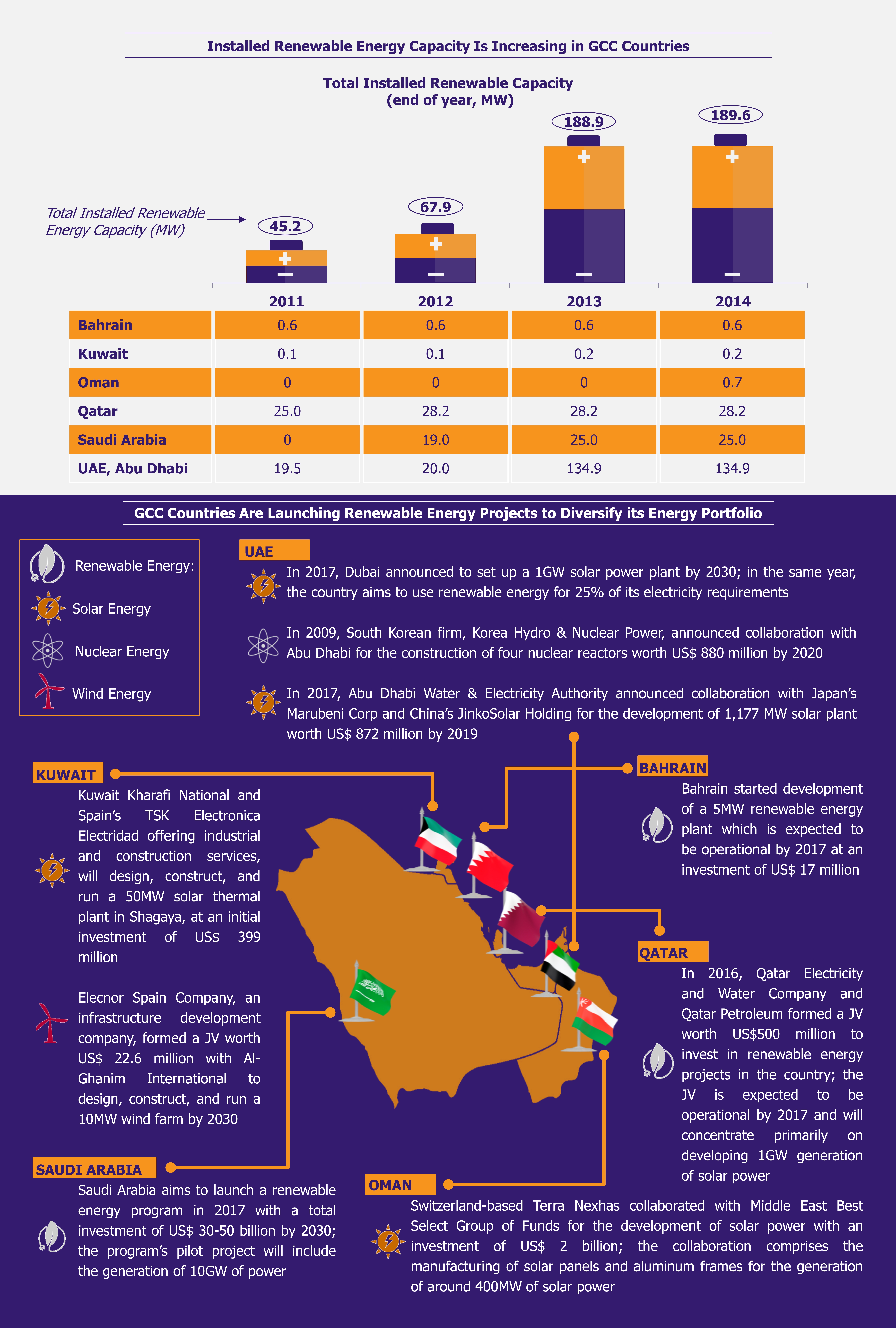 While GCC is putting in efforts to become an energy efficient region and reduce its revenue dependency on exports, the pace of alternative energy sources development has been rather low. Lack of clarity in roles and responsibilities of policy makers as well as uncertain policies and regulations around energy planning are contributing to the slow growth of renewable energy generation.

Lack of clarity in roles and responsibilities of policy makers as well as uncertain policies and regulations around energy planning are contributing to the slow growth of renewable energy generation.

In most countries, no authority has been assigned at the governmental level to handle the affairs of the renewable energy sector. There is no doubt that more dedicated efforts towards the implementation of energy development projects would surely help speed up the process of the sector’s development.

The governments of the Gulf countries should focus on establishing renewable energy corporate framework and assign a body to handle the development and implementation of policies and projects in this sector. Only few countries have assigned units within governmental structures to take the responsibility of overseeing the renewable energy production capacity growth.

The governments of the Gulf countries should focus on establishing renewable energy corporate framework and assign a body to handle the development and implementation of policies and projects in this sector.

For example, in 2010, UAE, set up a dedicated department called Directorate of Energy and Climate Change (DECC) within the Ministry of Foreign Affairs (MOFA), to lead the development of renewable energy in the country, supporting the national climate change strategy. DECC was also established to coordinate with stakeholders for the promotion of green energy in the UAE. It engaged with International Renewable Energy Agency (IRENA), an intergovernmental organization assisting its member countries to include green energy in their energy portfolio. IRENA acts as a center of excellence offering expertise and financial support to its members.

All GCC countries are members of IRENA which aids them in scaling up green energy in their respective countries. For instance, in 2014, it conducted Renewables Readiness Assessment (RRA) with the Government of Oman with a view to create a renewable energy roadmap comprising policies, regulations, and the infrastructure required for the country to meet its energy goals. The organization, thus, helps in the decision making as well as the implementation of strategies regarding renewable energy in GCC countries.

GCC should also focus on nurturing the development of R&D institutes which could offer expertise to policy makers in energy portfolio diversification. Such institutions could also offer workforce training to enable faster project deployment along the value chain.

GCC should also focus on nurturing the development of R&D institutes which could offer expertise to policy makers in energy portfolio diversification.

International collaboration with private and public companies in the GCC to set up renewable energy facilities could also support the development of the renewable energy sector in the region. Furthermore, incentives should be offered to these companies to encourage the establishment of green projects and facilities.

Endowed with hydrocarbon resources fueling economic development, GCC now has the potential to fuel its economic growth in a more sustainable manner, taking advantage of other resources at hand (e.g. by utilizing abundant sun available in the region throughout large part of the year). However, a greater and more structured regulatory support and more focused implementation is required to pave the way for the renewable energy sector development in the GCC.