Augmented Reality (AR) delivers digital components atop an existing reality in order to make it more meaningful and interactive, while Virtual Reality (VR) enables immersive simulation of real-life setting or environment. AR and VR have wide-reaching applications in healthcare, from treatment and therapy to training and education. Though AR and VR have promising applications in healthcare, are these technologies prime for widespread adoption? This will largely depend on how effective these technologies are in relation to its cost of investment. Some of the AR and VR solutions standout to bring in significant cost savings. 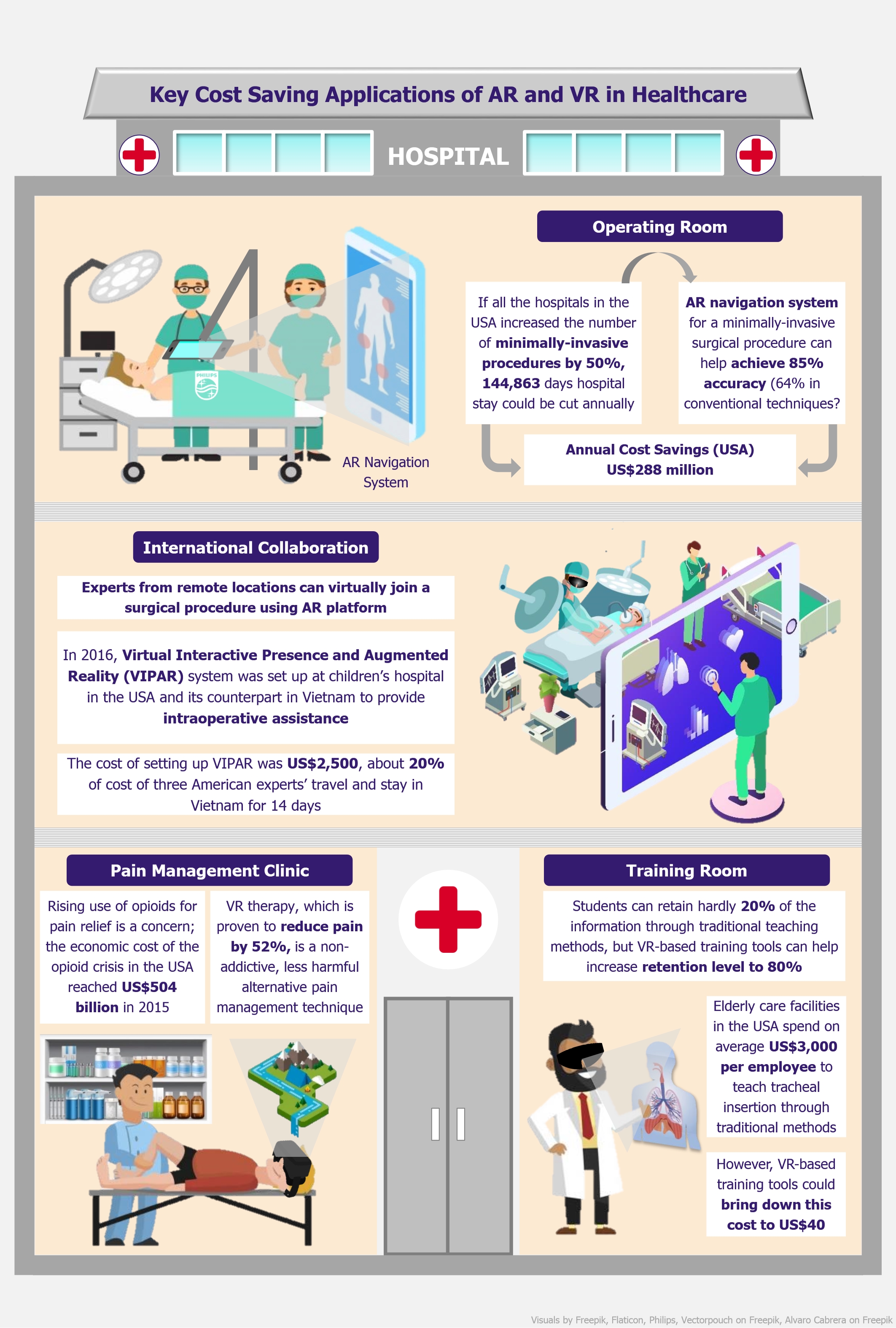 In 2015, based on analysis of 80,000 surgical cases (retrieved from 2010 National Inpatient Sample, USA), Johns Hopkins University School of Medicine estimated that if all US hospitals increased the number of minimally-invasive procedures by 50%, nearly 3,600 complications could be avoided and hospital stays could be cut by 144,863 patient days, resulting in total cost savings of about US$288 million annually. Despite such evident advantages, minimally-invasive surgeries are not as common as traditional approaches, because they require high precision and accuracy – and that is exactly where AR can be useful. For instance, Philips, a Dutch medical technology company, developed a real-time imaging solution which allows projection of high-resolution 3D image of the patient’s spine and a fully-automatic AR navigation system which guides the surgeon to plan the optimal device path, and subsequently place pedicle screws. The first pre-clinical study on the technology showed that the use of AR technology resulted in 85% accuracy as compared to 64% accuracy in case of conventional techniques. Using AR technology, doctors can perform minimally-invasive surgical procedures with high level of precision and efficiency, while minimizing mistakes and errors, thus reducing the preventable costs.

Tele-mentoring is another practical application of AR which can bring considerable cost savings. In some complex cases, the locally available healthcare professionals are not skilled and experienced enough to carry out the procedure and experts from different cities or countries need to be called in to perform the treatment, and this involves lot of time and costs. There are certain AR platforms that allow experts from remote locations to virtually join a surgical procedure. Using Google Glass or tablet, a real-time projection of the remotely located expert’s hands could be overlaid onto the local surgeon’s field of sight during the procedure. In 2016, as a part of ongoing neurosurgical collaboration between Children’s of Alabama Hospital (USA) and Children’s Hospital in Ho Chi Minh City (Vietnam), Virtual Interactive Presence and Augmented Reality (VIPAR) telecommunication system was implemented at both hospitals to provide intraoperative assistance. The cost of setting up the hardware, software, and internet connection (for one year) was around US$2,500. This is far less in comparison to the cost of the American experts’ travel and stay in Vietnam. For instance, the expense of sending a team of three doctors from the USA to Vietnam for 14 days could total to around US$12,500.

VR therapy is proving to be effective in providing relief from pain. Several studies have suggested that parts of the brain linked to pain-somatosensory cortex and the insula are less active when patients are distracted by an immersive experience created by VR technology, thereby reducing the pain. A clinical study by AppliedVR, a US-based company building VR platform for use in healthcare, suggested that VR therapy was effective in reducing pain by 52%. This can prove to be a breakthrough in the field of pain management, and possibly reduce the opioid prescription. High-income countries such as the USA, Canada, UK, and Australia are struggling with the opioid crisis. Although, the cost of opioids is relatively low, the resulting addiction problems and drug overdose deaths lead to high societal and economic costs. For instance, the economic cost of the opioid crisis in the USA in 2015 was estimated at US$504 billion; 85% of these costs were associated with fatalities resulting from overdose. This was equivalent to 2.8% of GDP of the country that year. For countries such as the USA, where opioid epidemic is declared as a public health emergency, there is a high demand for non-addictive, less harmful alternative pain therapy such as VR.

VR-based medical training through immersive visualizations is proven to be more effective than conventional teaching methods. In 2015, Miami Children’s Health System claimed that the medical professionals could retain as much as 80% of the information from a VR training session, compared to 20% retention level with traditional teaching methods. VR can also help to significantly reduce medical training costs. For instance, elderly care facilities in the USA spend on average US$3,000 per employee to teach tracheal insertion through traditional methods; however, Next Galaxy, a US-based company, developed a VR software that will bring down the cost of training per employee to US$40. This VR software uses leap motion force feedback technology which enables the medical professionals to sense when the procedure is going wrong. As a result, this tool can create a realistic scenario, and medical professionals can have nearly hands-on experience of performing the procedure in a safe and controlled training environment, without risking the life of a patient, thus saving costs incurred in potential litigations.

AR and VR are among the next-generation technologies with the potential to transform healthcare. There is a consensus amongst analysts that a healthy growth of the global AR and VR in healthcare market can be expected over the coming years. For instance, a research company MarketsandMarkets estimated the market size at US$769.2 million in 2017, with forecast growth at a CAGR of 36.6% to reach US$4,997.9 million by 2023. Similarly, another research firm, Key Market Insights, expects the market to reach to US$5.6 billion by 2022. Several clinical studies indicate that innovative techniques powered by AR and VR are more efficient and effective over conventional methods, thus spurring the interest of private companies and in turn, expanding the market space.

Though AR and VR technologies offer significant opportunities for cost savings, the cost of investment in such new and emerging technologies is also an essential point of consideration.

There is high uptake of VR applications that are compatible with consumer-grade VR headsets such as Google Cardboard, Oculus Rift, HTC Vive, etc. These devices have already reached mainstream use. Moreover, as the technology matures, the competition is increasing, further driving down the price of the devices; for instance, in 2017, Oculus Rift (headset with motion sensor controller) was priced at US$399, half of its launch price in 2016. Increasing use of more affordable consumer-grade VR devices for healthcare applications will further bring down the cost of investment, thereby driving adoption of the VR technology in the sector.

While AR headsets and smart glasses such as Microsoft HoloLens and Google Glass are still in trial version, some of the AR applications can be experienced on any smartphone/tablet without the need of headset or controllers, thus making it more accessible and affordable; for instance, EyeDecide, developed by OrcaMD, is an AR-based mobile app that simulates patient’s vision to demonstrate their actual medical condition. Such applications, which are priced as low as US$1.99 to US$4.99, can be widely used to enhance patient experience.