Ethiopia’s telecom sector has been considered as the last frontier for telecom players, since the country is one of just a few to still have a state-run telecom industry. However, this is due to change, as the Ethiopian government has finally opened up the sector to private investment. Privatization of the telecom sector has been on the prime minister Abiy Ahmed’s agenda since he first took office in 2018, however, it was initially a slow process, mostly due to bureaucracy, ongoing military conflicts, and COVID-19 outburst. Apart from that, the privatization terms have not been very attractive for private players, making the whole process complicated.

With a population of about 116 million and only about 45 million telecom subscribers, Ethiopia has been one of the most eyed markets by telecom players globally. The telecom sector has immense potential as Ethiopia has one of the lowest mobile penetration rates in Africa.

To put this in perspective, Ethiopia has a mobile connection rate of only 38.5%, while Sub-Saharan Africa has a mobile connection rate of 77%. Moreover, 20% of Ethiopian users have access to the Internet and only about 6% currently use social media, which is much lower than that in other African countries. That being said, about 69% of the country’s population is below the age of 29, making it a strong potential market for the use of mobile Internet and social media in the future.

This makes the market extremely attractive for international players, who have for long been kept at bay by the Ethiopian government. Thus, when the government expressed plans to open up the sector, several leading telecom players such as MTN, Orange, Etisalat, Axian, Saudi Telecom Company, Telkom, Vodafone, and Safaricom showed interest in penetrating this untapped and underserved market.

Currently, state-owned Ethio Telecom, is the only player in the market. Lack of competition has resulted in subpar service levels, poor network infrastructure, and limited service offerings. For instance, mobile money services, which are extremely popular and common across Africa have only been introduced in Ethiopia in May 2021.

Moreover, as per UN International Telecommunication Union’s 2017 ICT Development Index (IDI), Ethiopia’s telecom service ranked 170 out of 176 countries. To correct this, in June 2019, the government introduced a legislation to allow privatization and infuse some competition and foreign investment into the sector. The privatization process is expected to rack up the country’s foreign exchange reserves, in addition to facilitating payment of state debt. It also aims to improve the overall telecom service levels and help create employment in the sector.

As a part of its privatization drive, the government has proposed offering two new telecom licenses to international players as well as partially privatizing Ethio Telecom by selling a 40% stake in the company. The sale of the two new licenses will be managed by the International Finance Corporation, which is the private sector arm of the World Bank. 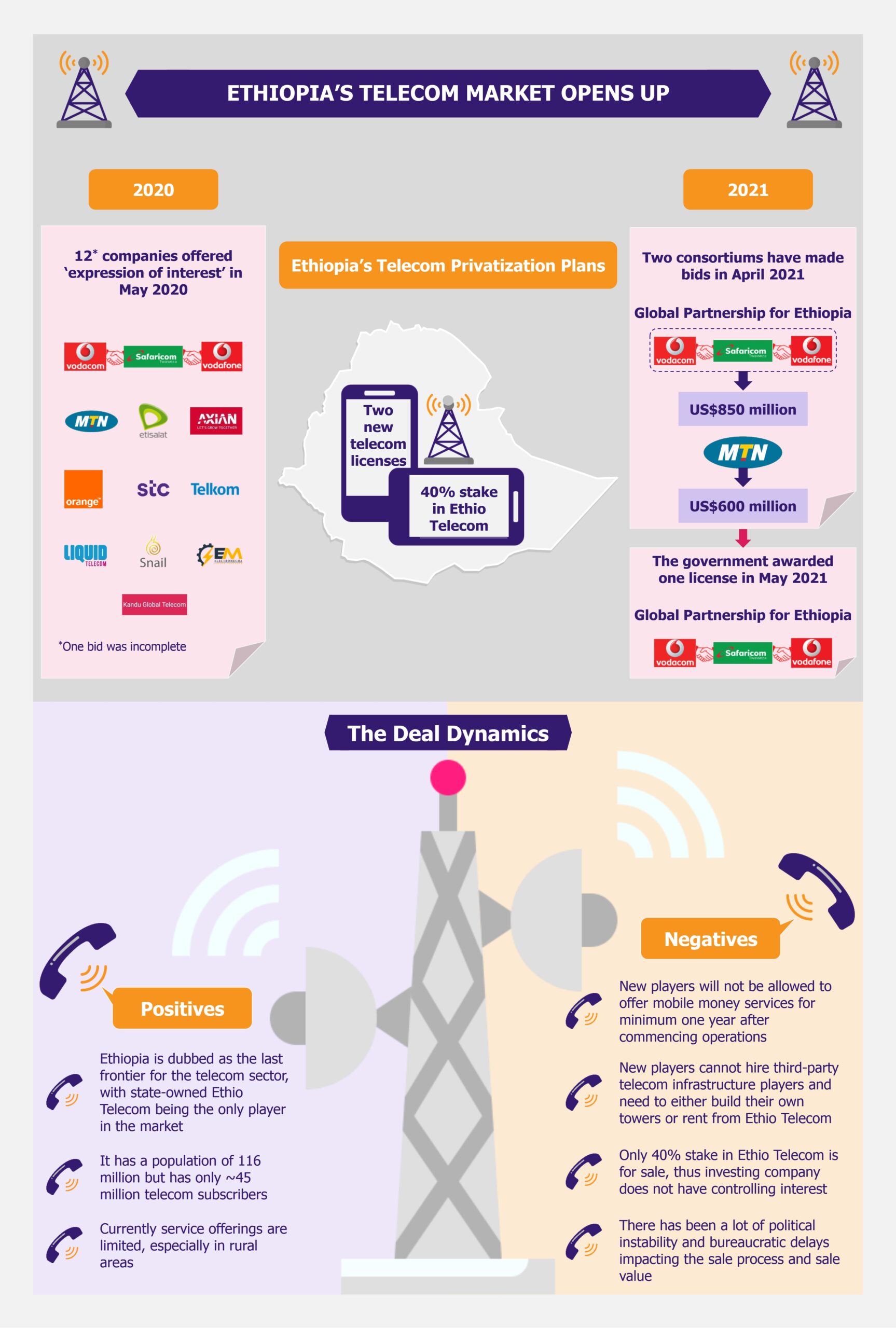 While this garnered interest from several international telecom players, with 12 bidders offering ‘expression of interest’ in May 2020, the process has not been very smooth, owing to bureaucracy, ongoing military conflicts in the north of the country, and the proposal of an uneven playing field for international players versus Ethio Telecom. This last challenge appears to be a major obstacle to a smooth privatization process.

As per the government’s initial rulings, the new international players were not to be allowed to provide financial mobile services to their customers, while this service was only to be reserved for Ethio Telecom. Mobile money is a big part of the telecom industry, especially in Africa, where it is extremely popular and profitable as banking infrastructure is weak. This made the deal much less attractive for foreign bidders as mobile money constitutes a huge revenue stream for telecom players in African markets.

However, post the bidding process in May 2021, the government has tweaked the ruling to allow foreign players to offer mobile money services in Africa after completing a minimum of one year of operations in the country. However, since this ruling came in after the bidding process was completed, the government missed out on several bids as well as witnessed lower bids, since companies were under the impression that they will not be allowed to offer mobile money services. As per government estimates, they lost about US$500 million on telecom licenses because of initial ban on mobile money.

Another deterrent to the entire process has been the government’s refusal to allow foreign telecom tower companies to enter the Ethiopian market. The licensed telecom companies would either have to lease the towers from Ethio Telecom or build them themselves, but they would not be allowed to get third party telecom infrastructure players to build new infrastructure for them, as is the norm in other African countries. This greatly handicaps the telecom players who will have to completely depend on the state player to provide infrastructure, who in turn may charge high interconnection charges that may further create an uneven playing field.

These two regulations are expected to insulate Ethio Telecom from facing fierce competition from the potential new players, and in turn may result in incumbency and poor service levels to continue. Moreover, even with regards to Ethio Telecom, the government only plans to sell 40% stake to a private player (while 5% will be sold to public), thereby still maintaining the controlling stake. With minority stake, private players may not be able to work according to their will and make transformative changes to the company. It is considered a way to just get fresh capital infused into the company without the government losing real control of it.

In addition to these limitations, the overall process of privatization has faced delays and complications. The bidding process has been delayed several times over the past year owing to regulatory complexities, the COVID crisis, and ongoing military conflict in the northern region. The process, which was supposed to be completed in 2020 was completed in May 2021, with the final bidding process taking place in April 2021 and the government awarding the bids in May 2021.

During the bidding process, the government received only two technical bids out of the initial 12 companies that had shown interest. These were from MTN and a consortium called ‘Global Partnership for Ethiopia’ comprising Vodafone, Safaricom, and Vodacom. While the Vodafone consortium partnered with CDC Group, a UK-based sovereign wealth fund, and Japanese conglomerate, Sumitomo Corporation, for financing, MTN group teamed up with Silk Road Fund, China’s state-owned investment fund to finance their expansion plans into Ethiopia. The other companies that had initially shown interest backed out of the process. These include Etisalat, Axian, Orange, Saudi Telecom Company, Telkom SA, Liquid Telecom, Snail Mobile, Kandu Global Communications, and Electromecha International Projects.

In late May 2021, the government awarded one of the licenses to the ‘Global Partnership for Ethiopia’ (Vodafone, Safaricom, and Vodacom) consortium for a bid of US$850 million. While it had two licenses to give out, it chose not to award the other license to MTN, who had made a bid of US$600 million. As per government officials, the latter bid was much lower than the expected price, which was anticipated to be close to a billion by the government.

Moreover, the government seems to have withheld one of the licenses as currently the interest in the deal has been low, considering that it only received two bids for two licenses. Given that they have somewhat altered and relaxed the guidelines on mobile money (from not being allowed to be allowed after minimum one year of operations), there may be some renewed interest from other players in the market. That being said, the restriction on construction of telecom infrastructure is expected to stay as is.

In the meanwhile, Orange, instead of bidding for the new licenses, has shown interest in purchasing the 40% stake in Ethio Telecom, which will give the company access to mobile money services right away. However, no formal statement or bid has been made by either of the parties yet. If the deal goes through, it will give Orange a definite advantage over its international competitors, who would have to wait for minimum one year to launch mobile money services in the market. In May 2021, Ethio Telecom launched its first mobile money service, called Telebirr, and managed to get 1 million subscribers for the service within a two-week span. This brings forth the potential mobile money holds in a market such as Ethiopia.

While several international telecom companies had initially shown interest in entering the coveted Ethiopian market, most of them have fizzled out over the course of the previous year, with the government only receiving two bids. Moreover, the bid amounts have been much lower than what the government initially anticipated and the government chose to accept only one bid and reject the other. Thus the privatization process can be deemed as only being partially successful. Furthermore, the opportunity cost of restricting mobile money services has been about US$500 million for the government, which is more than 50% of the amount they have received from the one successful auction.

This has occurred because the government has been focusing on sheltering Ethio Telecom from stiff competition by adding the restrictions on mobile money and telecom infrastructure. While this may help Ethio Telecom in the short run, it is detrimental for the overall sector and the privatization efforts.

Restrictions on using third-party infrastructure partners, may also result in a slowdown in rolling out of additional infrastructure, which is much needed especially in rural regions of Ethiopia. Other issues such as ongoing political instability in the northern region have further cast doubt in the minds of investors and foreign players regarding the government’s stability and in turn has impacted the number of bids and bid value.

It is expected that the government will restart the bidding process for the remaining one license soon. However, the success of it depends on the government’s flexibility towards mobile money services. While it has already eased its stance a little, there is still a lot of ambiguity regarding the exact timelines and conditions for the approval. The government must shed clarity on this before re-initiating the bidding process. MTN has also mentioned that it may bid again if mobile money services are included in the bid.

However, with Vodafone-Safaricom-Vodacom consortium already winning one bid and expecting to start services in Ethiopia as early as next year, the company definitely has an edge over its other competitors. Considering that the first bid took more than a year and faced several bureaucratic delays, it is safe to say that the second bid will not happen any time soon, especially since this time it is expected that the government will give a serious thought to the inclusions/exclusions of the deal and the value that mobile money brings to the table for both the government and the bidding company.