An anticipated slowdown in the global smartphone sales forecast for 2016 due to lack of new first-time buyers in large markets such as the USA, China, and Europe, has been alarming for large players who have turned their focus to other emerging markets. To fit the expectations and financial capabilities of price-sensitive consumers in these markets, companies are lining up to sell refurbished smartphones as a strategic move to increase sales volume. However, competition – primarily from new smartphones – in these markets is still fierce, due to some smartphone makers (such as Chinese mobile phone manufacturer Tecno Mobile) reaching consumers with more economic devices. Are second-hand smartphones capable of outshining new devices in emerging markets?

The global smartphone market has been witnessing a slowdown in sales during 2016 in comparison to previous years, partially because some markets, such as the USA, China, and Europe have become saturated (in large part with mid-range and high-end models, such as Apple’s iPhone and Samsung’s Galaxy). Therefore, to avoid a decrease in sales and a subsequent loss in profits, smartphone makers are readjusting their strategies to focus on marketing economic second-hand sets in developing countries. 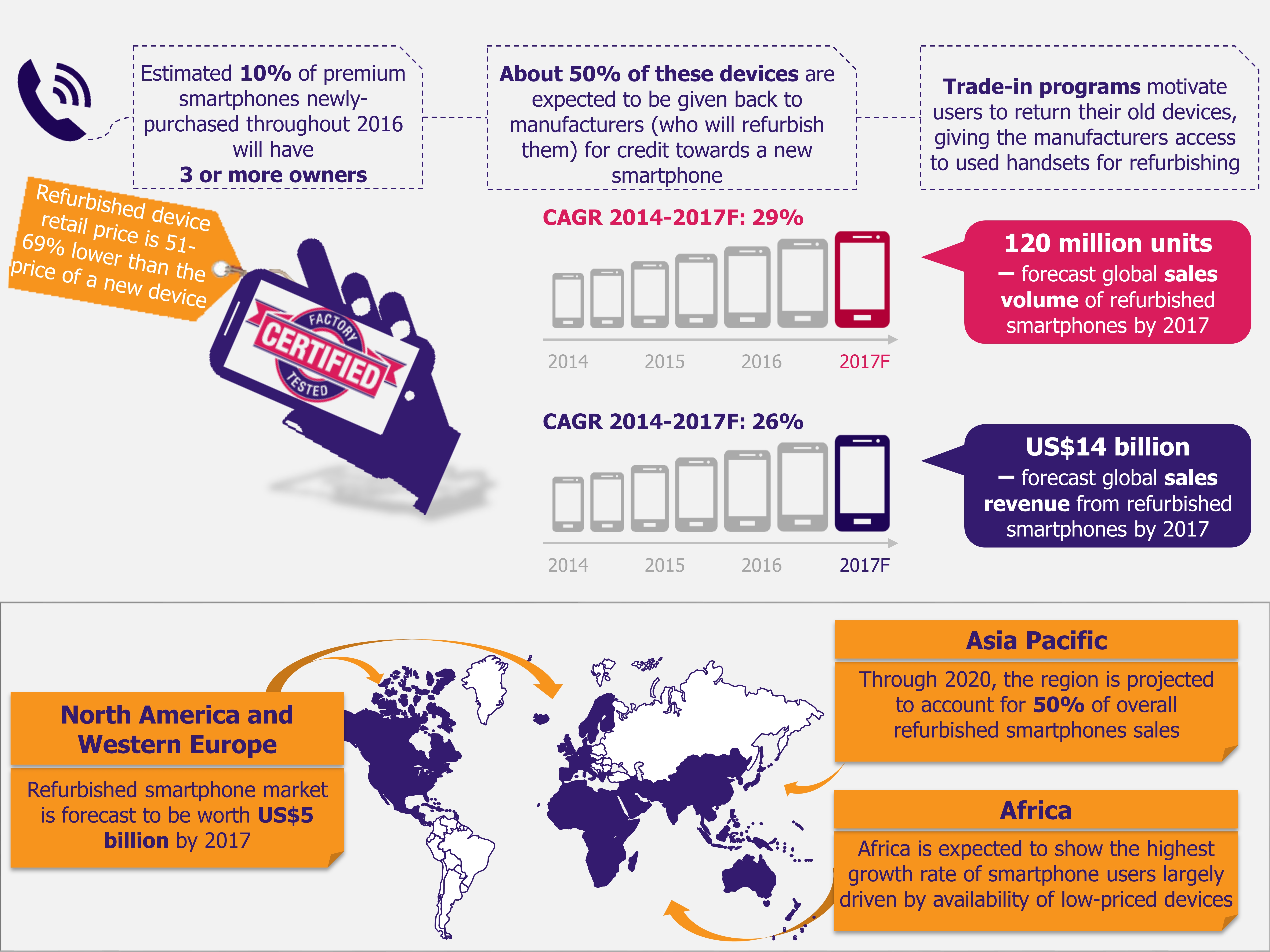 According to a 2016 Deloitte report, refurbished smartphones global sales volume is expected to increase from 56 million units sold in 2014 to 120 million in 2017, growing at a CAGR of 29%. Large part of this growth is likely to occur in emerging markets, such as India, South Africa, or Nigeria, which is a sound reason for large players to venture into these geographies.

Most smartphone buyers in these markets are highly price-sensitive and frequently precede their phone purchasing decisions with intensive online research to get a good understanding of options that are available to them based on their financial capabilities. These consumers are likely to prioritize price over features and appearance of a smartphone. Therefore, refurbished devices from well-known brands, such as Samsung or Apple, need to offer satisfying functionalities yet be available at affordable price in order to be attractive for buyers in these emerging economies. 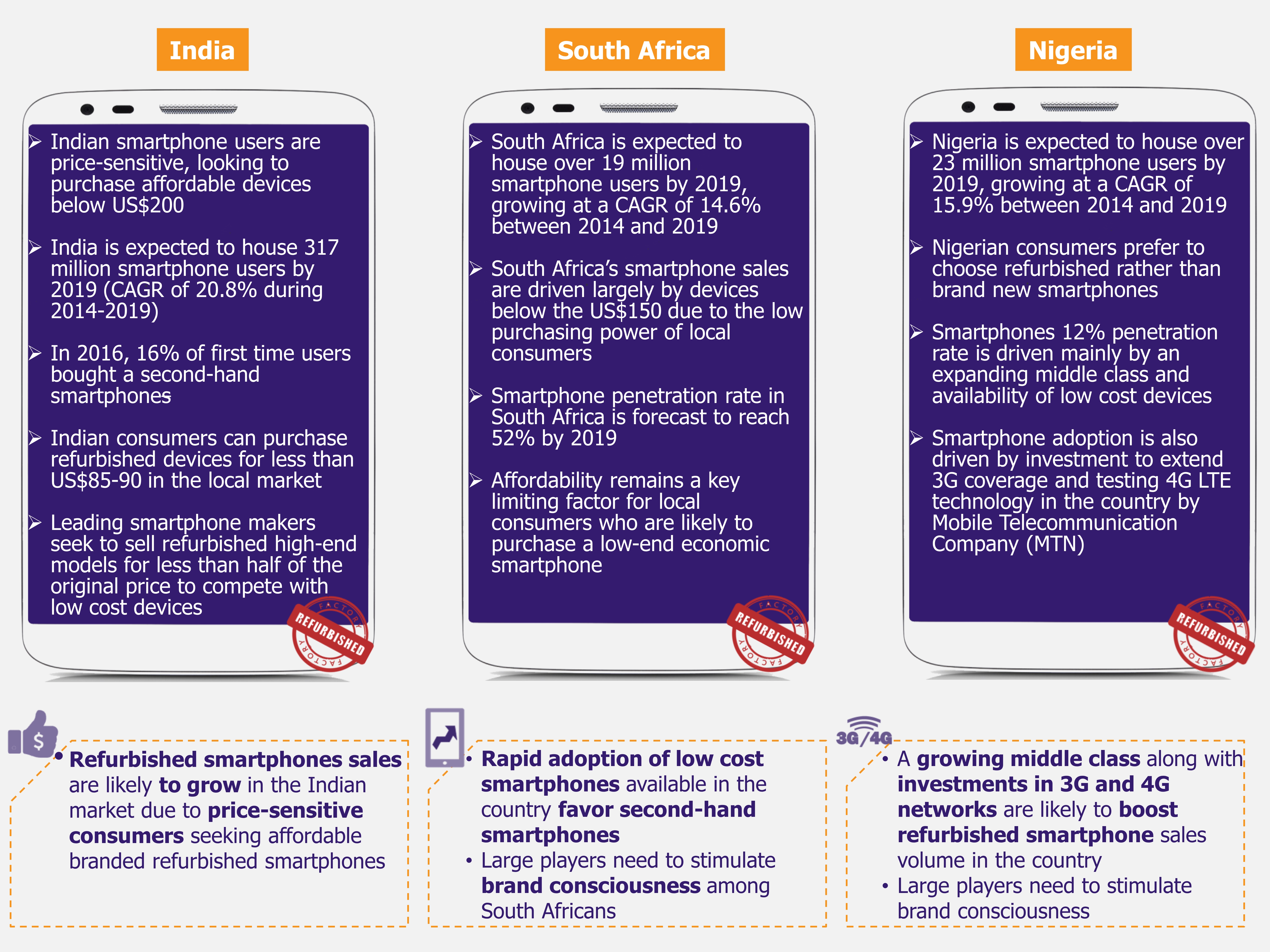 Emerging markets, despite their favorable dynamics that should at least in theory offer a great environment for refurbished phones sales to skyrocket, are not easy to navigate through, especially for high-end devices makers.

Some markets are becoming protective of their local manufacturing sectors, and introduce regulations that make it difficult to import smartphones, especially refurbished ones. India is one such case. In 2014, the Indian government rolled out the Make in India program, with the idea to promote local manufacturing in 25 sectors of various industries, one of them being electronic devices (including smartphones).

Coincidentally, two years later, when Apple initiated efforts to start importing and selling its refurbished smartphones as a way to increase the iPhone’s market share in the country, these efforts were unsuccessful. The Indian government rejected Apple’s plan, justifying its decision with a concern about the electronic waste increase caused by a deluge of refurbished smartphones entering the country. As a result, the refurbished version of Apple’s iPhone is currently sold only by online commercial platforms (e.g. Amazon, Snapdeal) from vendors that are not always official company retail stores. This could fuel sales in a parallel market, not necessarily benefiting either India’s local manufacturing or Apple.

In case of South Africa and Nigeria, both markets share similarities in terms of advantages as well as potential barriers for refurbished smartphone sales volume to grow. Nigeria’s GDP contracted by 2.06% in the second quarter of 2016, causing wary consumers to maintain their old phones or purchase very economic options due to decreasing disposable income. In South Africa, consumers are also highly price-sensitive with a very limited brand consciousness.

The rapid level of smartphone adoption registered in both markets is seen mainly in handsets with retail price of US$150 or less in South Africa and US$100 or less in Nigeria. Therefore, refurbished high-end models may dazzle local consumers, but low-cost devices can be expected to represent an obstacle for brands such as Samsung or Apple, as these smartphone makers are likely to sell their refurbished devices for half the original price which is still above the consumer-accepted purchase price in these two markets.

In case of India, the recent rejection of Apple’s plan to import and sell refurbished smartphones is an indicator that similar issues might be faced by other large players willing to do the same in the future. However, as one of the world’s largest smartphone markets, India is likely to continue building a strong sense of brand loyalty among consumers, especially towards Samsung’s and Apple’s brands in general (smartphones and beyond), and consumers will demand access to these brands (Samsung and Apple already held a 44% and a 27.3% market shares, respectively, in 2016).

The risk of India’s market being flooded with refurbished smartphones sold in a parallel market or online commercial platforms without proper regulation by authorities could result in lost control over excessive e-waste in the country, without necessarily driving local production of competitive products. Consequently, India’s government might have to consider the possibility of allowing large manufacturers to import factory-certified second-hand smartphones into the country, perhaps under the condition of refurbishing the devices in India.

In Nigeria and South Africa, the consumer price sensitivity and limited brand loyalty seem to be the most pressing issues for large players such as Apple or Samsung intending to sell their refurbished phones. In both markets, the rivalry is rather fierce, mainly due to a relatively strong presence of smaller regional manufacturers and large Chinese companies (e.g. Xiaomi) that offer affordable smart devices. While consumers in these markets are willing to spend up to US$100-150 for a device, in most cases they lack brand loyalty.

Apple or Samsung are likely to be negatively affected by this when launching their refurbished high-end handsets at half of the device’s original retail price, which in most likelihood would still be above the price consumers in these markets can and are willing to spend. As a result, large players may have to set their eyes on a long-term horizon, and slowly build the brand loyalty sense in local consumers and temporarily relinquish on large profits in order to enter these markets and settle among their potential customers.