Australia, as most countries across the globe, is increasing its focus towards renewable energy for future sustainability. These initiatives are faced with the inherent challenge in the renewable energy development – intermittency of supply, i.e. the fact that the supply is not continuously available (e.g. sunlight or wind) and it cannot be modulated according to demand. To tackle this, power companies and the Australian government are making significant investments in pumped hydro energy storage (PHES) plants. These plants facilitate the storing of energy when supply is high but demand is low, so that it can be used when demand supersedes supply levels. Currently, several PHES projects are under assessment and development in Australia.

In 2015, the Australian government set renewable energy targets of 33,000 GWh in large-scale generation, equaling to about 23.5% of Australia’s total electricity generation by 2020. The ongoing pace of new and upcoming solar and wind power projects during 2017, 2018, and 2019 has ensured that the targets set under the Renewable Energy Targets (RET) scheme are met. Moreover, if the current rate of renewable installations continues, Australia is on track to achieve 50% renewable electricity by 2025 and 100% by early 2030’s.

To make renewable energy more sustainable, the government is looking at storage options for solar and wind energy. Solar and wind energy are inherently intermittent in nature. This means that energy can be harnessed based on availability of these resources and not based on the demand at a certain time. This makes renewable energy supply less predictable and dependable in comparison with fossil fuel-based energy.

This is where pumped hydro energy storage can prove useful. PHES plants can store renewable energy on a large scale within the electrical power grid. Fundamentally, PHES plants work in a similar way as regular hydro energy plants, wherein water flows from a higher reservoir to a lower reservoir, generating electricity by spinning the turbines. However, the key difference in case of a PHES plant is that in case when more energy is being produced than the current demand level, the plant uses the spare energy to pump the water back from the lower reservoir to the higher reservoir, thereby making it available again to generate power when the demand rises. 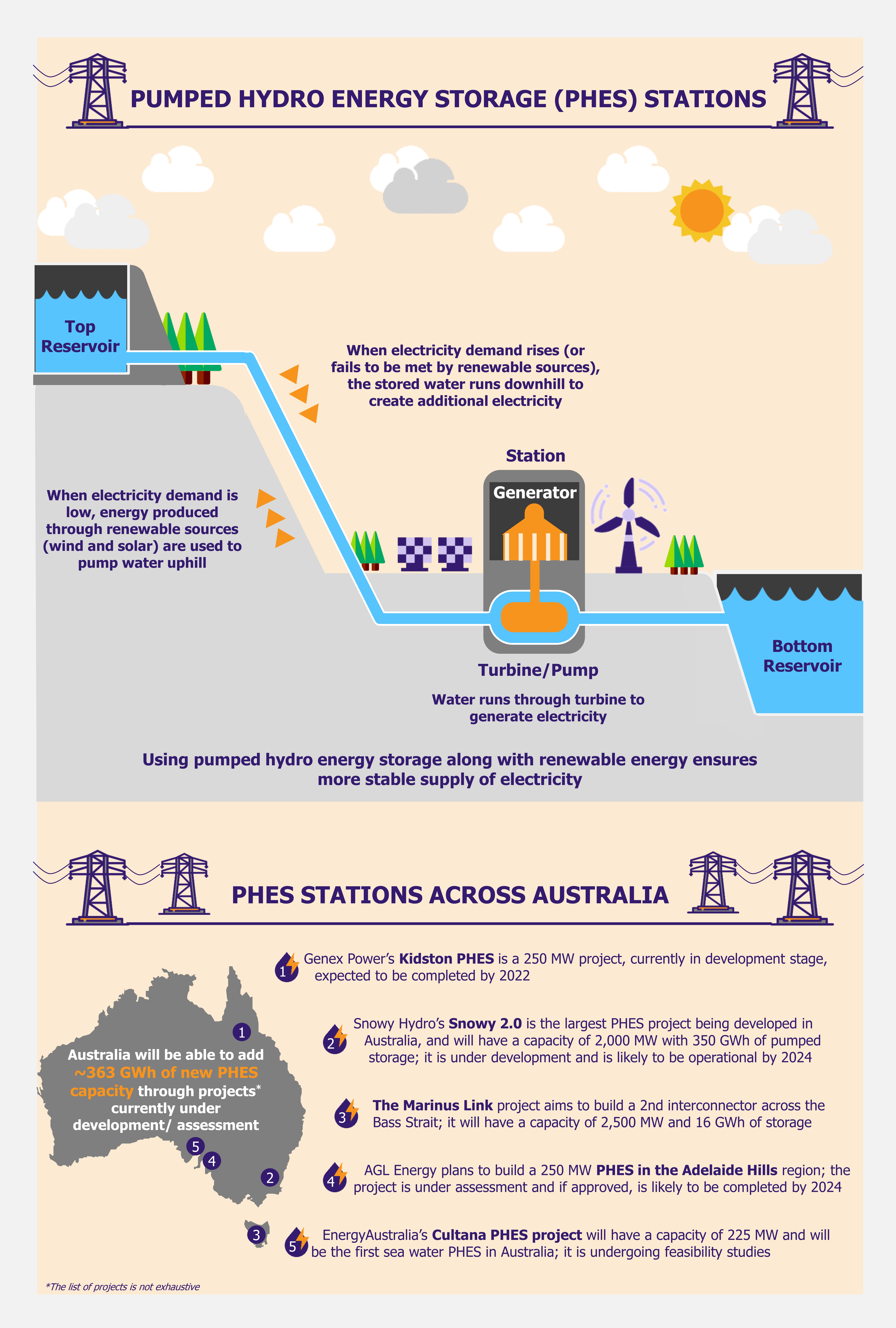 PHES stations are all the more beneficial when integrated with renewable energy generating grids. Since it is difficult to ascertain how much energy will be produced through wind and solar at a given time, pumped hydro energy storage helps balance it in accordance to the demand levels. When wind and solar grids produce more energy than currently required, the excess energy can be used to push the water uphill in the integrated PHES plant, which can be used later when energy produced through renewables is lower than the demand levels. Thanks to this, these plants act as energy-storing batteries.

PHES stations are all the more beneficial when integrated with renewable energy generating grids. Since it is difficult to ascertain how much energy will be produced through wind and solar at a given time, pumped hydro energy storage helps balance it in accordance to the demand levels.

Owing to these benefits, Australia is extensively exploring this technology. It is estimated that the country is looking to add about 363 GWh of new pumped hydro energy storage capacity, through nine projects that are under consideration and development. In addition to this, there are several other projects that are at initial stages of assessment and do not have a specified capacity yet. As per experts, Australia needs about 450 GWh of storage to support a 100% renewable electricity grid. Some of the most prominent PHES projects in Australia include Snowy 2.0, Marinus Link Project (Battery of the Nation), and Kidston project.

In addition to these, there are several other projects that are currently in the feasibility or development stage. In May 2018, Delta Electricity, an Australian electricity generation company, received development approval from the South Australian government for a 230 MW Goat Hill pumped hydro project. Altura Group (Australia-based renewable energy project developer and advisor) has been hired as the project developer. The project is expected to cost about US$284 million (AU$410 million) and the South Australian government has committed about US$3.3 million (AU$4.7 million) to facilitate final project development. The project is expected to be completed by late 2020.

Another such project is EnergyAustralia’s Cultana Pumped Hydro Energy Project, which is the first sea water pumped hydro energy storage project in Australia. The project will have a capacity of 225 MW. In 2018, it received US$0.35 million (AU$0.5 million) funding from ARENA (Australian Renewable Energy Agency) to support the US$5.6 million (AU$8 million) feasibility study. The project is currently undergoing feasibility studies and concept development and, if approved, it is expected to be completed by 2023.

Similarly, in April 2019, Australian utility company, AGL Energy, unveiled plans to build a 250 MW pumped hydro energy storage facility in South Australia’s Adelaide Hills region. While the company has received the right to develop, own, and operate the plant, the project is currently under assessment. If approved, the project is expected to be completed by 2024.

PHES projects and their viability

Large sums of investment into PHES projects by private companies as well as the federal government indicate its criticality in the overall transition of Australia’s energy grid to include a larger share of renewable sources. Moreover, several coal-based energy plants are retiring in Australia in the near future, which will further create an opportunity for renewables with storage options to replace the current form of generation. As per experts, the cost of energy from wind and solar combined with storage (from either pumped hydro or other form of batteries) will be lower than generation from new coal or natural gas plants post the retirement of existing coal and gas plants. This further makes the case for huge investments in pumped hydro energy storage.

As per experts, the cost of energy from wind and solar combined with storage (from either pumped hydro or other form of batteries) will be lower than generation from new coal or natural gas plants post the retirement of existing coal and gas plants. This further makes the case for huge investments in pumped hydro energy storage.

However, apart from PHES plants, there are other forms of storage as well. These primarily comprise of lithium-ion batteries. One example of such a battery is Tesla’s Hornsdale Power Reserve Battery. It is located in Narien Range (South Australia), was constructed in December 2017, and has a storage capacity of 129 MWh. However, these batteries are not a direct competitor/substitute for PHES plants, as they are usually smaller projects than pumped hydro energy storage plants and have a relatively shorter life as well. Moreover, pumped hydro energy storage is a more cost-effective way of storing energy, when compared with lithium-ion batteries.

Therefore, the government is being fairly cautious about commissioning PHES projects at the moment. In fact, all of the current projects under review may not be commissioned considering their economic viability. PHES plants need a revenue of about US$139,000 (AU$200,000) per MW per year to be economically viable. While this can be achieved in the long run when there is higher electricity volatility owing to greater dependency on renewables (after the coal generators have retired), currently this cost cannot be justified as electricity volatility is lower with coal and natural gas generation. Moreover, different political parties have a different take on Australia’s energy mix. Thereby, the boost provided to the PHES sector with respect to cheap financing and subsidies will depend on the political party in power, which in turn will affect the economic viability and profitability of pumped hydro energy storage plants.

Moreover, new technologies are being developed at lightning speed, which may further affect the uptake for PHES plants. One such emerging technology is concentrating solar power, in which solar energy is stored in molten salt. This technology can provide several hours of storage and can also act as a baseload power plant. However, currently, this technology is much more expensive when compared with pumped hydro energy storage technology. At the same time, with growing focus on renewables globally, there are always possibilities of new technologies that solve the energy volatility problem in a most cost-effective and efficient manner.

Pumped hydro energy storage plants seem to surely have a secure place for themselves in Australia’s energy grid in the long run. With coal and natural gas generators retiring, there will be an increasing push for renewables to fill in their shoes. Renewable energy needs storage options that are stable and effective. PHES plants developed today will be operating for the next century providing a good base for Australia to move to a 100% renewable energy when it is ready. While investments in these projects run high, several large energy players in the Australian market are looking for investment opportunities in this form of storage as they believe it will play a critical role in Australia’s energy grid in the coming years.

However, most of the works regarding PHES plants is currently on paper, with majority of the projects still at the stage of seeking financing. The project closest to completion currently is the Kidston Project, which also failed to secure a confirmed off-take agreement (i.e., pre-contracted purchase agreement) with EnergyAustralia and had to settle for an agreement to negotiate an off-take based on the fulfillment of a few conditions. This hints towards a cautious approach adopted by large utility players when it comes to investing in pumped hydro energy storage projects. With utility players, such as EnergyAustralia, claiming that before committing to huge investments in this space, they would like clarity and stability in the national energy policy (that includes an emission trajectory), a lot falls into the government’s keenness to support renewable energy in the future. While it may seem like things are moving in that direction, a stronger emission policy or a higher renewable target is likely needed for matters to gain momentum.