In June 2018, the US Department of Justice held nearly 600 individuals, including doctors, responsible for the largest healthcare fraud in the US history resulting in losses of over US$2 billion. Each year, the American healthcare system loses tens of millions of dollars to fraudulent claims not only overloading the healthcare system but also affecting the security and identity of patients and other citizens. To combat the ill effects of healthcare fraud, the government is laying strict measures to monitor such incidents and is using artificial intelligence (AI) to identify threats before they actually occur.

Out of the country’s total health expenditure, estimated to have to crossed US$3.5 trillion mark in 2018, as much as 10% is lost annually due to healthcare fraud (examples include billing for services not provided, providing services not medically needed, and reporting patients as having a more severe illness in order to obtain higher reimbursement), bleeding not only taxpayers’ money but also billions of dollars from the healthcare system.

Over the past decade, reduction in the number of fraud cases in healthcare programs has emerged as a significant priority for the US government and other federal agencies – US Department of Health & Human Services, Office of Inspector General (HHS OIG), the Centers for Medicare & Medicaid Services (CMS), and the US Department of Justice (DOJ). These agencies make laws, use anti-fraud tools, and also partner with private sector to help protect consumers against healthcare fraud. 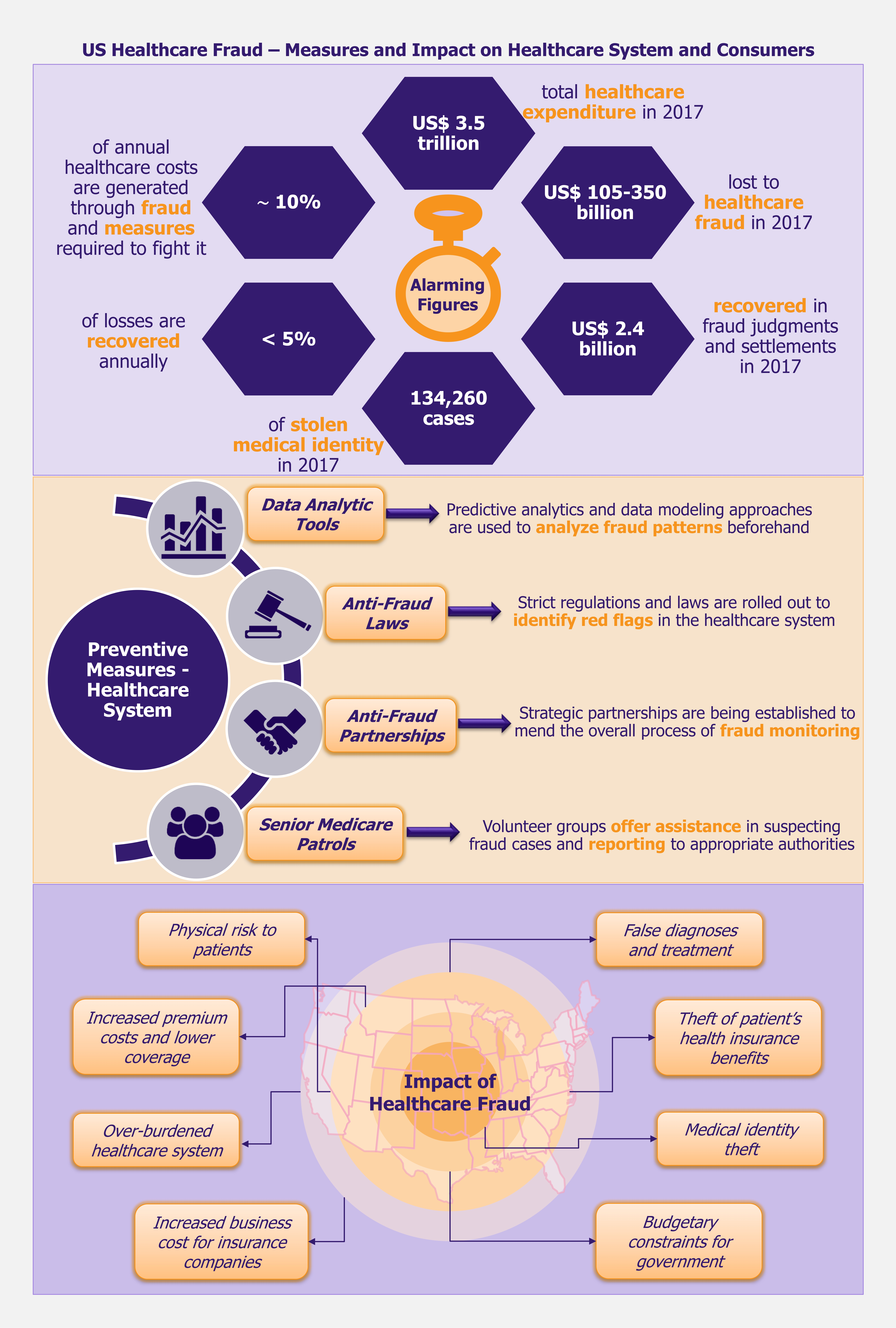 The need to curb the exploitation of healthcare system by healthcare providers for illegal gains has led to the formation of laws that fight fraudsters, ensuring better quality and more equal medical care to all. These laws assist physicians, if they comply by them, to easily identify the red flags with regards to their relation with payers, other physicians and healthcare providers, and vendors. These are:

The government is also focusing on strategic partnerships with other private agencies to fight fraud, which include:

Such partnerships and agencies help prevent healthcare fraud on a national scale, to a certain extent, as they take substantive actions to stop fraudulent payments thus improving the overall process of monitoring fraud.

In efforts to combat fraud committed against all health plans, both public and private, the Healthcare Fraud and Abuse Control (HCFAC) Program was established in 1997, under the Health Insurance Portability and Accountability Act of 1996 (HIPAA). The program was designed to coordinate federal, state, and local law enforcement activities with respect to healthcare fraud and abuse. Under the program, each year, funds are allotted to the various offices of HHS and DOJ to support the effective and smooth functioning of the programs and partnerships directed towards identifying and fighting fraud in healthcare sector. In 2017, a little above US$1 billion was allocated and over US$2.4 billion was recovered in healthcare fraud judgments and settlements and around US$2.6 billion (including amount assimilated from preceding years) was returned to the government or paid to private persons. The program yielded an ROI of US$4.2 for every dollar spent for the period 2015-2017.

Senior Medicare Patrols (SMPs) are grant-funded projects of the federal US Department of Health and Human Services (HHS), US Administration for Community Living (ACL), Administration on Aging (AoA) – an agency providing leadership and expertise on programs, advocacy, and initiatives affecting older adults and their caregivers and families. These grants are supported by SMP National Resource Center, created in 1997 as a demonstration project in 12 regions moved on to become a nationwide program in 2003 and now includes 54 SMP programs across all the 50 states, the District of Columbia, Guam, Puerto Rico, and the Virgin Islands.

ACL issues a new request for proposals for the program every three years, and then awards grants to a selected project across all regions (each US state, the District of Columbia, Guam, Puerto Rico, and the Virgin Islands). Since 2016, SMP grants are funded as discretionary projects by HHS operating division, ACL, through the Healthcare Fraud and Abuse Control Program (HCFAC) – a program designed to coordinate federal, state, and local law enforcement activities with respect to healthcare fraud and abuse. The resource center, through these projects, reaches out to approximately two million beneficiaries each year via 5,000 volunteers associated with the SMP program.

These projects, through trained volunteer workforce, provide education and assistance to Medicare beneficiaries, their families, and caregivers to identify, prevent, and report healthcare fraud. These groups also help protect elderly persons’ health records, financials, and medical identity. Moreover, they provide assistance, when issues are identified, about whether or not fraud is suspected by referring to the appropriate authorities for further investigation.

An effective way to prevent fraud in healthcare system is to identify it before claims are paid, and data examination capabilities such as data analysis, predictive analytics, trend evaluation, and data modeling approaches can be utilized to analyze and examine fraud patterns.

Data analytic tools can identify fraud patterns by developing a certain set of rules. One can set up a ‘rule’ or an ‘alarm’ for identifying fraud related to medical expertise – a healthcare provider claiming for a procedure outside his area of expertise or when the claim crosses a certain amount for a particular test or treatment. These tools use AI, continuously mine data, and identify patterns thus enabling the user to set new rules or alarms.

Up to 30% of total healthcare expenditures in the USA are estimated to be related to fraud, waste, abuse, and errors – a key contributor to soaring healthcare costs in the country. Analytic tools, by tracking fraudulent payments have helped in cutting down costs related to fraud and abuse. In 2014, CMS prevented more than US$210.7 million in healthcare fraud using predictive analytics. In addition, the tool also enables CMS to assign risk scores to specific claims or providers, spot claim irregularities or errors that were earlier hard to detect, and identify inconsistent billing patterns thus eliminating future potential fraud.

Government authorities are not the only entities to use data analysis for monitoring and tracking purposes. Insurance companies are also using similar tools to reap benefits and reduce fraudulent payouts. For instance, United Healthcare, a US-based healthcare and benefits services provider that manages more than one million claims every day, transitioned to a predictive modeling environment based on Hadoop big data platform. The company claims to have spawned a 2,200% return on their investment in big data technology.

The healthcare system in the USA is considered unstable with no sufficient policies in place to regulate the healthcare pricing. In addition to exorbitant prices, over the years, increasing cases of fraud have not only overburdened the healthcare system but also consumers, contributing to large number of personal bankruptcies due to healthcare treatments being disproportionately expensive. Moreover, as the spending on healthcare is projected to rise rapidly in the coming years – CMS projected healthcare spending to reach nearly US$5.5 trillion by 2025, the cost of healthcare fraud is likely to follow suit, resulting in weighing down the consumers even more as they bear the costs of fraud, topped with an existing unaffordable exorbitant healthcare, thus worsening the situation altogether.

Healthcare fraud is a grave problem and affects the entire healthcare system including patients, government, and insurance companies. The foremost effect of fraud perpetrated by healthcare providers is experienced by consumers as this drains the taxpayers’ pockets in the form of higher insurance premiums, reduced benefits, and overall coverage.

In the USA, insurance fraud accounts for approximately $30 billion in lost revenue for the insurance industry and fraud related to healthcare is the second most common form of fraud after vehicle theft. While it is almost impossible to determine how much health insurers lose every year to fraud cases, as low as 5%, or even less, of these losses are recovered annually. The downside is that the heightened cost of fraud and errors are borne by the customers as the companies translate this loss into higher premiums. This deters many individuals from purchasing insurance policies, which makes them unprotected in case of serious diseases and injuries due to reduced medical coverage (or complete lack of it).

Healthcare fraud is a financial gutter in the healthcare system that not only strips individuals of health benefits and insurance companies of money but also results in higher taxes and budgetary nuisances for the government.

Besides increasing the economic costs, such fraud cases extensively affect an individual’s medical identity. In 2017, of total identity thefts reported in US, nearly 3% were related to medical theft standing at a number of 134,260 cases; the overall tally, however, is anticipated to be much higher as the count of incidents unaccounted for remains unknown. Cases of medical identity theft result in misuse of an individual’s medical information that can cause dire consequences.

Each individual is issued a Medicare number, a unique identification number, as part of the national health insurance program. As these Medicare numbers are distinctive and cannot be changed, unless issued a new one, once compromised, such fraud cases put the person’s healthcare and future benefits at a huge risk. The victim could end up receiving wrong medical treatment or, in some cases, even die due to altered or misrepresented medical records as a case of identity fraud. In addition, medical identity theft also impacts an individual financial stability related to medical concerns – the fraudster ends up claiming the treatment amount in medical bills from insurance company, when the victim actually approaches the insurance company to file a legitimate claim, he is informed that he has already reaped the benefits, thus orphaning the victim of his right to medical care. As an extreme repercussion, victims may also have to deal with legal authorities over false allegations of procuring and possessing illegal drugs.

Given the impact on individuals, medical system, and economy, it is clear that healthcare fraud is a costly problem and a critical threat to the US economy as it not only increases healthcare costs for everyone but also affects common people leaving them incapacitated and vulnerable. While the government has achieved some triumph, over the last few years, in detecting fraud cases and punishing the wrong-doers, the success rate of detecting such frauds is always questionable.

At this stage, though immense efforts are being bestowed in formulating laws and technological investments being made to identify impostors, it is very difficult to ascertain what the government has accomplished, as fraud related to healthcare cannot only be measured in terms of monetary loss. The measure should also include the extent of safeguarding the interest and identity of the citizens, and the degree to which this has been achieved is debatable. It must be noted, however, that in the current scenario, where the key focus is on reducing the rate of fraud in the healthcare sector, while keeping the overall healthcare costs in check, the task in hand for the American government is of mammoth scale.