Over the past few years, consumption of diet supplements and functional foods and beverages has seen a rise in India, fueled by an increasing health awareness and a slow shift towards preventative health care. India’s nutraceutical sector offers tremendous opportunities, a fact that has led to the emergence of various players offering wide range of nutritional products. Other than nutraceutical companies, a mass of pharmaceutical and FMCG companies has entered the market leading the dietary supplement and the functional food and beverage category. India’s future in nutraceuticals industry looks promising, however, there is an immediate need for regulatory clarity and cost efficiency to streamline the otherwise progressing sector.

Currently, the USA, Japan, and Europe account for more than 90% of the total global nutraceutical market. But with these markets attaining maturity, the focus of nutraceutical players is shifting towards developing economies, especially those across Asia Pacific, including India. Indian market holds only a 2% market share of the global nutraceutical market and its estimated valuation stands at around US$4 billion as of 2017. It is expected to reach US$10 billion by 2022, increasing at a CAGR of 21% over the period of five years. The high potential of the Indian nutraceutical sector is propelled by the growing awareness of healthy lifestyle and the benefits of a balanced and nutritious diet in Indian population (especially in its urban section). India’s promise to remain a growing market, at least in the near time, also lies in the increasing income of the country’s vast middle class.

It’s not all nice and easy

While India may seem to be a favorable location for nutraceutical players to enter because of the rising urban income and increasing health consciousness, setting up new business here is not easy. Nutraceutical companies have the opportunity to develop and offer wide range of nutritive products for the populace but face challenges in broadening their reach in the local market.

The lack of consistent regulation and standardization of nutraceutical products is one of the key challenges faced by nutraceuticals producers in India. Product cycle in the nutraceutical industry is regulated by strict guidelines through each phase of product development, from the selection of raw materials to the packaging stage. FSSAI (Food Safety and Standards Authority of India) issues regulations on licensing and registration of business, packing and labelling, food products standard, additives, etc. However, irregularities in laid guidelines for registration of nutraceuticals, permitted additives, and packaging often create problems for companies to get product approval quickly leading to costly delays. The most common concern that nutraceutical manufacturers face is the lack of clear differentiation between raw materials, additives, or colors categorized as permitted to use in a pharma drug or a nutraceutical product. What is more, some colors and additives commonly used in food do not find place in the list of permitted additives for nutraceuticals under the regulations. Similarly, any product packaged and marketed in the form of a gelatin capsule is considered as a drug and not necessarily a nutraceutical or dietary product, regardless of its function and indication. Thus, it is necessary to have regulations for permitted additives, product registration, product approval, and pricing specifically for nutraceuticals. In the light of the rapid growth of this segment in India, it is imperative to treat this segment as a separate entity and have clear product definitions and production guidelines.

Another challenge for producers is to arrive at the right pricing for their products in the local market. Though the demand for nutraceuticals is expected to rise considerably, the high prices of nutraceuticals limit their adoption in the Indian market. Nutraceutical producers try to recover their R&D costs in a short span of time by putting a high price tag on their products, but in a price-sensitive market such as India, high costs associated with producing nutraceuticals (or putting high margins on products) is a major restraining factor. Also, affording health products, which cost much more than some of the basic food items, is a key concern for majority of Indian population.

Moreover, with the introduction of GST (Goods & Services Tax) in July 2016 (we talked about it in our article GST Likely to Become India’s Biggest Tax Reform in August 2016), nutraceuticals and other health supplements are subject to 18% tax (with few categories even taxed at 28%), making these products considerably more expensive than before (when they were taxed at 12%). High taxes associated with nutraceutical products could also affect the entry of new players in the market as these new players would be pressed to launch their products at lower prices in order to get a slice of the market. This could only be achieved by either lowering the cost of production or accepting a lower margin, and both of these options might make the new players apprehensive about entering the market now. 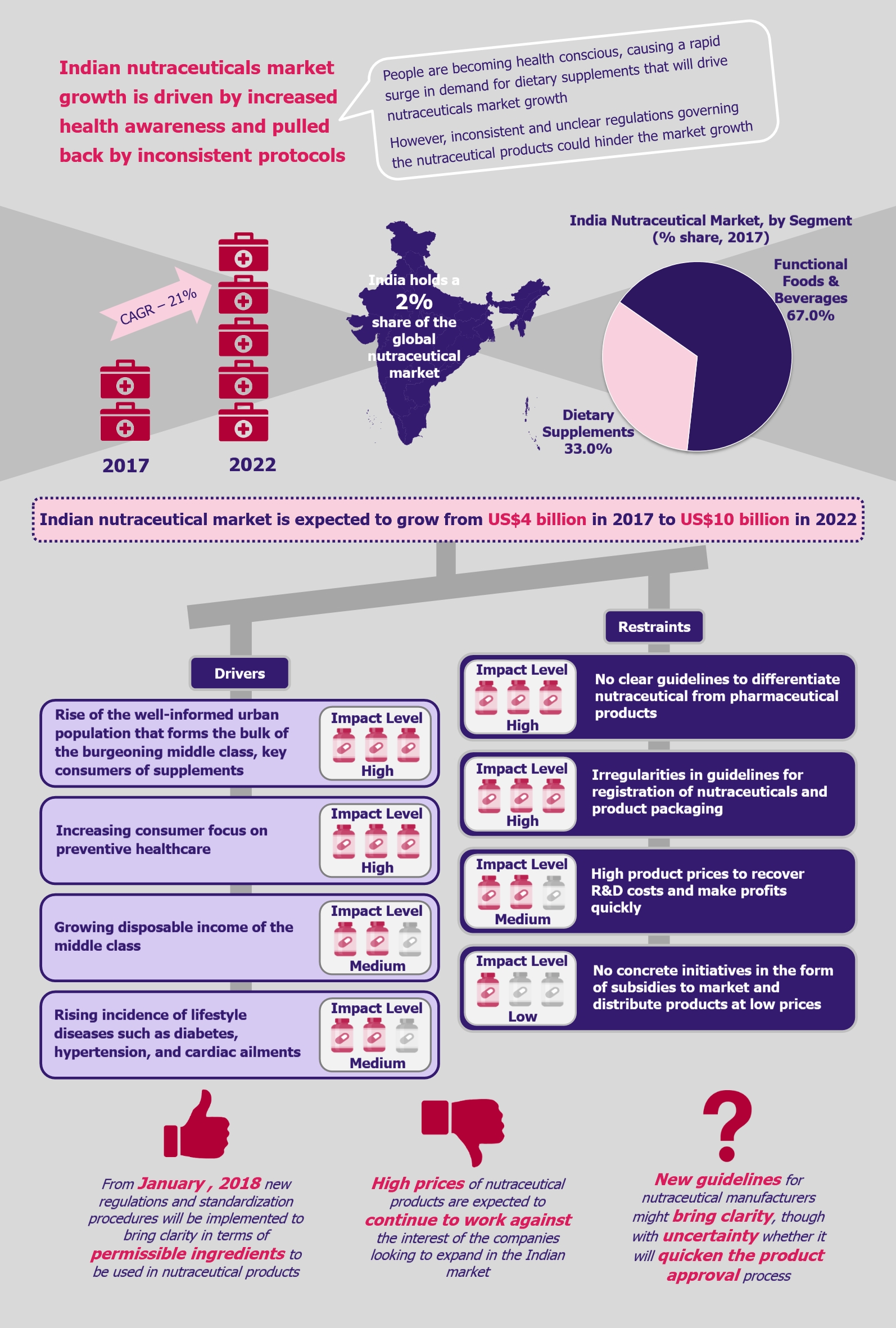 Pharmaceutical and FMCG companies dominate the nutraceutical market with very few pure play nutraceutical companies. Key players in the Indian market consist of both domestic and multinational players. While MNCs such as Amway, GSK, Abbott, and Danone are focusing more on regional penetration, domestic players such as ITC, Dabur, Himalaya, and Patanjali are launching new products to reach out to newer segments. The range of dietary supplements that accounts for about a third of the nutraceuticals market in India is captured by pharmaceutical companies. Meanwhile, there has also been a compelling change in consumer preferences towards functional foods and beverages. These consumables have nutritional and disease preventing qualities and are mainly catered to by the companies in the FMCG domain. The market for functional products is most likely to see a higher growth than the dietary supplements owing to the increasing number of people being affected by lifestyle diseases.

Apart from restructuring the regulations, there is also an urgent need to reduce the price of these products to make them accessible to consumers across many income levels, across the country. Currently, the penetration of nutraceuticals in urban India is 22.5% but this rate stands only at 6.3% in rural parts of the country. Urban consumers, though are aware of the benefits of nutraceuticals and often have higher disposable income, are somewhat reluctant to add these products in their monthly budgets on a regular basis, unless required, due to exorbitant prices. Making these products available at more competitive prices could enable players to capture a good share of urban Indian market over a short span of time.

There are also considerable opportunities beyond the urban segment, as population in rural parts of the country represents a huge untapped potential for nutraceuticals sales. Financial capabilities of rural consumers are surely much lower than of their urban counterparts, but this does not mean that the rural market should be ignored altogether, as this segment can offer considerable sales volume, especially that the incidence of undernutrition in rural population is higher than in urban areas. This market, however, should be approached with a different tactic. Players should consider expanding their reach in this segment with simpler, lower-priced, generic products and with products on which they can afford cutting their margins the most. It is important that they also broaden their distribution reach to make their products available in local dispensaries in rural areas, and work with local healthcare providers to drive awareness and demand for nutraceutical supplementation. But in order to really get a firm grip on the rural segment, the pricing should be much more attractive, and this could be potentially achieved by working with the government, local authorities, and healthcare organizations to launch initiatives in the form of subsidies, tax rebates, or other co-payment forms to allow to bring the product price significantly down. Obviously, this might be difficult to achieve in the near term, as public entities are unlikely to see this as a priority in assigning funds. So till this changes, it appears that a refurbishment of the regulatory framework is going to be the only turning point in the growth route that the nutraceutical players can hope for.