Despite having abundance of renewable resources, Argentina has always had an inclination towards the non-renewable energy in its energy mix. However, in 2016, the incumbent government announced its intentions to explore the renewable resources, especially wind, to ensure that about 20% of the energy mix is contributed to by green energy by 2025 (a shorter-term goal entailed 8% of the energy to be contributed to by renewable resources by the end of 2017). Both local and foreign players have welcomed this announcement and have started pouring in investments into related projects. However, the path to achieving the targets does have obstacles other than investment, such as lack of speedy financing and poor energy transmission.

At the time of the 2015 elections, Argentina was going through an energy crisis. Owing to a shortage of local energy generation, Argentina had been dependent on imports to meet its energy requirements post 2010. This was underpinned by lack of incentives for local and foreign investors to invest in the energy sector and the de-dollarization of energy tariffs (which prevented private, especially foreign investment into the sector, since most companies were not confident about the stability and value of the Argentina peso).

Also, despite Argentina’s abundance of renewable sources, the country’s energy mix was heavily dependent on non-renewable sources, which were imported from neighboring countries – gasoil from Venezuela and LNG from Bolivia. Thus, when pro-business candidate, Mauricio Macri, took office in 2015, his government adopted several reforms to uplift the country’s energy sector, with a prime focus of promoting the use of renewable energy. In October 2015, the Macri government introduced a new program called, RenovAr, to attract local and foreign investments in Argentina’s renewable energy sector. 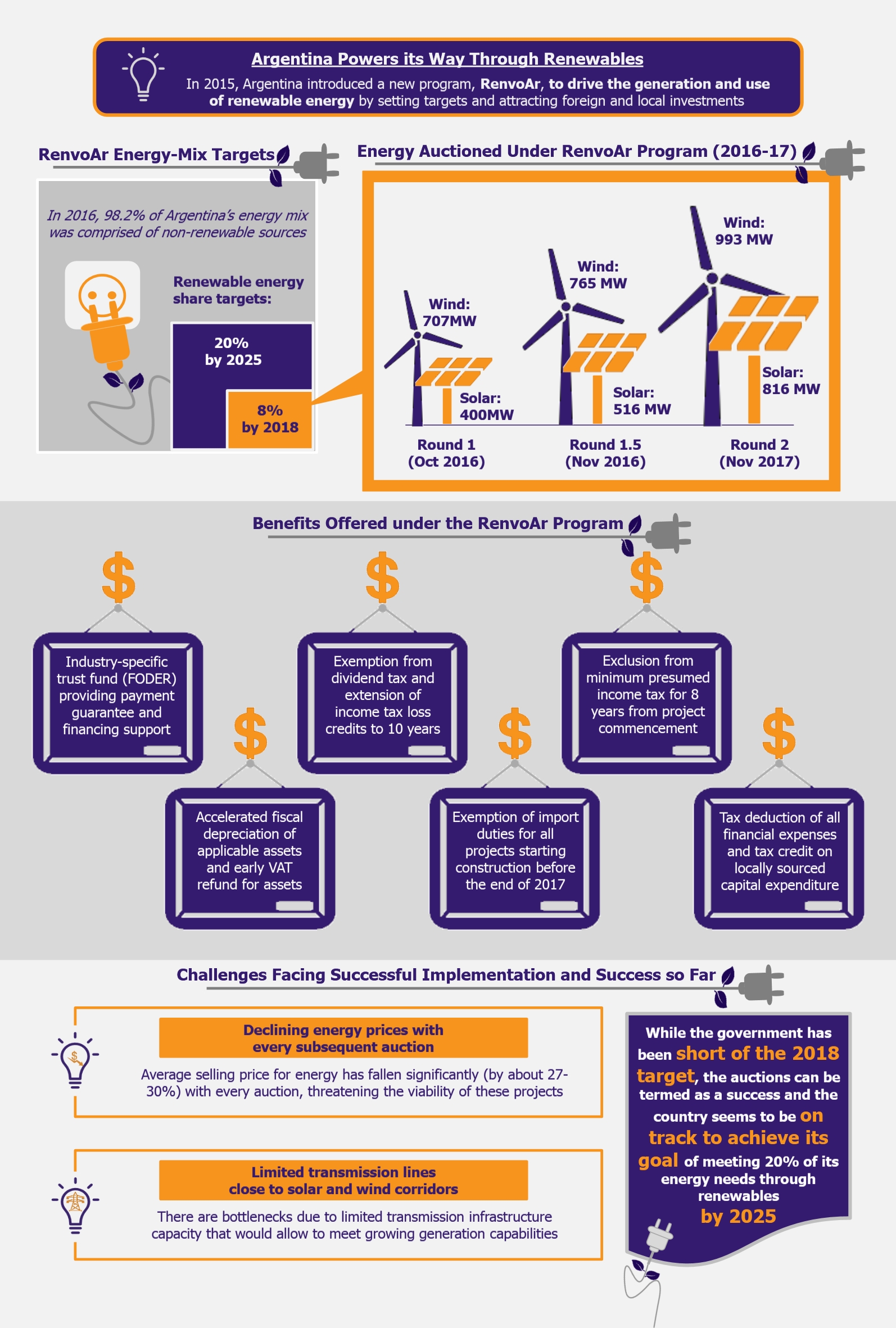 The RenovAr program aims to achieve 20% share of renewable energy in the energy mix by the end of 2025. It has also set a target of achieving 8% of its energy from renewable sources by the end of 2017 (which in absence of the government’s statements of the latter being achieved at the time of preparing this publication, it is fair to assume that the 2017 target was unlikely to have been met). These targets appear rather ambitious, considering that just recently, in 2016, only 1.8% of power demand in Argentina was supplied through renewable energy.

These targets appear rather ambitious, considering that just recently, in 2016, only 1.8% of power demand in Argentina was supplied through renewable energy.

The RenvoAr program has been designed to provide a host of fiscal benefits and financial support to companies interested in investing in the development of renewable energy projects. These include (but are not limited to) exemption of import duties for all projects commencing construction before the end of 2017; accelerated fiscal depreciation of applicable assets; early VAT refund for assets and infrastructure; exclusion from minimum presumed income tax for eight years from project commencement; exemption from dividend tax (subject to reinvestment in infrastructure); extension of income tax loss credits to 10 years; tax deduction of all financial expenses; tax credit on locally sourced capital expenditure.

However, the tax benefits were the highest for projects commencing before the beginning of 2018 and will diminish gradually up till 2025. In addition to these benefits, the government has set up a sector-specific trust fund called Trust Fund for Renewable Energy (FODER), to provide payment guarantees for all tendered power purchase agreements (PPAs) and to also support project financing. This further helps secure investors who have historically been hesitant to invest in Argentina. The government has allocated ARS 12 billion (US$860 million) to the trust fund. Also, the World Bank has approved US$480 million in guarantees to support the PPAs under the RenvoAr program.

Owing to a great deal of benefits and securities offered, the RenvoAr program has been modestly successful. In Round 1 of the RenvoAr program held in October 2016, the government awarded contracts for 1,142 MW capacity (through 29 contracts) instead of the initial plan of 1,000 MW. This was due to a great deal of interest in the auction, which received 123 bids for more than 6,300 MW. The awarded projects included 707 MW of wind energy projects and 400 MW of solar energy projects. The average prices for the projects were US$59.70/MWh for solar and US$59.40/MWh for wind.

The second round of auctions held in November 2016 (Round 1.5) witnessed equal success with a total capacity of 1,281 MW being auctioned off through 30 contracts. The 765 MW of wind energy was auctioned at an average price of US53.3/MWh, while the 516 MW of solar projects were auctioned at an average price of US$54.9/MWh, signifying a visible drop in prices over the two rounds. The auctions were expected to increase renewable energy contribution to Argentina’s energy mix to close to 6% and to bring in about US$3.5 billion in financing over the next two years.

After two hugely successful auctions, the government had planned the third auction (Round 2) in summer 2017, however, the round was later pushed to November 2017 due infrastructure bottleneck. The country has limited transmission nodes in areas with good wind and solar potential and also require to boost the transmission infrastructure to go hand in hand with the RenvoAr program. About 5,000 kilometers of transmission lines would be required over the next three years to match the expanding capacity.

In addition to avoiding infrastructure bottlenecks, the government pushed back the next round of auctions to ensure there were no financial bottlenecks as well. With the winners of the 2016 auctions still seeking financing by mid-2017, the government did not wish to start another auction before the earlier projects were structured.

The Round 2 of the auction (which was held in November 2017) also saw significant success and auctioned off about 2,043 MW capacity instead of the initially planned 1,200 MW. The tender was largely oversubscribed and received 228 bids representing 9,403 MW of capacity. The auctioned bids included about 816 MW of solar power capacity at an average price of US$43.46/MWh and about 993 MW of wind energy at an average price of US$41.23/MWh. This round is expected to bring in a further US$2.5-3 billion in investment.

While the three rounds of auctions can easily be termed as success, it is important to note that most contracts were bagged by local players instead of large international players (such as Spain’s Acciona and US-based AES Corp). This was primarily because large international companies still consider Argentina to be a slightly risky market and the price quoted by them reflected this risk (whereas most local players quoted much lower prices).

Moreover, with every proceeding auction, the average price declined significantly (from US$59.70/MWh and US$59.40/MWh for solar and wind, respectively in October 2016 to US$43.46/MWh and US$41.23/MWh in November 2017). Following this trend, the ceiling for the next auction have been announced as US$41.76/MWh for solar and US$40.27/MWh for wind (however, the date of the next auction has not been announced). This raises major concern, especially for international players, that the prices have declined to a point where projects may not be economically viable. This is valid considering that the Argentinian market holds some risk as well (the country has a credit rating of B+ as per S&P and B3 as per Moody’s). Lower prices may also act counter-productive because in case the winning projects fail to get financing in accordance with the low output prices, the overall confidence in the renewables program may fall.

Lower prices may also act counter-productive because in case the winning projects fail to get financing in accordance with the low output prices, the overall confidence in the renewables program may fall.

However, international players can come into play with regards to president Macri’s another policy that promotes generation and use of clean energy. As per a new rule passed in September 2017, large power consumers are allowed to directly meet their renewable power obligations (8% by 2017 and 20% by 2025) through private supply contracts. This is expected to further pour in investments worth about US$6 billion over the next three years and also lead to the installation of close to 4GW generation capacity. Several players, such as Argentina-based Luft Energia (which has partnered with US-based PE firm, Castlelake) are focusing on this route to enter Argentina’s lucrative renewables energy market, rather than competing in a price-war in the auctions.

Generation and use of renewable energy definitely holds an important place for president Macri and his government is definitely pulling many strings to advance the cause. The three rounds of auction up till now can be termed as success by almost any measure, however, it is too early to comment if the government will be able to reach its ambitious targets. While the RenvoAr program and the FODER trust fund provide real benefits and security to investors, the smooth and timely financing of these projects, especially with declining bidding prices, still remains to be a challenging task. Moreover, the lack of transmission infrastructure leads to further uncertainties regarding the program’s success.

The government has probably remained slightly short of its 2017 target of meeting 8% of its energy needs from renewable sources, however, it is on track to achieve its goal of 20% energy-mix being contributed by renewable energy. Thus, it is safe to say, that while Argentina’s renewable energy goal may be a little too ambitious, the government does seem optimistic about achieving it on the back of a solid incentive program, the World Bank’s support, and keen interest from foreign and local energy players.