The rising annual average global temperature due to global warming is alarming. These changes affect virtually every country in the world, and India is no exception in witnessing extreme weather conditions. To illustrate this, the country faced floods in 2019 that took 1,800 lives across 14 Indian states and displaced 1.8 million people. Overall, the unusually intense monsoon season impacted 11.8 million people, with economic damage likely to be around US$10 billion.

According to the latest climate update by the World Meteorological Organization (WMO), there is a 50% probability of the annual average global temperature temporarily exceeding the pre-industrial level by 1.5 °C in at least one of the next five years. As a result, there is a high chance of at least one year between 2022 and 2026 becoming the warmest on record, removing 2016 from the top ranking.

India has also been bearing the brunt of climate change with the average temperature rising by around 0.7°C between 1901 and 2018. The temperature in India is likely to further rise by 4.4°C and the intensity of heat waves might increase by 3-4 times by the end of the century. In the future, India is likely to face weather catastrophes such as more recurrent and extreme heat waves, intense rainfall, unpredictable monsoons, and cyclones, if clean energy transition measures are not taken. 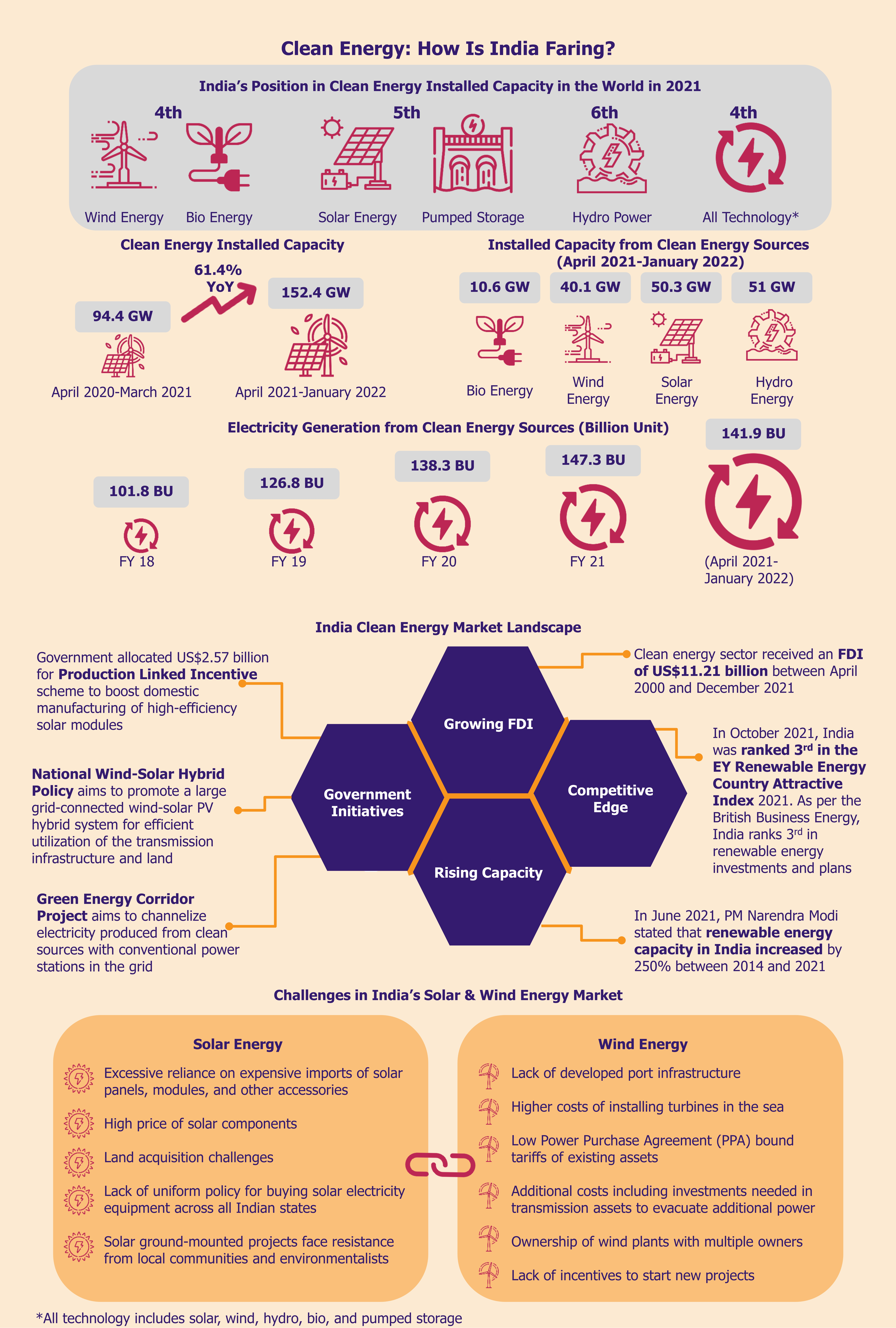 Clean Energy – How is India Faring by EOS Intelligence

India to witness economic losses if initiatives are not taken

The rising population, industrialization, and pollution levels in India are causing emissions (greenhouse gases, carbon dioxide), depleting air quality, and impacting the environment adversely. Also, with coal being a major source of energy in India’s electricity generation, pollution levels are further rising. These factors intensify the need to take clean energy initiatives seriously. If India does not take timely actions to reduce reliance on fossil fuels, it may suffer a heavy loss of nearly US$35 trillion across various sectors by 2070. Industries such as services, manufacturing, retail, and tourism are likely to lose around US$24 trillion over the next 50 years if India neglects climate warnings.

The Indian clean energy sector is the fourth most lucrative renewable energy market in the world. As of 2020, India ranked fifth in solar power, and fourth in the wind and renewable power installed capacity globally.

The installed renewable energy capacity in India was 152.36 GW as of January 2022, accounting for 38.56% of the overall installed power capacity. Energy generation from renewable sources increased by 14.3% y-o-y to 13.15 Billion Unit (BU) in January 2022. The Indian government set an ambitious target of achieving 500GW installed renewable energy capacity by 2030, with wind and solar as key energy sources to achieve the target.

The government has been taking several measures to boost the clean energy sector. In the Union Budget 2022-2023, the government allocated US$2.57 billion for Production Linked Incentive (PLI) scheme to boost manufacturing of high-efficiency solar modules. The scheme provides incentives to companies to increase domestic production of solar modules in order to reduce dependence on imports.

Furthermore, the Indian government has undertaken several initiatives to foster the adoption of clean energy practices, one of them being the Green Energy Corridor Project, which aims at channelizing electricity produced from clean energy sources, such as solar and wind, with conventional power stations in the grid. Another project, the National Wind-Solar Hybrid Policy, was rolled out in 2018 by the Ministry of New and Renewable Energy (MNRE) as an initiative to promote a large grid-connected wind-solar PV hybrid system for efficient utilization of the transmission infrastructure and land.

To meet the growing energy needs of the country, the Indian government is taking measures to look at alternative sources of energy. At the 2021 United Nations Climate Change Conference, India announced its ambitious target of meeting 50% of its energy needs from renewable energy by 2030. In the near term, India aims to achieve 175GW renewable energy installation by the end of 2022.

Besides rolling out various policies and reforms, India has been taking several other measures as well to facilitate the growth of the renewable sector and to meet the energy targets. One such measure is the series of agreements signed by India and Germany in May 2022, which would see India receiving up to US$10.5 billion in assistance through 2030 to boost the use of clean energy. Furthermore, 61 solar parks have been approved by MNRE, with a total capacity of 40GW. Most of these solar parks are under construction.

Apart from the government, also the key industry players see potential in the clean energy market and have ambitious plans to ramp up renewable energy capacity as well as their investments in the sector.

Indian public sector companies including IOC, BPCL, and private sector conglomerates such as Reliance Industries, Tata Power, and the Adani Group have already announced billions of dollars’ worth of investments in renewable energy projects. BPCL is planning to invest up to US$3.36 billion in building a diversified renewables portfolio including solar, wind, small hydro, and biomass. Adani Green Energy is planning to invest US$20 billion to achieve 45GW of renewable energy capacity by 2030. RWE (German multinational energy company) and Tata Power are likely to collaborate to develop offshore wind projects in India. They are planning to install 30GW of wind energy projects by 2030.

Despite the measures taken by various renewable industry stakeholders, India still faces several pressing challenges that it needs to overcome.

The solar energy segment accounts for a majority share (60%) of India’s commitment of 500GW by 2030. With the ongoing momentum, India needs to install 25GW of solar capacity each year. In the first half of 2021, India could only add 6GW of renewable energy capacity, indicating a slowdown in the rate of energy addition. Besides the supply chain disruptions caused by the pandemic, another reason for the slowdown could be the high component prices.

India’s solar industry relies excessively on imports of solar panels, modules, and other parts. Before the pandemic, in 2019-2020, India imported US$2.5 billion worth of solar wafers, cells, modules, and inverters. These components have become 20-25% more expensive since the pandemic. To keep the clean energy market economically viable, the Indian government needs to increase the domestic production of solar equipment.

Another issue is the fact that power distribution companies in some states of India do not encourage solar net-metering because of the fear of losing business and becoming financially unstable. Thus, it is imperative for the government to introduce a uniform, consumer and investor-friendly policy regarding buying solar electricity equipment and accessories across all states in India.

Moreover, some solar ground-mounted projects have encountered difficulty because of the opposition from local communities and environmentalists for their negative impact on the local environment. According to energy pundits, rooftop solar installments are more eco-friendly and are able to create substantial employment opportunities. Consequently, increasing the current target for rooftop installations from 40% to 60% is considered to be a viable proposition for the near future.

Wind energy market also faces challenges due to lack of developed port infrastructure, higher costs of installing turbines in the sea, and delays in starting projects due to the pandemic. As a result, India’s first offshore wind energy project in Gujarat is yet to take off after four years of tender announcements by the government to invite companies to set up the project.

Some of the other challenges of wind power generation in India are additional costs including investments needed in transmission assets to evacuate additional power, issues related to ownership of wind plants by multiple owners, low Power Purchase Agreement (PPA) bound tariffs on existing assets, as well as lack of incentives to start new wind power projects.

As a large developing economy, India’s clean energy targets and ambitions are not just transformational for the country but the entire planet. The energy targets set by India are formidable, but the transition to clean energy is already happening; however, not without challenges.

With government support and aid, the Indian clean energy sector is likely to overcome some of those challenges. For instance, to reduce dependence on expensive imports, the government started taking measures to boost domestic production of solar modules through its Production Linked Incentive (PLI) scheme. Moreover, in 2017, the government increased taxes on solar panels and modules and hiked the basic customs duty on imports of solar and wind energy equipment to encourage domestic production of this equipment. In the budget for FY 2022, the government injected US$133 million into the Solar Energy Corporation of India and US$200 million into Indian Renewable Energy Development Agency. The capital will be used by these entities for running various central government-sponsored incentive programs to attract foreign and domestic companies to invest in this sector. In fact, foreign investors/companies already see potential in India’s clean energy sector, which led to FDI worth US$11.21 billion between April 2000 and December 2021.

India has immense clean energy potential, which has not been fully exploited yet. The shift to renewable energy presents a huge economic opportunity for India. The clean energy sector in the country has the potential to act as a catalyst for economic growth by creating significant job opportunities. According to a January 2022 report by the Natural Resource Defense Council (NRDC), India can generate roughly 3.4 million short and long-term jobs by installing 238GW of solar and 101GW of wind capacity to accomplish the 2030 goal.

In order for the clean energy sector to meet the energy targets and flourish in the future, it will continue to require government support and brisk actions to overcome the challenges.