Home TECHNOLOGY Fitness Apps Thrive in Spite of Issues, But for How Long?

Global fitness app market was worth US$930 million in 2016, expected to grow at a CAGR of 23.6% during 2016-2021 to reach US$2.7 billion. This growth can be attributed to drivers such as steady increase in smartphone adoption, affordable costs of mobile apps, as well as growing health awareness among consumers, including smartphone users. Regardless of how steady growth the market is registering, its expansion may hit a roadblock due to low product differentiation in a fiercely competitive market and unclear privacy policies that may cause wariness among consumers.

Fitness apps are becoming a new way to stay fit for smartphone and tablet users. During 2014-2016, fitness apps users have greatly increased in number, which led to fitness apps usage increase of over 330% in that period. A major driver of this growth is the fact that many fitness apps are highly engaging, according to a 2016 research conducted by Apptentive, a mobile customer experience and engagement software measuring the percentage of customers who retained an app for a certain period of time. In the health and fitness category, an average of 75% of users retained an app for at least 28 days, positioning the category as one of the top performers among news, finance, music, and shopping apps.

The high engagement of fitness apps is partially due to these apps providing users with a constantly-updated overview of their performance details and general wellness, which offers continuous motivation. This certainly benefits fitness apps growth and expansion in the market by not only attracting new users but also keeping existing users as loyal customers (at least to a certain extent). 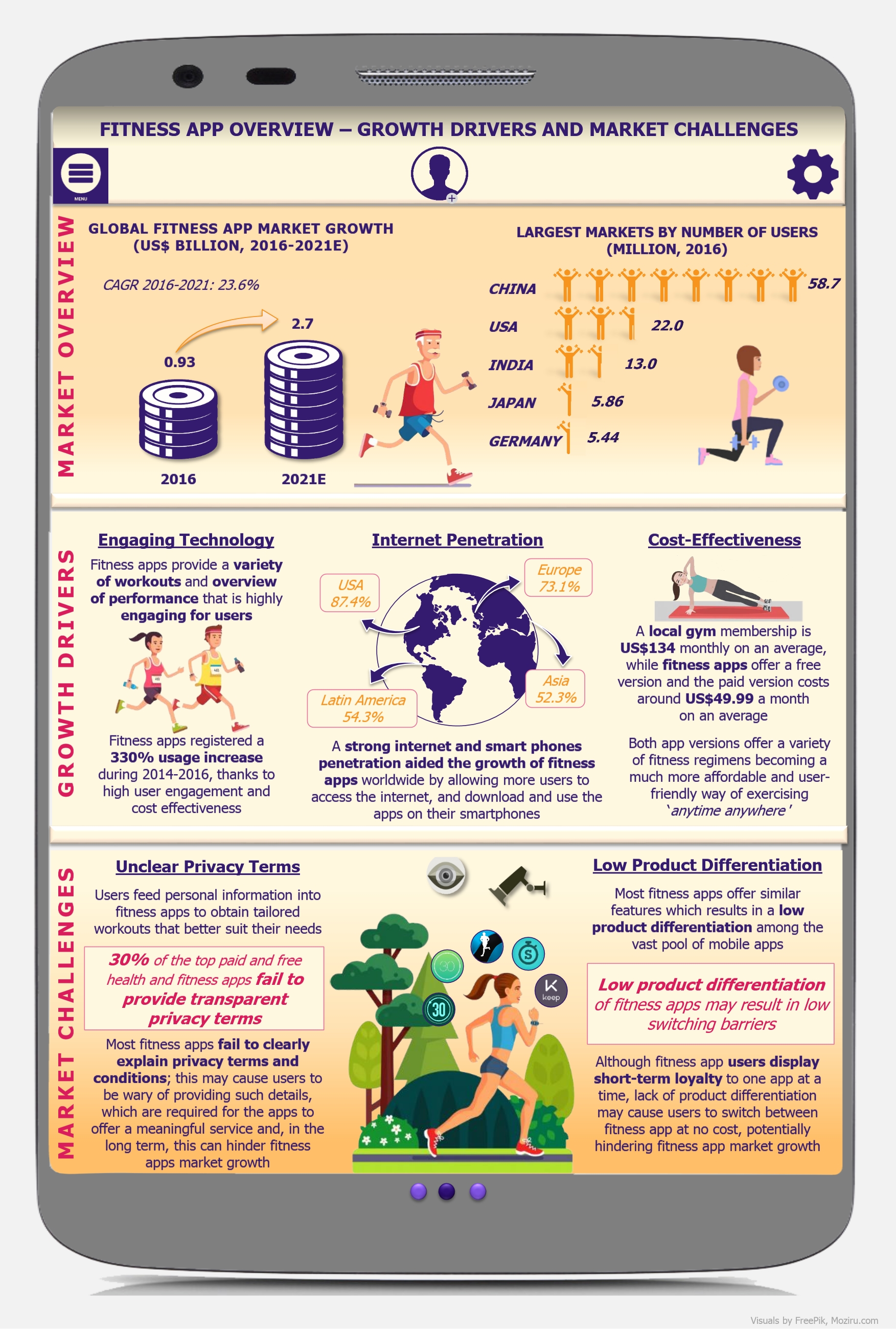 Another driver for the fitness apps market growth is the cost-effectiveness of these apps, especially in comparison with typical gym membership fees. While a local gym in a city such as New York may charge around US$130 a month (plus a sign-up fee in some cases), fitness apps offer basic training routines, tracking location, and a calorie counter free of charge. Most fitness and health apps also offer an upgraded version with extra features, such as personal trainer, at prices ranging between US$2.99 a month and US$49.99 for an annual subscription.

These drivers bring about a favorable market environment for fitness apps to thrive, further underpinned by an estimated 2.1 billion smartphone users globally in 2016, a strong internet penetration – 87.4% in the USA, 73.1% in Europe, 54.3% in Latin America, and 52.3% in Asia, and a growing health awareness among an increasing number of people.

What may seem as a challenge is the fact that many fitness apps do not manage to stand out in the vast pool of apps, resulting in lack of product differentiation in the market. Most fitness apps offer very similar features – workout routines adjusted to the user’s level of fitness, sharing workout results online, etc., with focus on increasing user’s engagement with the app. Although this last point seems to have been achieved as fitness app users seem to be generally loyal to one app, a low product differentiation means low switching barriers for the users over long term, while limited innovation in introduction of new features can potentially hinder fitness app market growth.

Another challenge for fitness app developers is to improve the apps’ privacy policies. Fitness apps collect a gamut of sensitive, personal information about the users and require the geo-location feature to be enabled during workouts, meaning user’s location can be pinpointed at any time while using the app. Fitness apps mostly fail to clearly specify how this information will be handled. According to a report published by the Future of Privacy Forum (FPF), USA-based think tank and advocacy group, 30% out of the top paid and free health and fitness apps found in the App Store and Google Play in 2016 lagged behind in providing basic transparency about the app’s privacy terms. In other words, there is a probability that personal user information logged on the apps could be misused, weakening consumer’s trust, which could translate into users choosing not to use fitness apps to exercise, as their awareness of privacy issues increases.

Such lack of transparency from fitness app providers may cause users to grow wary of using the apps to track their workouts and to introduce personal information regarding their health. This can turn out to be a considerable problem for the app companies, as the key advantage and the selling point of their products is personalized data analysis, training plans, performance charts, etc., for which it is essential that the user allows the app to gather their personal health and workout input data. Without this, the use of these apps is virtually pointless.

Fitness apps have proven to be highly engaging causing consumers to rapidly adopt the ’anytime, anywhere’ way of exercising and to continue using these apps through extended periods of time. While convincing potential users to start using any fitness app does not seem to be a problem and customer acquisition does not pose a major challenge in general for the industry as a whole, it appears that low product differentiation is the key obstacle for individual developers to get their products to stand out in the jumble of similar apps, and this lack of differentiation might be the factor to hamper fitness app market growth.

Some app providers seem to be noticing this, however they are trying to tackle this issue by doing everything but truly differentiating their products, and instead attempt to outdo their competitors by trying to shout loud about their own apps. As many apps lack differentiation and tend to melt into one vast pool of similar apps, fitness app developers are trying to make their products be more heard and visible using social medial to gain a competitive advantage.

One such case is the Sweat app, belonging to the Australian international fitness figure Kayla Itsines, who has been using social media extensively – mainly Instagram and Facebook – as a means of promotion for her app. By implementing a well-designed and aggressive social media marketing strategy, the Sweat app spread around 195 countries engaging 11 million users in 2017 alone. In that same year, the app registered US$100 million in revenue. The use of social media (hashtags, motivational photos, short videos, reposting before and after pictures of app users who had made remarkable progress) granted major visibility in the market and an increase in new subscriptions, without the need for actual innovation and truly unique selling proposition.

A lot of fitness apps offer user workouts based on generic information introduced by the user (e.g. weight, height, age) and data measured by GPS, accelerometer, or gyroscope, however lack the ability to register the body’s real-time performance, which has an impact on the accuracy of the gathered data and recommendations. This gap offers a good opportunity to differentiate and the app developers should try to align their applications with current trends such as the increasing popularity of wearable devices and smart garment.

Fitness apps companies might want to continue to seek to collaborate with garment industry players to develop smart garment – a piece of clothing such as a sport bra with conductive threads woven into the fabrics to work wirelessly with a smartphone. Smart threads in the fabric are capable of reading user’s biometrics, for instance heart rate, body temperature, and dehydration, among others that otherwise a smartphone would be incapable of registering on its own. By integrating the smart garment with a fitness app, the latter can use the real-time data collected on the body’s actual performance to accurately monitor workout sessions, giving a range of possibilities to use this data to differentiate the service offered by the app. As a result, the end product could stand out in the vast pool of apps while facilitating the user to efficiently reach their personal goals. It is a path for app developers to consider, as the growth of standard, smartphone-based apps is surely going to be limited.