Due to its poor logistics infrastructure, bureaucratic bottlenecks, and heavy reliance on roads, India has long suffered from high logistics costs. This has significantly impacted its global trade competitiveness. To address these challenges, the Modi government, in 2015, launched Bharatmala Pariyojana, a flagship project that aims to transform India’s logistics infrastructure. We are taking a look at the key aspects of Bharatmala to assess whether the project has a chance to be the game changer for Indian logistics industry.

India has been long known for its inefficient logistics and freight management. The current freight modal mix is highly skewed towards roadways, which account for over 60% of the total goods transported. This signals under-utilization of cost-effective transport modes such as railways and waterways. India has therefore one of the highest logistics cost, standing at around 14% of its GDP against the average of 6-8% in many other countries.

India has one of the highest logistics cost, standing at around 14% of its GDP against the average of 6-8% in many other countries.

To improve India’s logistics and trade competitiveness, the government, in 2015, launched its ambitious Bharatmala Pariyojana, an umbrella of programs that aim to bridge the current infrastructure deficiencies through corridor-based development across the nation. This in turn is expected to result in faster movement of goods and in a boost of national as well as international trade while reducing logistics costs.

The project aims to construct a network of 66,100 km of highways at an estimated cost of INR7 trillion (~US$101.7 billion). Under the first phase of the project, a total of 34,800 km of roads with an investment of INR5.4 trillion (~US$78.5 billion) are to be constructed by 2022. The funding for the scheme will be raised through various sources: INR1.4 trillion (~US$20.3 billion) will come from the earmarked Central Road Fund (CRF), INR2.1 trillion (~US$30.5 billion) is expected to be raised as debt from market borrowings, INR1 trillion (~US$14.5 billion) from private investments, and the rest from expected asset monetization of National Highway (NH) and toll collections. 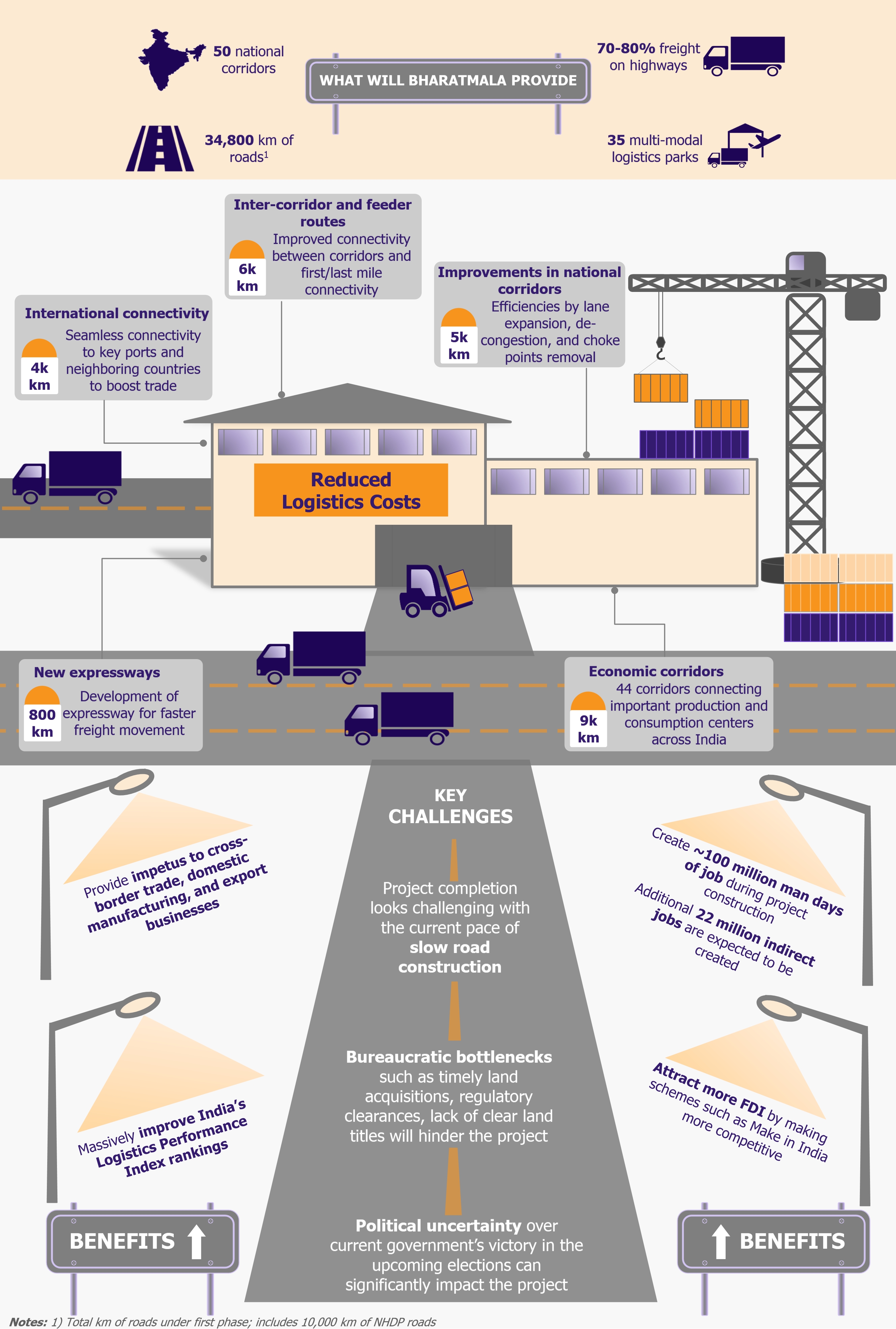 Under the first phase of the project, 44 new economic corridors will be developed to improve connectivity across corridors and remote areas of the country to ensure faster movement of freight. The project will kick start from western states of Gujarat and Rajasthan, and move towards Punjab, Jammu and Kashmir, Himachal Pradesh, Uttarakhand in the north, and towards Bihar, West Bengal, Sikkim, and Assam in the east, right up to Indo-Myanmar border in Arunachal Pradesh, Manipur, and Mizoram.

Further, 35 multi-modal logistics parks are also planned to be developed that will serve as centers for freight aggregation and distribution, storage and warehousing, and other value-added services. These logistics parks will cater to key production and consumption centers accounting for 45% of India’s road freight. As a result, the consolidation of freight is expected to improve efficiencies and reduce logistics costs by approximately 25%.

There is no doubt that, if implemented as per the plan, Bharatmala project has the potential to transform the entire logistics landscape in India. However, given the country’s past project record, there are major hurdles that need to be addressed.

First and foremost, in order to catch up with the ambitious project targets for 2022, the government needs to construct 40 km of roads per day, up from the current average of 23 km. Achieving this looks very challenging, especially when The Road and Highways Ministry has so far lowered the total road projects awards to 20,000 km for FY2018/19 from 25,000 km in FY2017/18.

In addition, timely land acquisitions, lack of clear land titles, regulatory clearances, and dependence on local authorities are some other roadblocks that will hinder project implementation.

Lastly, there is a growing sense of political volatility amid the upcoming general elections in 2019. Given the recent form of setbacks that the ruling party has faced in state elections, there are growing concerns over its victory. A change in government could seriously impact Bharatmala and ancillary projects, since the new government may have different agenda as their priority.

In order to catch up with the ambitious project targets for 2022, the government needs to construct 40 km of roads per day, up from the current average of 23 km.

In 2014, when Narendra Modi’s administration took charge, highway projects over INR1 trillion (~US$14.5 billion) were stuck either for funds or various regulatory clearances. The government has made noteworthy progress since then by expediting many of these projects.

By leveraging technologies and removing bureaucratic bottlenecks, the government seems to be committed to strengthen the sector. A quick look into last two union budgets clearly indicates that the government’s thrust has been on enhancing infrastructure in India and massive budgetary provisions have been made to improve logistics infrastructure. In recent weeks, a big push has been given to complete about 320 important highway projects ahead of the elections next year.

If re-elected, the Modi administration is expected to keep the current infrastructure momentum going. This might not only improve India’s logistics competitiveness, but also make other government initiatives such as Make in India more compelling for private investors. The project might also give a strong push to the economy by generating millions of direct jobs in sectors such as construction, logistics, and transportation, as well as indirect employment opportunities in manufacturing and other ancillary industries. It can boost manufacturing as well as trade, since there will be a surge in demand for goods such as steel, cement, construction equipment, commercial vehicles, etc.

There is no doubt that once completed, Bharatmala has the potential to transform the entire Indian logistics sector. However, at present, for Bharatmala project and the logistics sector, a lot hinges on the outcome of the upcoming elections.