The world is currently witnessing a semiconductor shortage and one of the worst-hit sectors is the automotive industry. A new vehicle uses an average of 1000-1500 microchips, making semiconductors an integral part of automobile manufacturing. Thus, the current shortage has resulted in a slowdown (and in some cases a halt) in production by several car manufacturers, especially of high-feature vehicles that require more chips. This has had a severe impact on auto manufacturers’ revenues in 2021, expecting to cost them close to US$200 billion this year. With no sight of recovery in the near future, the automobile sector must get creative with its supply chains and make some long-term changes in order to sustain production.

The automobile sector globally has been hit by the shortage of semiconductor chips, which are a key component in automobile manufacturing and are used for numerous features, such as fuel-pressure sensors, digital speedometers, and navigation displays.

The shortage stems from the increased demand for chips in the consumer electronics segment (such as laptops, phones, TV sets), which witnessed a spike in demand and sales during the early onset of the COVID-19 pandemic. This was coupled with a subdued demand for chips from the automobile segment during the same time as the environment was less favorable for new vehicle purchase.

Although the demand for automobiles quickly recovered in the second half of 2020, auto manufacturers had already withheld large chip orders due to sales uncertainty, and hence they could not secure a steady supply of chips to fulfill the recovered demand, as most foundries had already adjusted their production and increased their focus on catering to alternative industries.

Moreover, the nature of order contracts largely differs between the automobile and the consumer electronics sectors. The auto sector follows primarily the just-in-time manufacturing principle with focus on short-term orders and purchase commitments for chips. On the other hand, other sectors such as consumer electronics work with long-term orders, which in turn bind the suppliers that have switched production from auto sector chips to other chips. Furthermore, semiconductor players are happier with long-term binding contacts as such contracts provide them with more stability and facilitate better planning of their own supply chain. 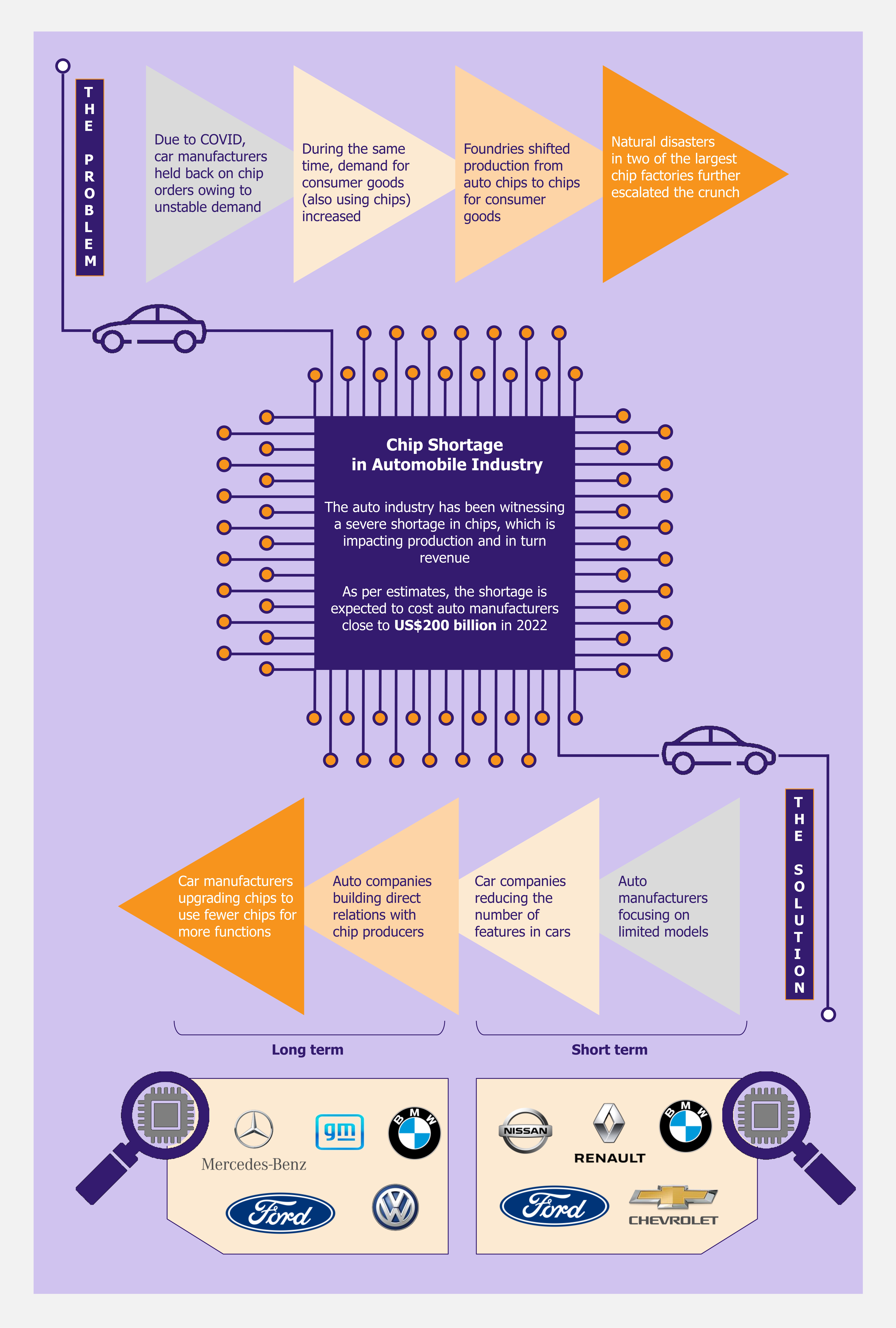 Given these factors, the supply has tightened, forcing several automotive companies to curtail their production levels, which in turn has significantly affected their revenue. To give just a few examples, General Motors saw a 30% dip in sales in 2021 while Ford expected its 2021 earnings to be affected to the tune of US$2.5 billion.

Moreover, there is no short-term sight of respite. On an average, the lead time for chip production is anywhere between four to six months, with setting up new production lines or switching foundries taking even longer (six to twelve months). Further, switching to a new manufacturer may even take longer than 12 months in case new design or licensing requirements need to be met.

To counter this problem in the short run, auto manufacturers are reducing the number of features they offer and are focusing on fewer high-feature models. For instance, Japan-based Nissan is now omitting the navigation system in several of its models. Similarly, Renault has stopped adding a large digital screen behind the steering wheel, while BMW announced that it will remove touchscreen functionality from the Central Information Display in several models. However, these are short-term measures and not ideal for premium car segment as they may impact brand reputation.

Thus, given the circumstances, auto companies have to be innovative with their supply chains to solve this problem in the long run. They also need to ensure that they do not land in a similar situation in the future.

Traditionally, most auto manufacturers deal with only one key supplier (known as tier 1 supplier), who in turn sources all parts from specific component suppliers, including semiconductors from foundries. While this was convenient for the auto manufacturers, this resulted in lack of transparency across the supply chain. Moreover, this meant that the manufacturers did not have direct relations with foundries to ensure smooth supply.

However, in the face of the unfolding shortage, several leading players, such as BMW, Mercedes, and Volkswagen, started building strategic relations with chip manufacturers to get better and direct access to supply lines for semiconductors. In December 2021, BMW signed an agreement with German-based Inova Semiconductors and US-based GlobalFoundries to lock in a steady chip supply for their cars. Similarly, Ford also entered into a strategic collaboration with GlobalFoundries to purchase directly from the chipmaker. Furthermore, in November 2021, General Motors entered into an agreement with Foxconn Technology Group to co-develop chips that can be used in its vehicles.

Additionally, the auto sector is also moving away from the widely followed just-in-time model that facilitated lean inventory and pushed up profits. Companies are now keener to secure long-term non-disrupted supply of chips and are willing to enter into long-term contracts ranging 2 to 3 years.

Apart from this, car manufacturers are also looking at altering designs to limit the number of chips needed. Currently, most chips needed by the auto sector are large and outdated compared with those used for smart phones and other gadgets. Most foundries are now producing new generation microchips for these devices and do not want to switch back to old chips used in cars as investing in old technology is much less lucrative for them.

For this reason, auto manufacturers are considering revamping their chip designs, however, this comes with its own set of limitations. Automobiles need to undergo a host of certifications and safety testing to ensure road readiness. Any changes in designs regarding features such as cruise control, navigation, etc., would require the vehicles to get re-certified and clear safety testing again across all geographic markets, which has significant cost and lead time attached to it. Moreover, a complete overhaul in the chip board would require large amount of investment as it would impact the overall mechanical design of the vehicle.

However, several companies have already started working on this. In late 2021, General Motors announced that it is working with chip suppliers, Qualcomm, STM, TSMC, Renesas, NXP, Infineon, and ON Semi to develop a new set of microcontrollers that will consolidate many functions handled by individual chips and reduce the number of chips required by 95% for all future vehicles.

In the long run, it is expected that several auto companies will work on updating their chips as foundries refuse to downgrade the chips they produce. Moreover, while it will be costly and cumbersome in the beginning, it will be beneficial in the long run as companies will be less dependent on a number of chips, and instead work with a single chip overseeing multiple functions.

Chip shortage has significantly crippled the automotive sector stalling production in an unprecedented manner. It has also cost auto companies billions of dollars, while creating an inconvenience for users as car prices have risen significantly and customers have to wait for months, if not more, for their new cars.

But this shortage has also been a learning opportunity for the automobile sector, which is now working on restructuring its supply chain to reduce reliance on one key supplier. The industry is also placing more emphasis on supply chain visibility to ensure that a similar shortage does not occur in the future. This will mean a real-time insight not just into the key suppliers, but also further into their vendors, i.e. individual part suppliers. This is likely to bring the use of technologies such as IoT and AI to automotive supply chain monitoring in a more prominent manner.

The chip shortage is also likely to result in vehicle design upgradation by several leading manufacturers, so that the new upgraded chips can be used. This upgradation in design to incorporate new chips has been long due, however, auto manufacturers were stalling it because of costs and cumbersome re-certification processes.

The current pressures resulting from the semiconductor and chip shortage, are likely to bring a deep overhaul in the automotive sector, with companies and suppliers willing to invest in supply chain and design-based creative solutions, striving to gain a long-term competitive edge amid the new and challenging environment.