Blockchain, with its ability to offer significantly more transparent and decentralized way of conducting operations, has the potential to come to the forefront of technologies which are disrupting the way most industries work today. While the application of blockchain is still currently focused largely on cryptocurrencies, the technology is slowly finding its way to a range of industries, including the car rental and leasing industry.

Car rental and leasing sectors are growing worldwide, driven by rising technological advancements in transportation and increased need for ease of mobility. A shift in demand from car ownership to car sharing (not to be confused with ride-sharing services such as Uber or Lyft) is driving the growth in car rental and leasing industries.

In the peer-to-peer (P2P) care rental (or car sharing) model, there is no need to maintain any infrastructure or staff required to perform the task of renting, a fact that reduces the overhead costs. Lower costs offered by P2P car rental have resulted in the model gaining prominence. P2P car sharing has significant potential, highlighted by recent investments in car sharing services such as Turo and Getaround. In July 2019, US-based Turo raised US$250 million from IAC, an internet media company, taking its overall valuation to US$1 billion. Getaround, a US-based car sharing company established in 2011, raised US$300 million funding from SoftBank in 2018.

However, the P2P car sharing model is inherently prone to fraud and other illicit activities, causing lack of user trust, which in turn acts as a barrier to scaling of rental business, despite the growing demand for car sharing.

The issue can be aided by the emergence of blockchain, which is acting as the market disruptor. The use of a distributed ledger for car rental and leasing is likely to revolutionize the industry, especially P2P car sharing.

There is a shift in paradigm from car ownership to car sharing, via car rental or leasing. The fact that vehicles are under-utilized and parked (and inactive) most of the time, while the vehicle owners incur ongoing fixed costs such insurance, tax, maintenance, and parking, is further driving this shift.

Emergence of use of blockchain in car rental offers a safe (from frauds) and reliable car-sharing platform, a fact that is likely to further promote P2P car sharing. Inherent unalterable properties of the blockchain offer a secure platform for both car owners (to list their cars) and the customers.

The concept of blockchain in car rental industry works similarly to any other blockchain transaction. Service providers (or car owners) and end clients registered on the blockchain can sign digital smart contracts which execute contract terms based on pre-agreed rules in place, similar to a regular rental model.

The smart contract also contains the necessary information, such as details of the renter (driving license proof, insurance, and credit card details) and data such as car registration number, rate, mileage, length of rental, and credentials of the car owner. All financial transactions (rental payment) can be done either through a card, or using associated cryptocurrencies and tokens purchased to get registered on the blockchain. 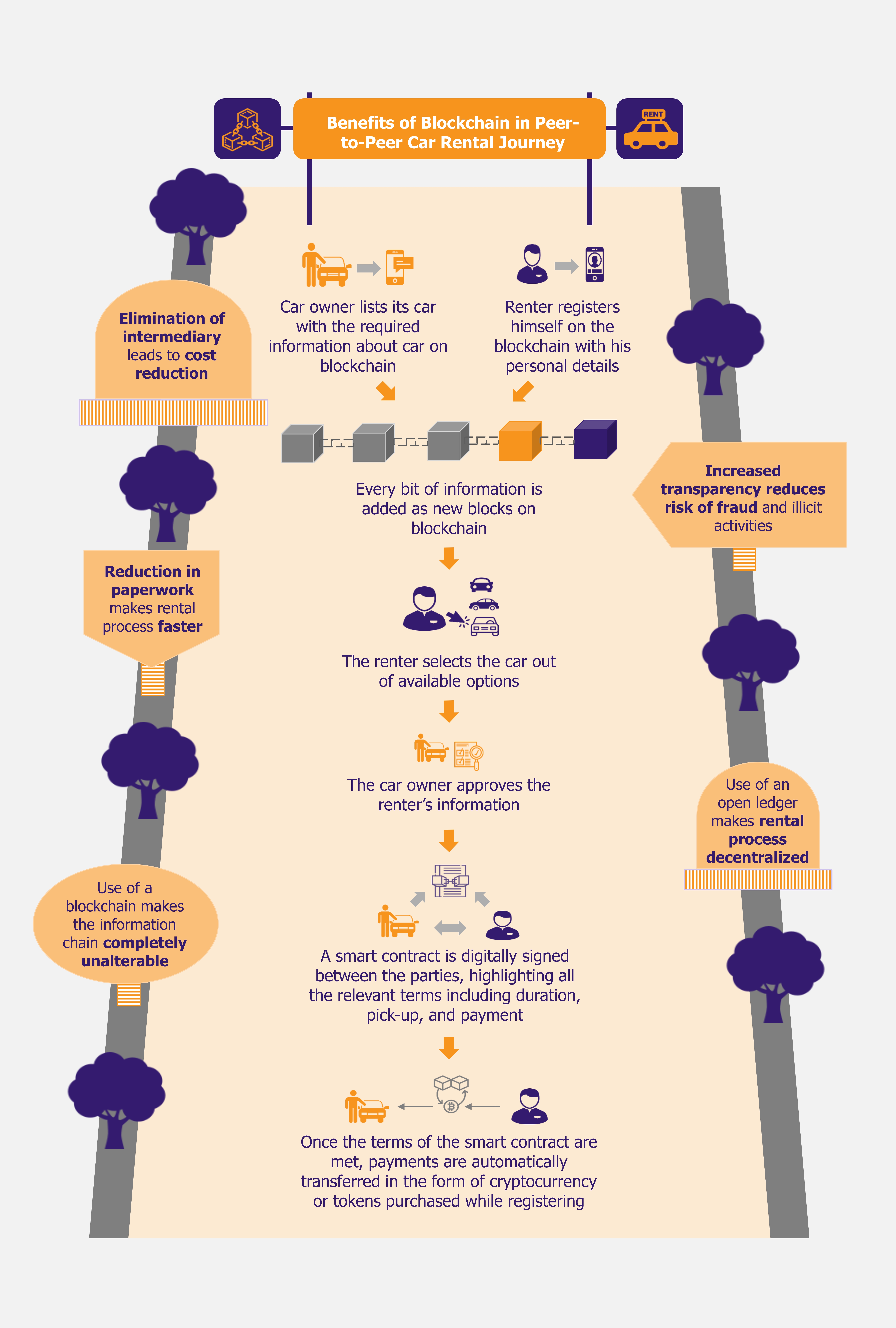 The process is fully decentralized and digital without any intermediary required which is the key advantage of car rentals being executed over blockchain. Transparency of transactions made over a distributed ledger also adds to the credibility, thus lowering the risk of any fraudulent activity to a great extent.

Lower fee offered due to elimination of intermediaries is another major advantage of using the blockchain technology in car rental industry. For example, HireGo, a UK-based blockchain-based car rental start-up, claims to offer transaction fee up to 35% lower compared with traditional car rental charges under the existing B2C model. Moreover, use of smart contracts has made the system direct and reliable, as information on the contract is unalterable.

Blockchain technology is designed to encourage a sharing economy platform so that businesses such as P2P car rentals and leasing can become integrated and cost-effective, through collaboration among participants in a common, transparent, and “trustless” (or distributed trust) environment, which are the primary attributes of blockchain.

When it comes to leasing, blockchain has even more potential. Tracking a car right from the OEM, transfer of ownership, tracking of repairs, mileage, fuel, and maintenance over a single distributed ledger can help bring visibility across the leasing journey. This in turn can help customers avert mileage fraud, while also eliminating any disputes at the end of the lease term.

With all necessary and unnecessary repairs being visible to all parties involved, calculation of charges and violation penalties is likely to become much easier.

The use of a distributed ledger also eliminates the need of undertaking time-consuming paperwork at each node (or stakeholder) of the leasing value chain, thereby improving the overall efficiency of the process, while also cutting costs, making it much more cost-effective to lease a vehicle.

Similarly to its function in car rentals, a distributed ledger also eliminates high costs charged by car leasing companies, resulting in increased popularity P2P leasing of vehicles through smart contracts. Blockchain can also be used as an open maintenance log, as well as for the provision of other value added services such as insurance and toll payments. 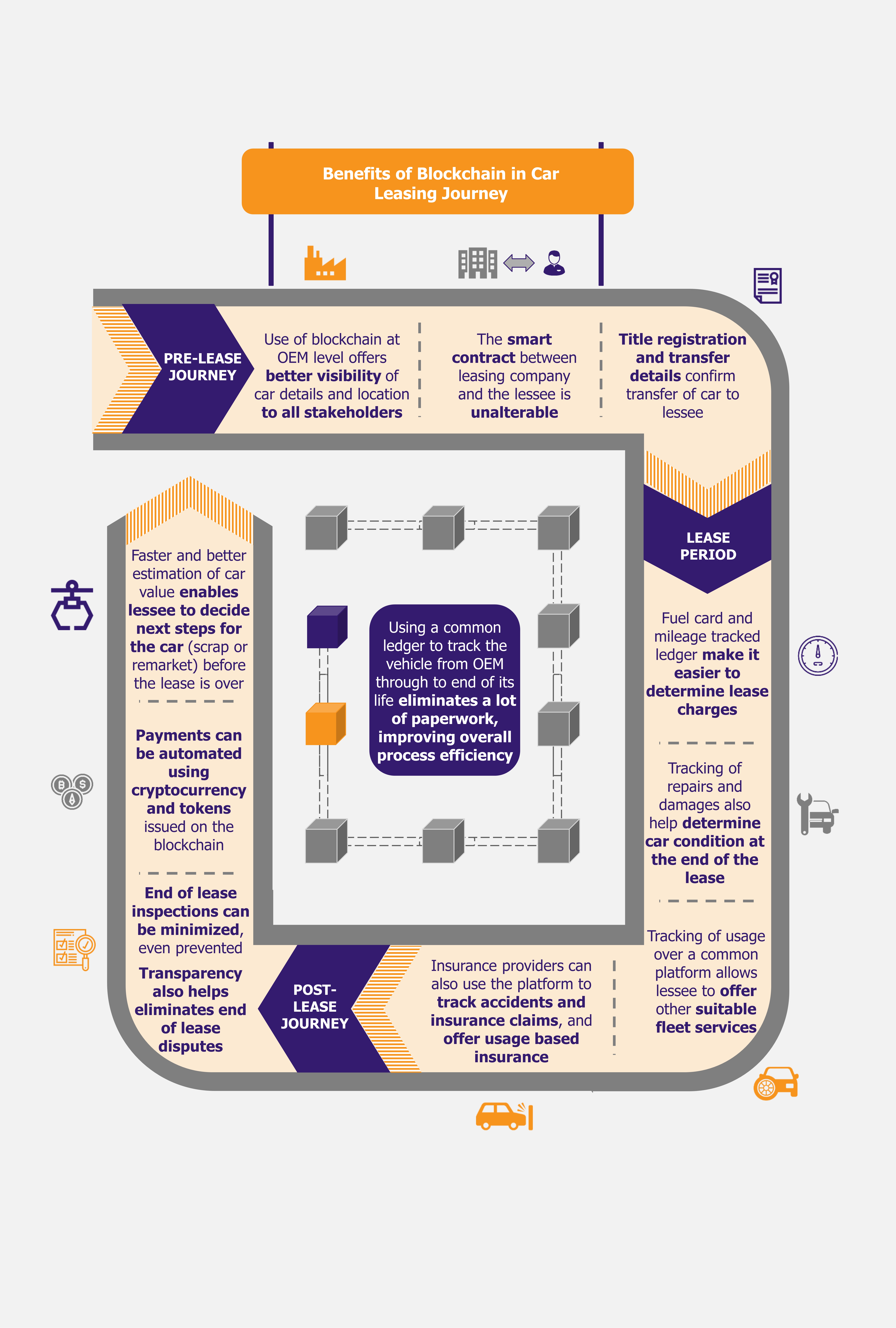 Transparency across the lease to help minimize customer disputes

The benefits of blockchain are most prominent at the end of the lease term, when a customer returns a leased vehicle. The use of an open distributed ledger eliminates any disputes that may occur between the service provider and end client, with regards to end-of-lease charges. Transparency across the lease lifecycle, including open logs of vehicle usage, mileage, fuel, maintenance, tire changes, and insurance, make it easier to calculate any end-of-lease charges, based on the pre-defined terms of the smart contract. These charges can also be automatically paid in the form of cryptocurrencies or tokens, as per the provisions in the smart contract.

Blockchain entries can also help leasing companies estimate the approximate value of the vehicle at the end of the lease term, making it easier to decide whether to remarket (re-lease) or dispose of the vehicle, as well as reducing the overall time and resources required in the remarketing process.

The global automotive blockchain market is likely to witness growth of 31.1% CAGR between 2020 and 2030, with Asia witnessing the fastest growth. Majority of this growth is attributed to proliferation of car rental and leasing in countries such as India and China, where people are seeking easier means of mobility and are making cautious effort of reducing traffic in metro cities.

Several companies in the region started investing in building platforms using blockchain. In 2017, Mumbai-based Drivezy, an Indian car sharing company, successfully developed a car rental and leasing platform using blockchain, in which users can rent cars and make payments using cryptocurrencies and tokens. In 2018, the company raised US$20 million in a Series B funding through an initial coin offering (ICO). Such investment is encouraging further start-ups looking to utilize blockchain for car rental and leasing.

Darenta ICO, a Russian car rental start-up, developed a platform for existing car owners to rent out their cars using a digital solution that employs geolocation, smart contracts, and other blockchain technology. Launched in 2018, the company has already expanded its presence in 20 countries, and plans to enter the USA and Canada, followed by other European and Asian markets (including China) by 2020.

Several major companies have also invested in developing other technology platforms using blockchain technology, which could have applications in the rental and leasing businesses. In 2017, Ernst and Young, for example, launched a blockchain-based platform called “Tesseract” to support an integrated and autonomous mobility. Through this platform companies and individuals can share cars, while payment and insurance are handled through blockchain. In 2017, Renault also launched a prototype blockchain platform to track information about a car’s maintenance history, including repair shops and dealerships at one place, through a digital maintenance log prototype.

Explore our other Perspectives on blockchain

Lack of acceptance of cryptocurrencies likely to pose challenges

While blockchain has plenty of benefits, broad scale deployment of the technology faces certain challenges as well – one of the most crucial ones being recognition of cryptocurrencies in key emerging markets in Asia, including India and China. Most blockchain-based solutions are looking at ICO to generate funds, issuing their own cryptocurrencies (mostly based on Ethereum tokens), which also act as a mode of transactions and payments for the service. Lack of regulation of cryptocurrencies is currently limiting the adoption of blockchain technology in the rental and leasing space.

Currently, blockchain is considered synonymous to cryptocurrencies such as bitcoin, which is still very unstable and is commonly seen as an investment rather than a mode of transaction. Such a perception is likely to continue to prevail in the short term. Once the paradigm shifts from cryptocurrencies being looked at as a mere investment tool, to being considered as a mode of transaction or a trustless platform, which utilizes inherent properties of blockchain, the overall acceptance of blockchain is also expected to increase. This shift is also likely to bring more stability in cryptocurrency prices, which in turn is also expected to generate a more positive regulatory outlook in favor of cryptocurrency and blockchain technology.

Once blockchain gains prominence, we are likely to witness a lot more start-ups promoting peer-to-peer car sharing (rental or leasing), driving a change in the way people look at their cars. Idle vehicles will increasingly be considered as assets which can generate a source of additional income via car sharing model, resulting in better overall utilization of cars.

ICOs are likely to remain the most common mechanism to generate funds. While the technology has several potential uses, which are expected to disrupt the car rental and leasing market in the near future, the state of blockchain acceptance currently remains highly speculative, primarily due to its close association with cryptocurrencies.