Home TECHNOLOGY Sharing Economy in the GCC: A Success Story Waiting to Happen

The current landscape in the Gulf countries is believed to show solid scope for sharing economy platforms’ growth. On the other hand, the region still lacks consumer engagement as well as updated and adequate regulations, which may cause these platforms to stumble and fall on their way to growth.

The concept of sharing economy has been spreading with great velocity worldwide with the advent of new technologies and connectedness. It emerged as a recognized concept around 2008-2010 with the arrival of successful players such as Uber and Airbnb offering P2P platforms that allowed financially strapped consumers to earn extra income. Global sharing economy was valued at US$15 billion in 2014 and is expected to reach US$335 billion by 2025.

The spending in sharing economy was of course lower than spending on similar services acquired through traditional avenues – for instance, in 2016, hotel revenues were expected to hit US$24.9 billion in the GCC, a considerably higher sum than accommodation revenues in the sharing economy that totaled to US$1.29 billion in that same year. This indicates latent potential, and with part of the traditional service revenue possibly taken over by sharing economy, the scope for growth is very promising, underpinned by favorable characteristics of the GCC countries.

Sharing economy platforms do not hire employees directly but work with self-employed service providers instead. The essence of these platforms is to enable people – mainly young, dynamic, and technologically-participative – to use them as a way to exchange goods or services for money.

Another market growth driver that is somewhat unique to the region is the large percentage of non-nationals living and working in the GCC. Between 2016 and 2017, 51% of the Gulf region total population were non-citizens, who, according to a 2016 PwC survey, were active users of the sharing economy services, largely due to relatively low incomes and limited (if any) access to other ways of improving their financial standing. The region’s large volume of immigrants has always been a steady trait that is very unlikely to change in the future. Due to this, high numbers of expatriates participating in the sharing economy platforms on a daily basis is likely to ensure a long-term steady growth of these platforms in the region.

Another appealing aspect of the GCC market is that all six countries have been changing (alas, slowly) their attitude towards women’s economic inclusion, fueled by shifting cultural norms that traditionally imposed limitations on women’s ability to work and earn.

This change is likely to allow them to participate more actively in the workforce, and a ride-hailing app company could be a good option to provide transportation to and from work to female workers, since in some GCC countries they are not allowed to drive by themselves, while in others they customarily do not often do it. With women representing around 40% of the GCC population, higher financial independence places them in the group of potential consumers of sharing economy goods and services for their transportation as well as household services needs.

Regardless of the gender participation mix at both supply and demand side, the sharing economy players are certainly set to benefit from fast adoption of technology by local consumers in the GCC. In 2017, 64% of the population owned a smartphone and, by 2018, 77% of the GCC population were mobile network subscribers. Such rates seem to give strong foundation for sharing economy platforms to grow.

Moreover, the GCC highly tech-savvy youth seeks new technologies and faster mobile connections. In response, the Gulf countries aim to become global leaders of 5G deployment (all markets planning to launch 5G by 2020), a major contributing driver to the sharing economies growth in the region. High-speed mobile connections plus a growing pool of eager-tech young adults willing to engage in P2P platforms are likely to become a major driver for their growth. 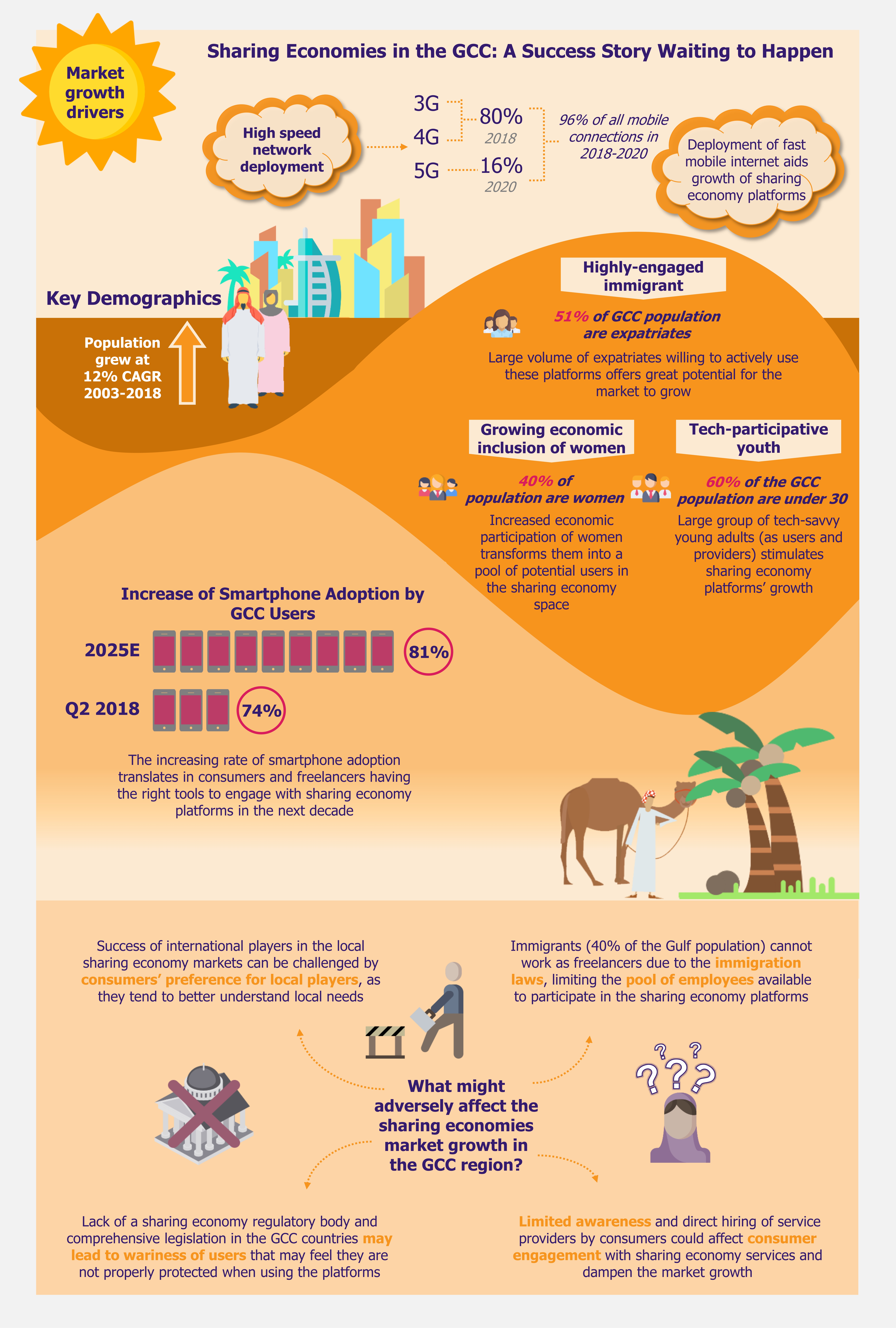 Nonetheless, despite these favorable foundations, there may be roadblocks representing a threat for the success of sharing economy platforms in the Gulf region.

One of the key obstacles is the cultural-legal environment prevalent in the region. While the region has long been characterized by large share of immigrants in local populations, their way of working is controlled by Kafala, an outdated sponsorship system carried out by the GCC. This system allows immigrants to work in the region only for their sponsor, who is legally responsible for them during the time of his or her stay.

Kafala system does not allow for self-employment, nor does it allow for second employment beyond the job given by the sponsor. Since sharing economy companies interact mainly with freelance service providers, there is a large portion of expatriates working in the GCC who will find it difficult to be able to freely join the platforms as service providers.

Explore our other Perspectives on sharing economy

Lack of legislation and consumer protection

Lack of a dedicated government entity to oversee sharing economy services in the Gulf countries may cause consumers to be wary of using these platforms, ultimately hindering market growth.

According to a 2016 survey conducted by PwC, GCC users put considerable emphasis on trust and transparency when dealing with online providers, two factors that can influence their purchasing decisions.

In sharing economy, users need to be able to trust platforms’ screening process for providers before they deal with them. As a result, if the states do not establish bodies and laws governing sharing economy services, the platforms could witness weak demand from both consumers and services suppliers who are cautious about protecting themselves.

Limited awareness and lack of need

According to the same PwC survey, an average of 21-35% of respondents were not familiar with the sharing economy concept. This could be attributed to the fact that many households in GCC countries have traditionally enjoyed high income levels, a fact that resulted in no need for shared services and allowed them to afford services of expatriate workers hired directly and for long term (e.g. employing a household driver or cleaner, rather than using external providers as needed).

Consequently, local consumers may not see the need to use an online platform dampening the success of sharing economy platforms. This might change, as households’ incomes growth stagnates and sharing economy could help stretch that income.

The GCC countries could be a promising landscape for sharing economy platforms to dock successfully. The region offers growing population, continues to be characterized by a solid base of young, tech-savvy users, as well as females and non-citizens available to participate in the sharing economy market.

However, despite the current growth, these platforms could nosedive unless local authorities deal with regulatory deficiencies. A dedicated supervisory entity is required to allow local authorities to regulate sharing economy companies, which will also provide support to consumers through consumer protection and better screening processes of services providers. Local customers clearly manifest their need for such a protection, and the lack of it is likely to dampen the demand and thus market growth.

The update of labor policies such as the Kafala system is also required for sharing economy platforms to witness a continuous growth. This growth can only happen through allowing a good share of the readily-available pool of expatriates to work under a more flexible scheme these platforms require. This is something for GCC states to consider, as there region is increasingly facing the requirement for economic diversification and stimulation of its sluggish economies. Creating labor policies that allow people to work for sharing economy platforms legally (at least as a secondary employment, as it is increasingly allowed in Dubai) is likely to create employment opportunities across the region, spurring consumer spending and generating tax revenues.

While there also are other obstacles in the GCC sharing economy market, it is the lack of appropriate regulation and supervision of the industry, as well as the current form of the Kafala system that are the two key challenges to the market’s accelerated growth. Considering the nature of these challenges, it seems that the potential of this market is unlikely to be realized without active facilitation by the local governments. However, it is uncertain to what extent the governments will try to understand the potential economic benefits of fully embracing sharing economy, and change the deeply-rooted, long-standing, archaic labor laws.