Blockchain has now been widely accepted as a technology offering superior capabilities when it comes to data security, transparency, and immutability. This has made it extremely relevant in industries, such as finance and healthcare, where security is critical. However, after getting a foothold in such industries, the technology is extending its reach beyond current uses into other sectors. One such industry is education, where blockchain can facilitate a safe, secure, and auditable ledger covering all education-based data and transactions. However, since blockchain is still new and relatively unexplored in this space, its wide applicability and commercial acceptability is yet to be proven.

Blockchain is fast finding its ground across several industries and education industry seems to be no exception. While still behind in terms of implementation, especially when compared with other sectors such as finance and healthcare, education sector is exploring various blockchain-based applications that can improve data security, facilitate degree verification, and prevent plagiarism, among other things.

Read our other articles on blockchain where we talk about the technology gaining prominence in several industries, including healthcare, retail, banking, car rental, and aviation.

Industries such as finance and health have been using blockchain to protect their customers’ data. Blockchain can find similar application in the education sector, which is also highly susceptible to data breaches. As per Gamalto, a Netherlands-based international digital security firm, in 2017, the education sector was third (after finance and healthcare industry) with regards to the highest number of experienced data breaches, accounting for 13% of all data breaches across industries.

The use of blockchain to protect student information and records can help mitigate the issue of data breaches. With schools and universities storing data digitally on blockchain, they would be able to store and share student data without making it accessible to hackers. Moreover, data stored on blockchain would help improve transparency and accuracy, reduce human errors and paper-based processes, and eliminate fraudulence.

With schools and universities storing data digitally on blockchain, they would be able to store and share student data without making it accessible to hackers.

Data being stored on blockchain also helps employers be assured that the candidate or student seeking employment has authentic degrees and qualifications.

In February 2019, the Maltese government signed a contract with blockchain startup, Learning Machine, to store all educational records and certificates in the country on a blockchain. The project is a two-year pilot project and aims at ensuring that all educational certificates, including university and secondary school certificates (encompassing state, church, and independent schools), are issued and stored on blockchain. The project is expected to minimize bureaucracy and provide greater security for students’ private data.

Currently, most institutions store student data within their own systems and the student needs to approach the university to obtain the certification. Alternatively, prospective employers need to verify the authenticity of a candidate’s certificates from the respective university/institution. In cases where a student has multiple degrees and certification, this process becomes cumbersome and susceptible to errors.

Blockchain-based diplomas can offer an easy solution to this issue. With certifications being stored on a blockchain, students can obtain fast and easy access to their records and can share them with potential employers without the latter being concerned about their authenticity.

With certifications being stored on a blockchain, students can obtain fast and easy access to their records and can share them with potential employers without the latter being concerned about their authenticity.

Moreover, in case a university closes down or the credential records are destroyed due to extraordinary circumstances (fire, earthquake, war, etc.), student’s certifications still hold merit and would be verifiable based on blockchain records.

In 2017, MIT introduced a pilot program under which it offered digital diplomas to 111 graduates in addition to the traditional diplomas. These graduates were given an option to receive their diplomas on their smartphones via an app, called the Blockcerts Wallets. The pilot project, which was a partnership between MIT and Massachusetts-based software firm, Learning Machine, enabled students to quickly and easily share a verifiable and tamper-proof version of their diploma with prospective employers, other schools, as well as friends and family.

Apart from MIT, several other institutions offer digital credentials through blockchain. For instance, Open University’s Knowledge Media Institute (KMI) was awarded about US$550,000 (GBP 450,000) in 2018, to develop and employ blockchain technology to allow learners to manage and verify their educational and employment records.

Plagiarism is a big issue in the academic world, with people having easy access to other people’s research or educational resources for free over the Internet. However, the use of blockchain can effectively address this problem. One of blockchain’s key characteristic is that information can be securely stored without being tampered with. Thus, academic materials stored in a blockchain-based platform can be accessed by public but cannot be altered or plagiarized. Moreover, any contention regarding originality of information can be tracked and protected with a time stamp.

One of blockchain’s key characteristic is that information can be securely stored without being tampered with. Thus, academic materials stored in a blockchain-based platform can be accessed by public but cannot be altered or plagiarized. Moreover, any contention regarding originality of information can be tracked and protected with a time stamp.

Taking things a step further, teachers or publishers could be awarded crypto-coins for the reuse of their material through smart contracts. This way publishers would not have to use intermediaries such as research journals, which charge high fees and thereby limit access to the material.

Education industry still operates in a closed and centralized way with universities and education providers giving credentials for courses through their own diplomas and degrees. Even in case of digital education solutions, there is always a body providing credentials for the course undertaken. Due to this, education remains relatively expensive and not approachable by all.

However, blockchain-based platforms can help solve this problem by creating decentralized education marketplaces, where the quality of education provided is validated by students and educators participating in the course. Using blockchain, these marketplaces connect students and professors who in turn use smart contacts to undertake the course they are interested in. At the end of the course the student receives an immutable certificate of completion and the ledger records the professor who taught the course.

An example of such a company is Switzerland-based ODEM, which was founded in 2017. ODEM is a blockchain-based decentralized marketplace for educational products and services, wherein professors and students come together to teach and learn various courses. The two parties engage through smart contracts and the ODEM ledger recognizes the courses a student has taken or a professor has taught, which boosts their reputation on the ODEM platform. Moreover, ODEM creates ‘skill badges’ for professors and students who complete courses in their network. This helps the decentralized platform as more students wish to undertake courses with professors who have multiple skill badges (thereby higher proficiency in the subject), while professors are also more interested to work with students with multiple badges (i.e. have displayed interest to learn and expand their skill set in the subject).

Several other blockchain-based education marketplaces have emerged. In February 2018, a blockchain-based university, called Woolf University was founded, which allowed any accredited educator to launch and teach courses that would advance users toward a degree. 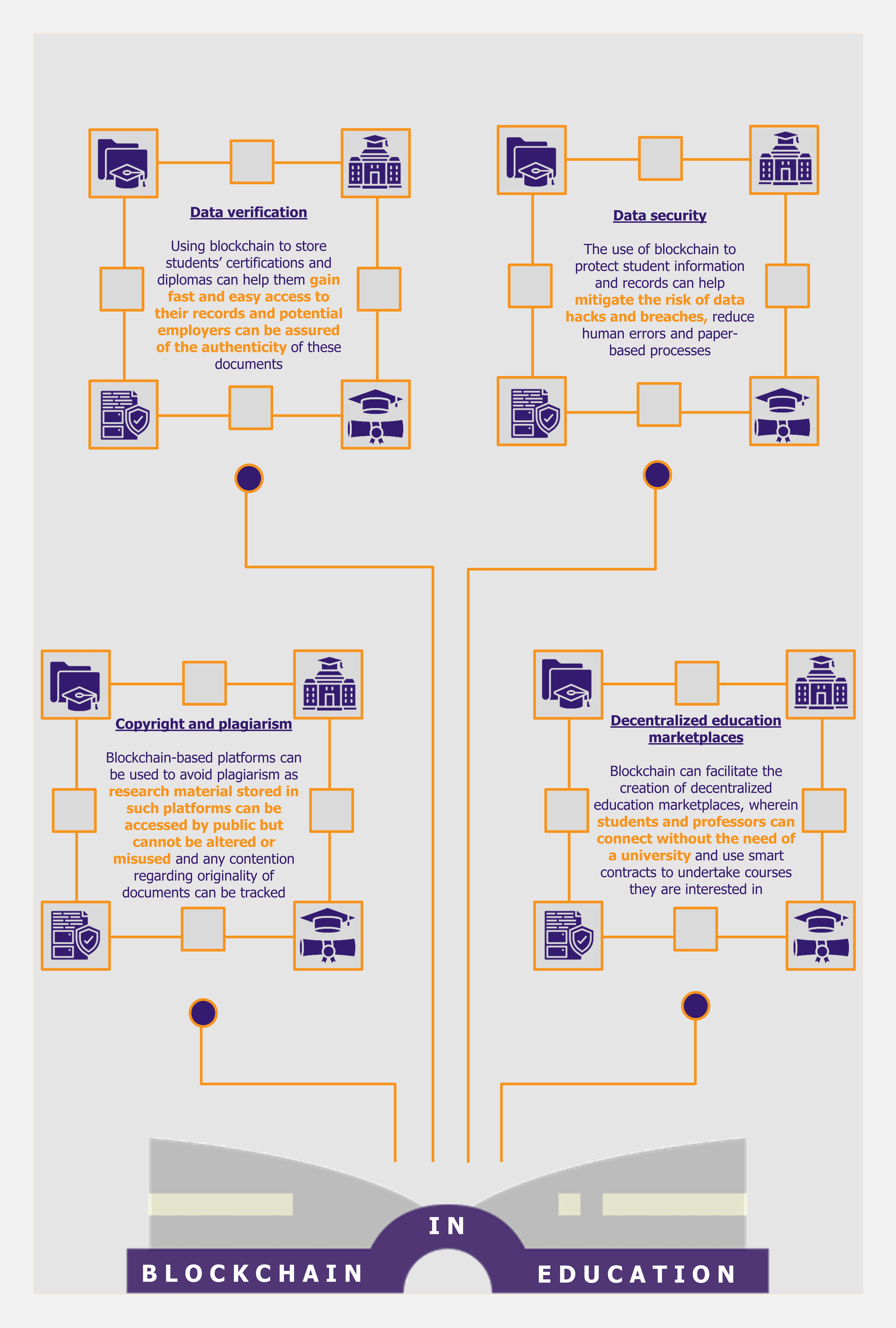 In addition to this, blockchain increasingly finds application in other educational areas across the globe. In Kazakhstan, the government is using blockchain to manage the national school enrollment of young children to kindergarten. In Kazakhstan, all parents need to apply for their children’s enrollment in local kindergartens, which results in waiting lists for several such institutions, and these lists are managed by the state. In February 2019, the government decentralized the system and put it on a blockchain in order to optimize the waiting list and make the process more transparent.

Similarly, blockchain is also being used for test prepping and learning. Blockchain-based platforms can assist students in preparing for tests as this helps students keep track of their progress. One such example is a chatbot app by Opet Foundation, wherein students can ask questions regarding any subject, the app recommends resources for further studies based on current proficiency, and tracks learning progress through blockchain technology.

Blockchain is also being applied to improve and expand school library systems. With blockchain, schools can create and manage a distributed metadata system for libraries that would allow peer-to-peer sharing of books and other reading material. Also, it will assist in management of libraries as the technology keeps detailed logs of what books are going out and which ones are being returned in an error-free and meticulous fashion. In November 2017, the Institute of Museum and Library Services gave a US$100,000 grant to the San José State University, School of Information to explore blockchain applications in libraries encompassing building an enhanced permission-less metadata archive, supporting community-based collections, and facilitating better digital rights management.

Blockchain-based applications are gaining momentum across industries and the education sector is no exception. As in many other sectors, blockchain has the potential to revolutionize the industry, especially with regards to storing data and sharing credentials. Several start-ups have entered this space and are already challenging industry norms.

More so, blockchain-based start-ups in the education sector are becoming even more relevant as the world struggles with calamities such as bush fires or the coronavirus pandemic. As schools and universities shut down due to the ongoing pandemic, blockchain-based platforms play an important role in ensuring that education is not disrupted. Recently, blockchain-based educational platform, Odem, has offered its online integrated learning platform and certification management system free of charge to schools and educators that have shut down due to the virus scare. In the midst of the pandemic, the platform has received interest from Italy, Ireland, Germany, Cairo, and the USA, with a US-based University discussing uploading about 500 courses onto the Odem blockchain to combat class time lost due to the outbreak.

While blockchain appears to be in a strong position to reinvent the education sector, it is easier said than done. Blockchain requires alterations in industry-wide business processes, which not only require significant amount of investments but also involvement of government bodies to develop blockchain regulations as well as build the requisite infrastructure for the technology. Currently the cost of processing and storing data through blockchain is high and scalability remains an issue.

Moreover, currently most schools across the globe have their own systems to store and manage student’s information, progress, and certifications. These would require to be standardized if the use of blockchain grows and new standards would need to be developed. This is an extremely tedious and time consuming procedure and several schools may not be interested in sharing information with third parties.

That being said, blockchain is expected to penetrate the education sector in the years to come and many institutions have already started toying with the technology and its applications. However, just like in case of some other industries, it is yet to be seen if blockchain manages to revolutionize the entire industry or offer few niche applications in some areas and limited geographic scope. It will have a lot to do with the cost and ease of adaptation of the technology in already exiting school systems.