Cambodia is a low income country (GNI per capita US$880 as of 2012) with a population of about 15 million (67th most populous country as of 2012). Though the country has witnessed concentrated efforts towards better healthcare infrastructure and services since gaining independence in 1953, the major push came only in 1993 after the establishment of a dedicated Ministry of Health (MOH). The MOH has been consistently working to overcome major healthcare-related challenges, such as widespread malnutrition, high mortalities from communicable diseases, and low access to healthcare. MOH’s Health Sector Plan (HSP) (2008-2015) focuses on developing healthcare infrastructure and ensuring that healthcare services reach the entire population.

Social Health Insurance (SHI) is still in early stages of implementation, and will take some years before it is firmly established. The SHI Master Plan was launched in 2003 with an aim to develop a stable financing system, and to promote equity in healthcare access. Currently, people from poorer sections of the society and informal sector are covered through Health Equity Funds (HEF) and Community-based Health Insurance (CBHI) Plans. The government plans to introduce a single health financing system by 2015. 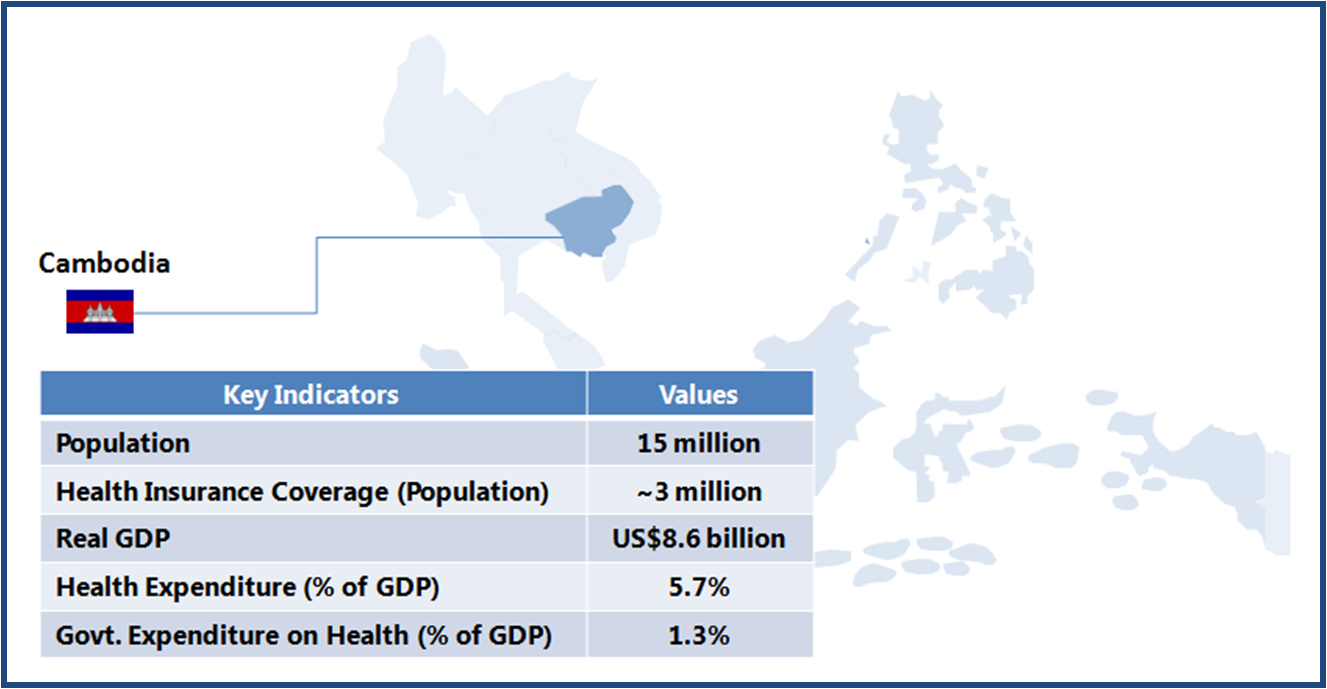 About 2.5 million poor and more than 500,000 individuals from the informal sector are covered by HEF and CBHI plans, respectively.

When implemented fully, SHI is expected to provide healthcare protection to urban and rural poor (among others). The success of SHI would depend on the government’s ability in establishing healthcare infrastructure in places where it is currently unavailable, devising a suitable taxation/financing mechanism to support it, and in ensuring an optimum coverage of health conditions. The current design and support infrastructure would determine the long term success of SHI.

The SHI system is still in early stages of development in Cambodia and the government needs to work on both infrastructure and design to ensure success of the scheme. SHI will be effective only if the people under coverage avail healthcare services through it, for which government healthcare services need to be at par with the private system. Provision of OPD services under SHI coverage will also help in greater adoption of the scheme.

Participation of the informal sector population is key to the success of the scheme from a financial perspective (ensuring adequate funds and lower reliance on foreign aid), and for meeting the key objective of ‘healthcare to all’.

From the perspective of healthcare industry participants, Cambodian healthcare service providers are likely to gain the most if the government expands services to a larger set of population (based on positive outcome from previous experiments). On one hand, lack of adequate equipment provides a strong opportunity for medical devices companies, while on the other hand, the expansion of in-patient services (as more people are covered by SHI) should provide an impetus to pharmaceuticals companies. For pharmaceuticals companies, the growth potential may not be fully realized unless OPD services are also covered under SHI.