Thailand has a well-developed healthcare system, as compared with most of the Asian countries. Majority of the health-related Millennium Development Goals (MDG) have been achieved, though a rapidly ageing population and the burden of non-communicable diseases remains a challenge for the public healthcare system. A better disease prevention mechanism, health promotion, and adequate primary care are some of the priorities of the Thai government in the healthcare sector.

Thailand achieved Universal Healthcare Access (UHA) status in 2002 with the launch of health insurance benefits for 30% of the population that was outside the health insurance ambit till then. 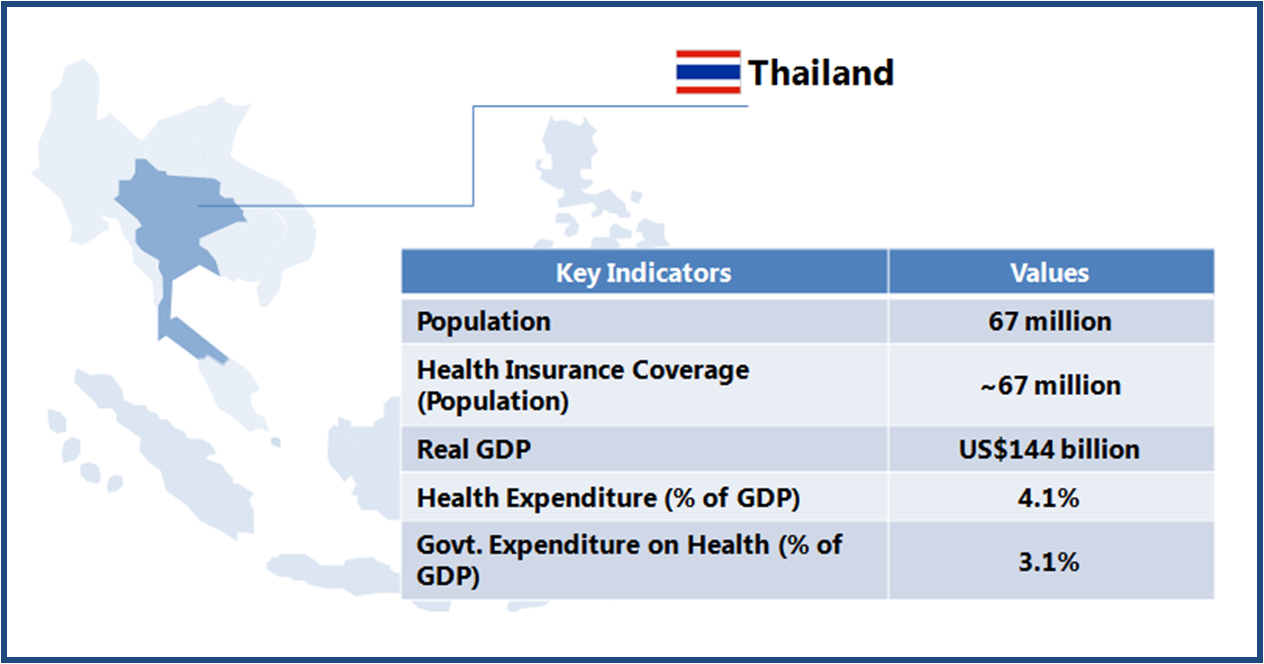 Thailand boasts of world class medical facilities (especially in the private healthcare sector), and is among the world’s largest medical tourism markets. The government is looking to further develop Thailand into an “International Health Center for Excellence” under its second strategic five-year plan (2012-2016).

With almost 100% population already covered by UHA, and a reasonably developed healthcare infrastructure in place, the government’s focus is likely to be on improving the quality of healthcare services. This will create opportunities for the companies operating in the healthcare industry.

Thailand’s UHA scheme has largely been a success, and a model for other countries to follow. The scheme provides coverage to a large informal sector, which is a challenging task in itself. The benefit package, which includes curative as well as preventive services, is comprehensive.

The country has demonstrated efficiency in UHA implementation with satisfactory outcomes in terms of meeting healthcare needs of the society, and in attempts towards offering equitable health. A relatively better developed healthcare network and relevant administrative experience helped in achieving the desired results.

Leaving behind the past successes, UHA would be required to gear-up for the challenges ahead. For instance, the country needs to plan for changing disease profile i.e. an increased burden from Non-communicable Diseases (NCDs). This may have cost implications for UHA (and opportunities for the healthcare industry participants) in terms of accommodating suitable interventions and planning for adequate preventive measures at primary, secondary, and tertiary care level. It is expected that the country will witness more activity with respect to qualitative improvement in healthcare services, as compared with geographical expansion of services.

A comparative with other countries in the region should provide a better perspective on the actual potential of Thailand as a prospective destination for devices and drugs companies alike.